Officially free from the shackles of exams!!!! Ok fine so I only had 2 papers but still!

Been bumming around as per usual since Friday and tomorrow I'm going to Dublin to see Marissa and hang with her for a bit before the family comes! Very excited to see Mars and to see Dublin! I've never been to Ireland (nor Scotland for that matter) so I'm super super looking forward! 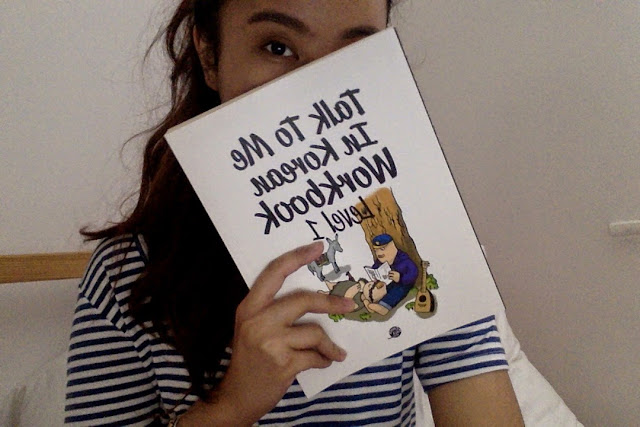 Been occupied with learning Hangul again. Had to leave it aside for a bit as I was studying more important things hahaha so I was so so happy that my book that I ordered a few weeks back finally came ! And on the day I finished my exams at that! Kihkih talk about good timing.

I'm actually on Level 5 on the TalkToMeInKorean website but I decided to just try out one book first and see how I like it. Since it's quite basic, I've already done half the book in a span of 2 days. I could've done it in a day to be honest but didn't want to because then so boring haha. I'll order the remaining books once my parents come over so that by the time I arrive KL, there'll be all there waiting for me.

I'm taking learning Hangul rather seriously actually. Everything about the Korean culture and language, I'm really fascinated and intrigued by so I guess, in a way, it's a good thing? I was thinking of enrolling myself in a Hangul class in KL but most of 'em have already started and I will be back by mid June insyaAllah so don't know how that's going to work.

Fun fact : I don't know if you know this about me but I love languages. I love how a certain language is only to a certain group of people. And how one can be totally isolated or assimilated into a culture just by learning the national language. Obviously, it's no easy feat to be able to master a language. I'm the kind of person that if I can't learn it or master it in a relatively short time, I won't even pursue it. Which is horrible because learning something new takes some time to be a pro at. Language obviously takes a VERY LONG time. I'm giving myself a good 4 years to learn and practice Hangul before I can call myself a pro conversational speaker. 4 years sounds soooö long but I'm just going to persevere and stick it out because I finally want to see if it pays off. I've been trying to learn Italian and French over the years (since I was about 13) but I've always just slacked off and became disinterested over time. But I wished I just held on to be honest! Imagine learning and practicing French/Italian since 13?!?!?!?! That's almost 10 years of practicing. I should be super pro now.

So that's why it's kind of like my little own project for myself. I was Youtubing foreigners speaking Korean and from their experience, they've been learning Korean for a good 5 years (on average) so I figured I should do the same.

Hopefully in 5 years time, I can watch a Korean drama and listen to Korean music without having to refer to subtitles/lyrics!

xx
Written (technically typed) by Nadia Zainudin at 2:05 AM