I have an intense love-hate relationship with long weekends. I look forward to it and I bask in my fort of pillows and Korean dramas but at the same time, I'm so fidgety and I need to do something. But I end up not doing anything because I can't be bothered to drive anywhere! Frustrating but I'm trying to still just be happy with the fact that it's Monday tomorrow and I don't have to wake up early for work.

So other than watching endless Youtube videos (anyone knows of a good Youtube series to watch? I've pretty sure I've finished watching all of Buzzfeed's and Vox's videos), it has dawned on me that next Sunday is 2017. How quick has that been?? It got me thinking that I need a new approach for the new year so instead of a new year resolutions, I'm going to make monthly resolutions. I brought it up to my mum and she's already announced it to the whole world via her Facebook. Sigh, parents and their FB obsession.

The whole point to a monthly resolution is that instead of having a yearly one in which I completely abandon by 4th January, I thought it'd be better to have 12 short-term ones. I think I'll be more focused and more enthusiastic to fulfil and achieve it. Right? Right.

January will be a month where I stop drinking sweet drinks (all kinds - sirap limau, coke, fruit juices, everything!). Mama was so enthusiastic, she has already planned 6 months in advance! I was thinking of doing month by month but ok....

My yearly resolution is to start saving up for my future. I should've done it long time ago hahaha but I'm going to take it rather seriously this coming year. And hope it snowballs into something big and fruitful in the near future. InsyaAllah! That and to take more photos. And not necessarily for Instagram.

I'm going off tangent but fellow K-Drama fans, can we please discuss what a GORGEOUS drama Goblin is???? Some people are having a hard time digesting the age gap between the Goblin and Eun Tak but ??? Love is love ??? It's such a well-written, well thought out drama and I'm sooooooo into it. Production wise, it's brilliant. Gong Yoo is hella dreamy!! He says everything so romantically tragic, it's breaking my heart!! I keep changing favourite actors all the time but Gong Yoo is defo top 5.
I'm also really loving Dong Wook (have always regarded him as a great actor - loved him in Bubblegum) and Kim Go-Eun is so precious here. Didn't like Cheese in The Trap but thought she was really good in it so I was looking forward to her in this drama. Overall this drama is just golden and I highly recommend it. It is kinda heavy but the characters themselves are very lighthearted, it's just the plot that gets quite melodramatic and tragic.

Oh and of course, merry christmas!! I love Christmas and I long to be back in England where Christmas was everything shiny and sparkly. I'm so dead jealous on everyone's holiday photos and their Christmas lunches and dinners. My Christmas lunch was Mama's cooking (the best ever!) and my dinner was McDonalds and fried rice. Not that festive but home is home and I'm kinda really loving it.

Wishing everyone a great week ahead! Can't believe it's the last week of 2016!

A wedding, some tears, and a lot of laughs

My weekend with friends!

I spent my Friday night watching Sing with Iman. I LOVE that movie - particularly all the singing, duh. I'm reminded again and again how brilliant Tori Kelly is as a vocalist. I haven't stopped listening to her rendition of Stevie Wonder's 'Don't You Worry About A Thing' ever since I got back home from watching that movie.

Saturday, I attended Ha's wedding. The Ha I sat with in history classes in KY. Sighhhh, I'm so elated for her. To be married to your high school sweetheart is everything! She looked stunning in her baju pengantin, with her husband on that pelamin. Makes me want to get married! The place was also really beautiful - she had the land next to her house look like the fanciest wedding hall. And the food was really sedap - they had apam balik!!! I'm definitely having apam balik at my wedding, y'all better be sure of that. And roti jala. And sirap limau because it's my favourite drink ever. And banoffee pie for SURE. I'm definitely the kind of person to want her guests to remember my wedding for the food. 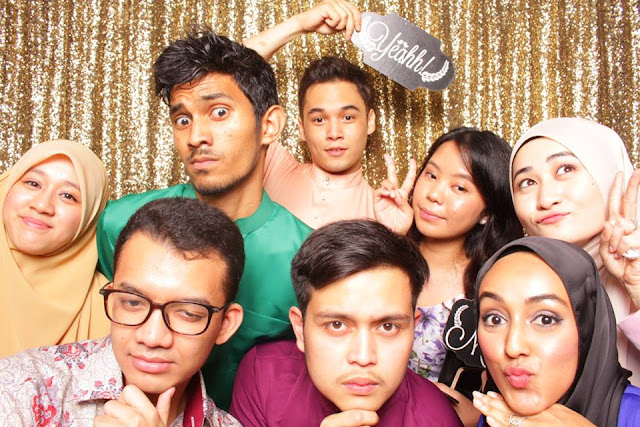 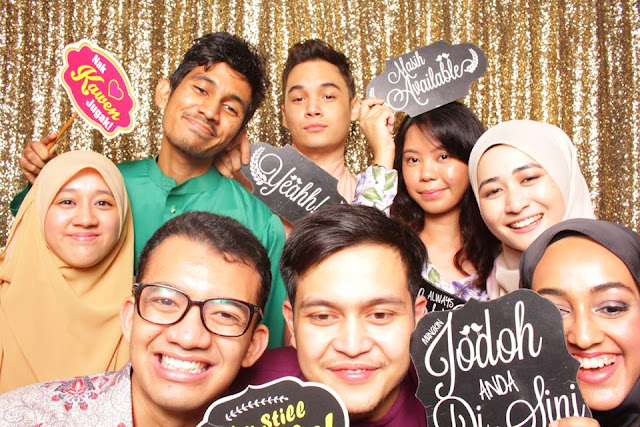 Ha had this really cute photo booth section in her house and it was really fun because they had some props and you could take the photos back home. This one was a soft copy from their Facebook page (the photo booth company is called Theseplay). Always loved these photo booth ideas. Don't worry - I'll defo have this at my wedding too. Hahaha 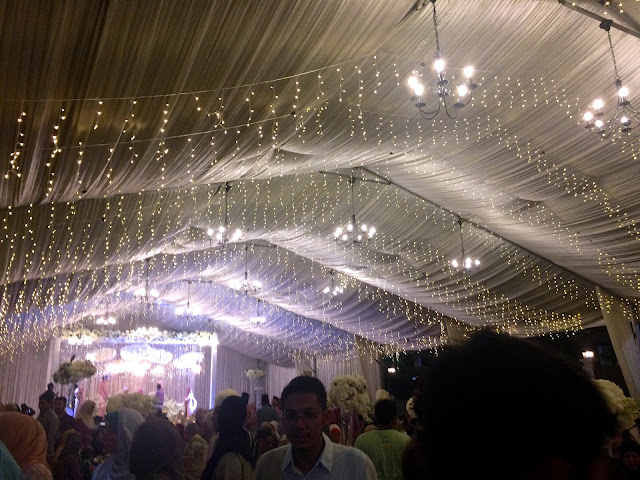 Didn't know you could make a canopy look this gorgeous! Definitely in favour of an outdoor wedding now. 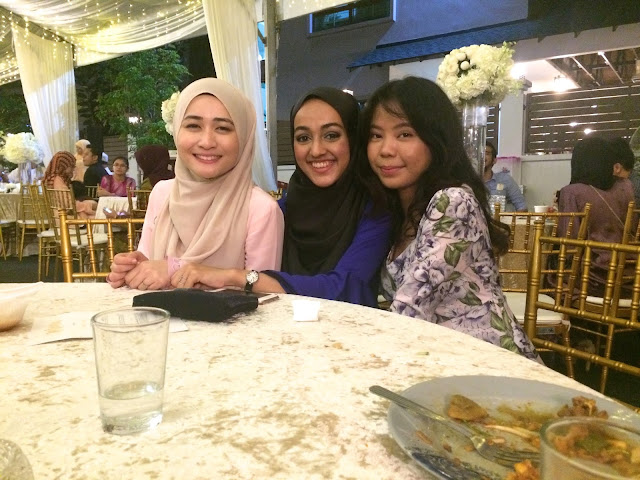 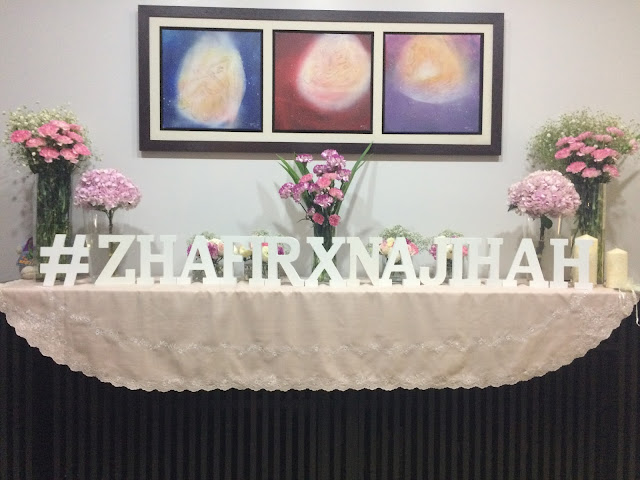 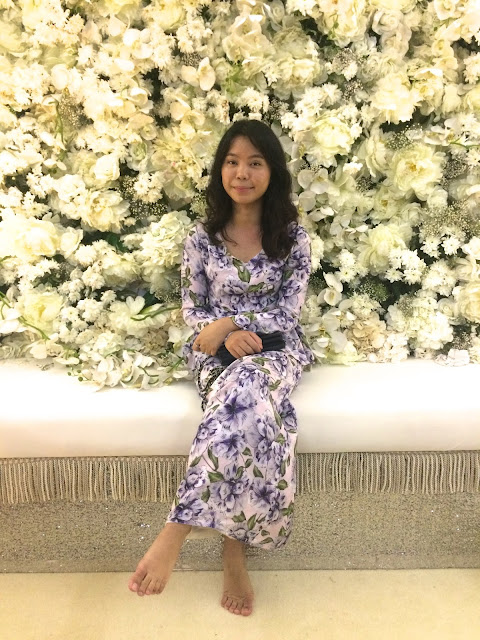 Got my pelamin - need the groom now. 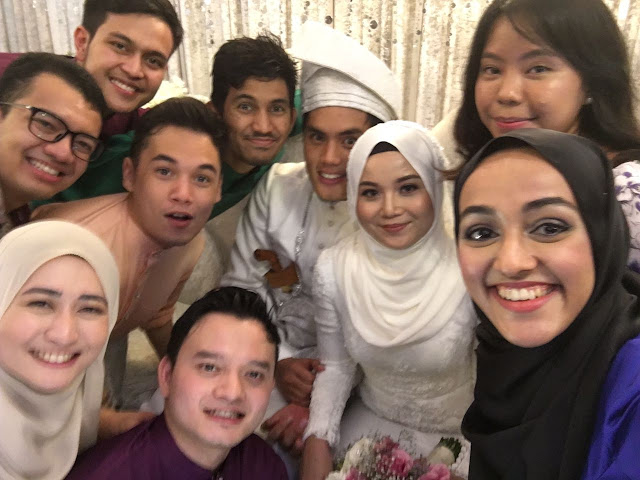 A selfie with the beautiful couple! 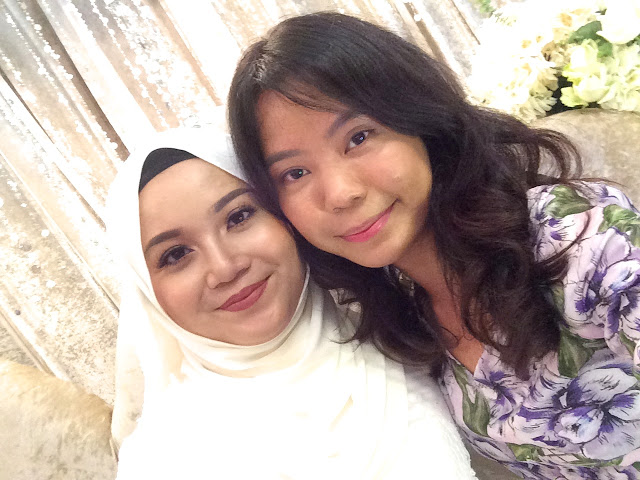 Look at how stunning Ha is - I need a moment!! So happy for her - only wishing you the best happiness and the best marriage ahead for you, darling girl! 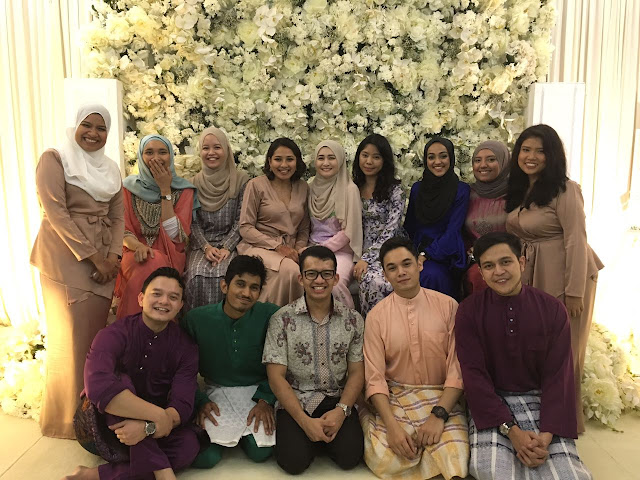 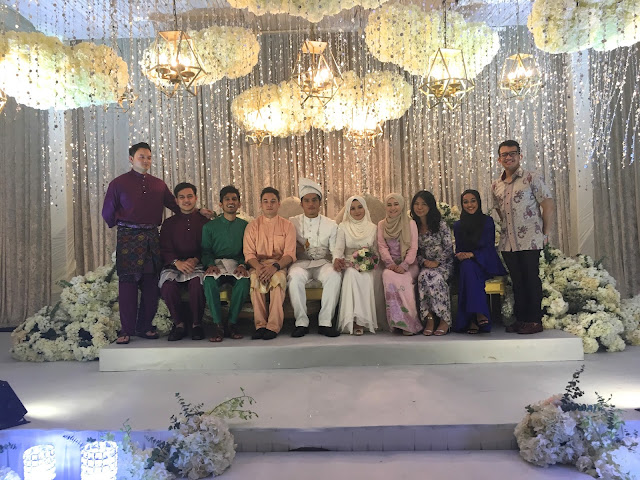 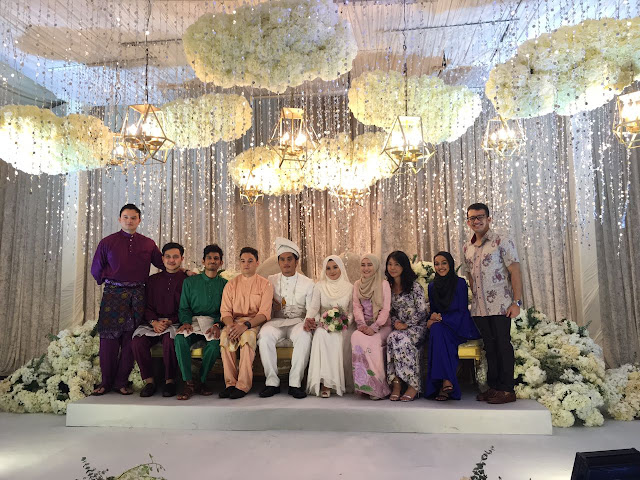 Isn't the pelamin soooo beautiful???? Sighhh my heartttttt... I'm such a sucker for weddings.

And then on Sunday, other than taking like 3 naps, I went for Kaveetha's little gathering at her house. The event was in remembrance of Hafiz. Kaveetha and Sanju, being the amazing friends they are, got us all together for some makan-makan and to celebrate him. There were some tears but there were a lot more laughs. I was incredibly excited to go for this one because it feels like it's been so long since I met this bunch of friends. I got some smack about it obviously but I loved the whole night - being with some of my very, very good friends since high school was so damn fun. Forgot how much of a good time I have when I'm with them.

Kaveetha's house was where I used to go for my BM tuition when I was in high school and she'd always host gatherings then so going to her house is like going back to being a teen. I love it. Conversations have changed but we're still the same people. We're now talking about work and our careers and who's getting married. It's so weird!!!! But so wonderful because shows how we've grown together. I had such a good time that I only left at 2:30 knowing very well that I had work the very next day. What's a little less sleep than being with friends, amirite? 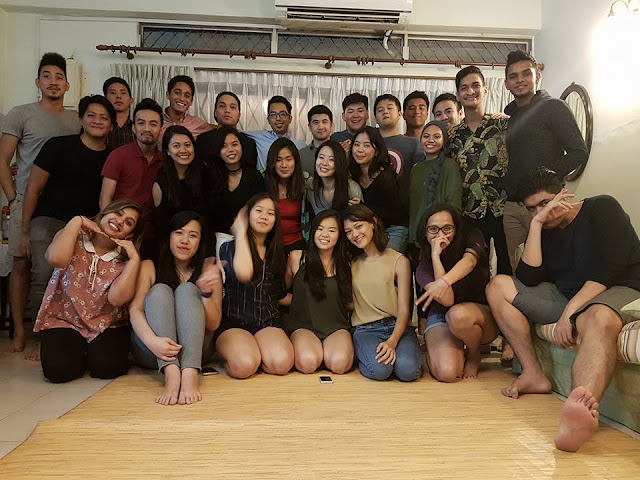 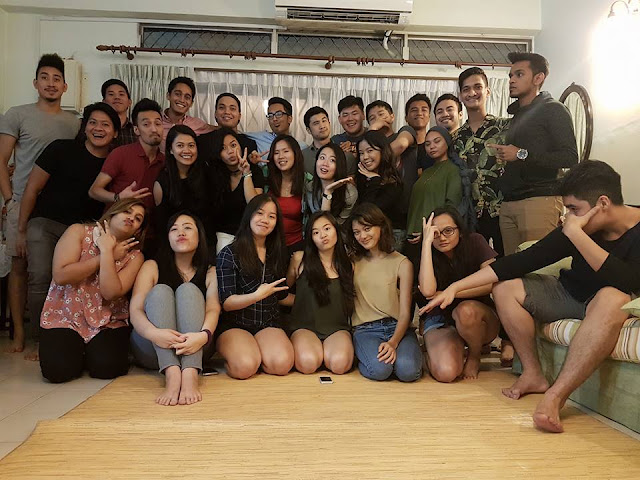 A weekend of friends - only just about my favourite type of weekends.

To more dinners, weddings, and celebrating our youth!

It's a Friday and I have next Monday and Tuesday off!!!! Yes!!! So excited to do absolutely nothing.

Yesterday and today was spent being in a exhibition on behalf of the Nelissa Hilman brand. I think one thing I've realised from working with NH is that I'm getting more and more comfortable talking to new people. I realised people aren't that scary as I had once thought. You say 'Hi' and more often than not, they're going to say hi back with a smile. I spent most of the time talking to people who had a genuine interest about the brand. Well, enough interest to walk over to me at least. I must've looked bored as heck as I had no data on my phone at all and there was no working WiFi. But nevertheless, I had a great time. I actually really do genuinely like talking to people.

Also, on a totally unrelated note but I just had to write it here so that future self can remember, I met an incredibly cute Chinese boy at one of the booths and sigh, he was quite dreamy. He actually came up to my booth when I was by myself and looked at the shoes and took one of the coupons we were offering. Ahh, my 2 day crush, how do I find you on social media??? I know where you work but how do I find you??? Kinda reminded me of my younger, naive high school days when I used to have crushes all the damn time! Hahahahaha thinking about it makes me laugh but coming across this Chinese boy at the exhibition made me really miss having someone to like! It's such a great feeling to be excited about someone so although it was short-lived, I was quite happy to have someone to be excited about. Dear Chinese boy at the GEC exhibition, thanks for igniting a missed yet completely familiar feeling in me. Twas great. Find me on Instagram. Please.

Also, you might've noticed but I've changed my blogspot to a dot com. Exciting!!!!! For me, at least. For those who don't know about the back story of my blogging, I started when I was 14. Form 2 and I had just moved to Taman Tun. A good 60% of my friends in that class were running blogs. Some updated it frequently, some not so but all the same, I LOVED reading their stories and their 14-year-old feelings that I thought I'd join in the fun. I had kept a diary before that anyway so I just thought of it as a natural millenial thing to do - take diaries on a more public platform.

And I'm pretty sure (but do correct me if I'm wrong!) that I'm the only one from that circle of friends who still keeps a blog. I'm a hoarder by nature, takes me so long to throw out things because I'm quite sentimental that way. I feel so sayang to trash things because at one point in life, it must've meant a lot to me. So I try to hold on to things til they go old and rusty but even then, I sayang. So that's why I've never been tempted to deactivate or delete my blog. Holds so much memories and old cringy stories to me! So the progression from a blogspot to a dot com was natural. Big girl already! Both me and my blog.

Don't really know what I'm going to be doing this long weekend. My mind says to do something productive like finally catching up on my Korean skills or read that marketing book I haven't gotten around to doing but my heart says to pamper and chill and maybe do a Harry Potter marathon. Or maybe finally I'll get that massage I've been wanting to do for ages.

Or maybe I'll prompt my stalker/detective skills to find that Chinese boy on Instagram/Twitter.
Written (technically typed) by Nadia Zainudin at 12:43 AM No comments:

Labels: Mindless Chatter
Newer Posts Older Posts Home
Subscribe to: Posts (Atom)
Hi!
Just a quick run down; I'm Nadia, 28 from the ever sunny Kuala Lumpur. I've been writing here since I was 14 so this blog has seen me grow from a high school kid to now a working adult and hopefully all the way 'til my older, greying days.
Thanks for dropping by and reading, great to have you here.
xx