Getting back to work

Hi!
It's now the last day of Ramadhan and Raya is tomorrow! I've been at work for about a week and a half now and it's been busy on my end. So much so that I'm actually looking to get myself blue light glasses because I had a headache a few days ago from straining my eye.
Covid-19 really has taken 2020 from us. About 2 weeks from MCO was implemented, my boss asked us all if the virus has affected our daily routine. I said no because at that point I was still skeptical and I didn't think we'd be hit too hard. At least not as bad as Italy/America. And while I still don't think we've been hit too hard alhamdulillah, I've definitely grown to become more and more cautious about my surroundings. I sanitise and wash my hands all the time, to the point that it has triggered my eczema so bad on my hands. I make sure to wipe down every surface I touch like the steering wheel or the meeting table and I avoid touching things like door handles and would only opt to use card instead of cash. So I'm definitely more aware and more alert about it. You just can never be too careful.
I haven't seen friends since the start of the MCO so that's been about a good 2 months now. We communicate regularly via Whatsapp but nothing quite like human interaction. But although I'd love to go out and meet them, I'm completely overwhelmed by the fear of contracting the virus that I'm happy to just stick to virtual hang outs and Whatsapp group chats for now.
My whole experience with MCO was so lovely. I loved being home with family and I loved working from home. I know some people don't think it's productive but err my bosses made sure we were productive. Sure, we could afford sneaking in an evening nap but we still had a lot on our plate whether they would agree to it or not.
Going back to the outside world was pretty surreal for me. My office building has quite strict SOP's set in place. And my office is just by OU so we go there for lunch everyday, and I've been just so impressed with how they're handling it. You have to scan a QR code with your details keyed in and you have to enter the temperature that's been taken by the guard. You screenshot that QR code and it'll enable to you to walk freely in the mall and shops. Some stores still require a manual log but other than that, it's been pretty easy.
Though I think shopping is no fun anymore because you have to queue to enter and once you enter, you really would not prefer touching anything. I had my hands to myself the entire time I was in Zara. Sephora has no testers and so you can't swatch anything which I completely agree to but that's like, half the fun gone when you're at Sephora. And the fact that you can't try on clothes has been such a bummer to me because I never buy anything without trying it on. But as much as I moan about it, I'm thankful that retailers are taking this seriously and I'm happy to comply to all of guidelines. The more we do to combat this thing, the faster we can get to being normal human beings!
Thinking of my dear, dear sweet Mak Tok and Pak Tok this Raya. Other than my Raya in London that one summer, I haven't spent a Raya away from them. This will be the first. I miss them so much today especially. They really have played a huge role in making Raya so special to me. They hold such a big part of my heart so not being with them this Raya feels so sad and empty. Praying that we get to see them very soon. 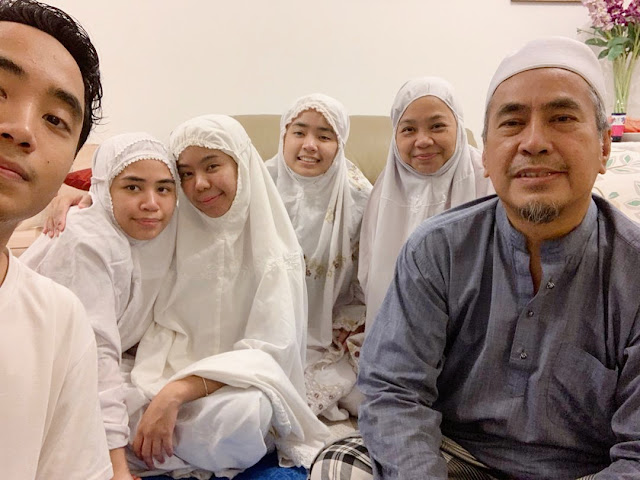 From our first terawih... 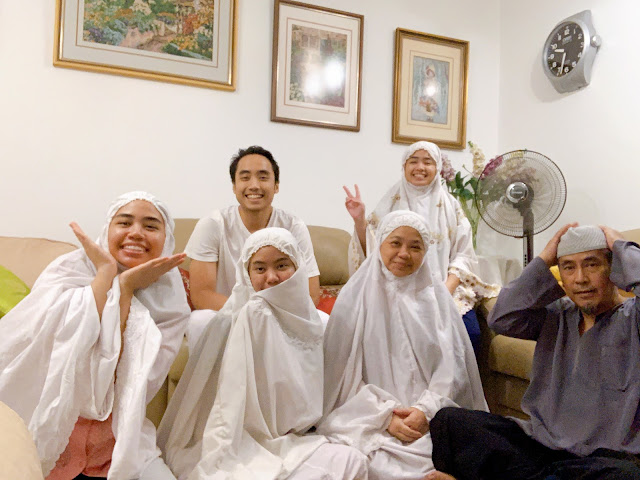 ... to our last this year. To more and more Ramadhans to come insyaAllah!
Hope you have made the most out of your Ramadhan and here's wishing the most blessed Syawal and rest of the year for you, your loved ones and the ones they love.
xx
Written (technically typed) by Nadia Zainudin at 12:50 PM No comments:

This MCO is finally coming to its end. And I miss it already! A once in a lifetime experience. Had it not actually been due to a pandemic, working from home and staying home for this long really is like a dream to me. I'm such a homebody so this was ideal for me and like I've said repeatedly, I didn't mind it at all! Maybe some days it got to me but I lucked out with my family. We get along so well so it's been non-dramatic for me. And definitely not lonely. Every meal has been so meriah with all of us at the dinner table and a full feast.

Man Repeller's Mallory Rice wrote this 'list of things I miss, don't miss, won't miss, and won't forget' and I thought it was a pretty cool exercise to do. So I did. 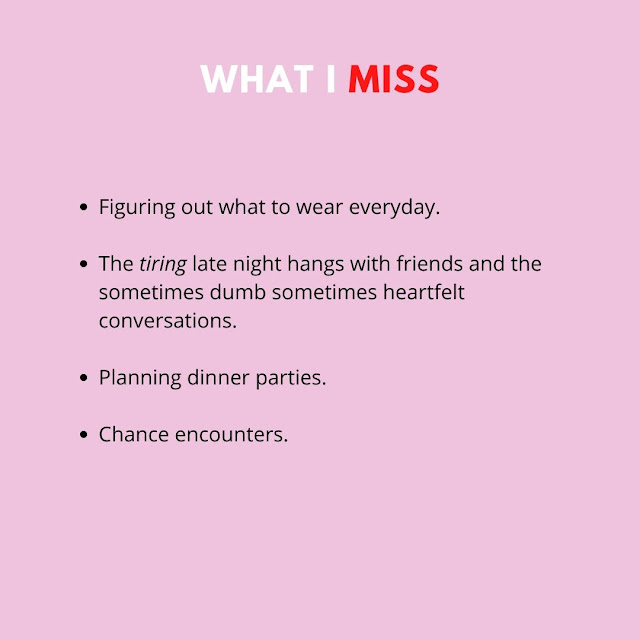 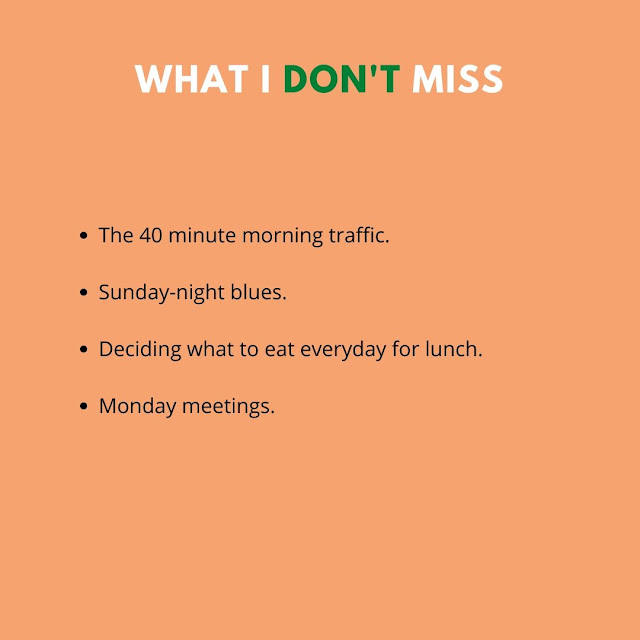 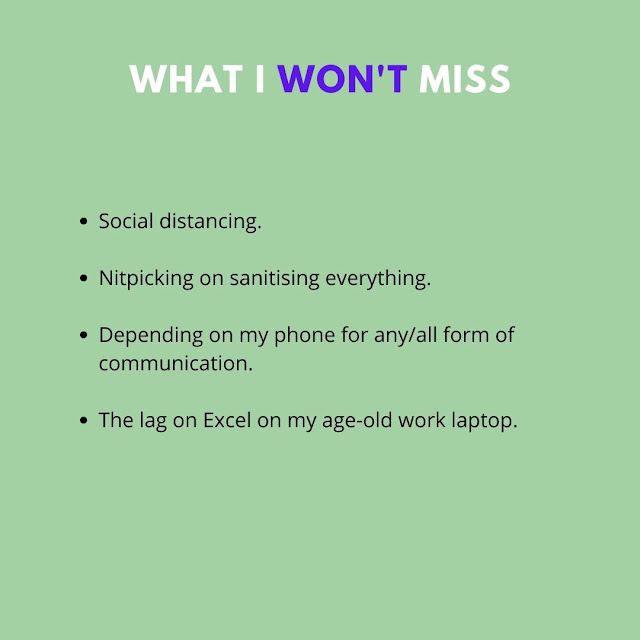 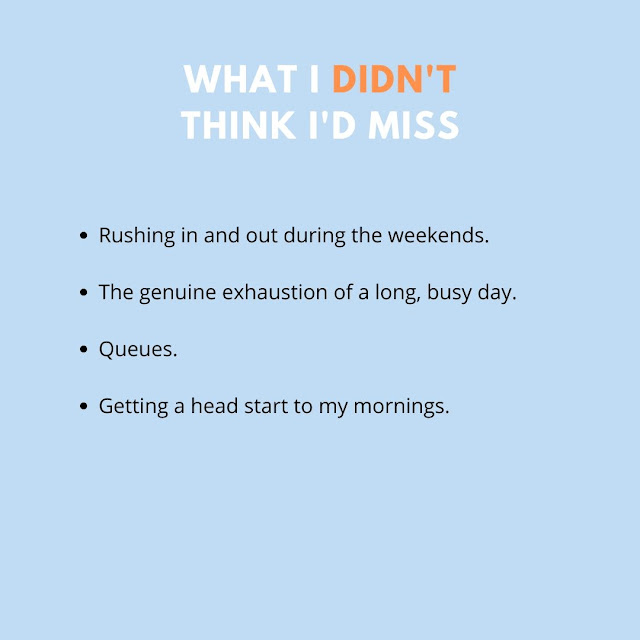 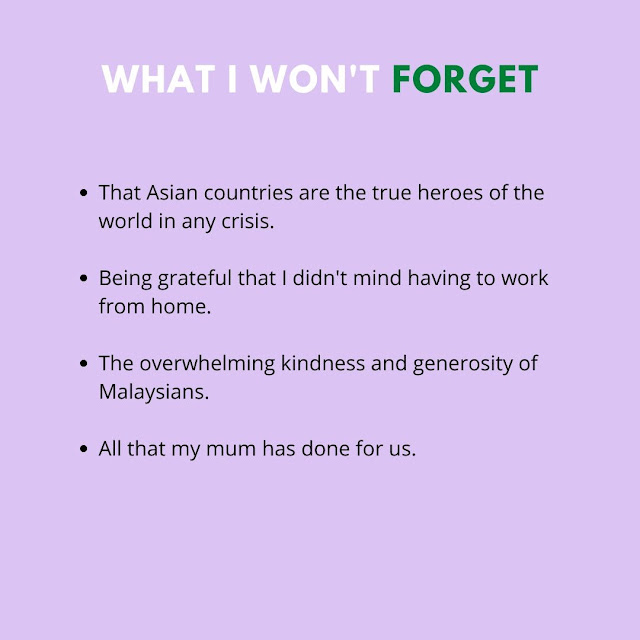 The 4th of May

Here's a rant for you.

So, the government has announced that starting 4th May, most economic sectors are allowed to operate as usual given that they adhere to the SOP. So F&B's are allowed to take in dine-in's but with that comes strict rules; taking temperature of all patrons before entering the restaurant, a limit to 1-4 people in a group at any one time, social distancing, wear masks, record contact details of everyone, etc. This in itself, is problematic. I think the government has... somehow forgotten that not all restaurants are like The Social, Super Saigon or Huckleberry that these strict guidelines can be implemented. Are they also forgetting the many, many hawker halls and kedai mamak and kedai tomyam? It was difficult enough to stop people from smoking within restaurant compounds what more for them to control the amount of people who come by? Are they joking? Is this a joke? Are the ministers so detached from reality that they've forgotten the existence of the smaller retailers who i) Don't know much about what's going on ii) Don't *care* much about what's going on iii) Don't fully understand the guidelines iv) Don't have the capacity to adhere to these guidelines.

And the PM goes on to say that he """advises""" employers to allow those who can work from home to continue to work from home. Or for employers to allow more flexible work hours as to not crowd public transportation and/or to implement working in batches. To which I say, give someone an inch and they'll take a mile. What's stopping employers to have their offices operate at a 100% capacity? It's not to say I hate going back to work. I don't! I have looked forward to returning to the office since the first week of MCO. I just personally don't think it's the right time yet to be going back to office. We're not in the clear yet so I don't get where this confidence our government is coming from that businesses can resume as usual with no risk of infections?

Speaking of which, why 4th May? Couldn't they have just stuck to the initial end date of the Fourth Phase of MCO? 12th May? It's a 9 day difference. I understand the economic downturn this virus has taken us and the PM has told us how much we've lost since the start of the MCO. Should we continue to quarantine for the next month, we'll be taking a RM98 billion hit. But wait, here comes the shocker - so is everyone. We're not the only country to be suffering. Everyone is. Literally, everyone in the entire world is going through this pandemic. Why even say 12th May in the beginning when it's going to be back to business-as-usual by the 4th May? So it's just a half-assed MCO then? Businesses have been struggling the past 45 days but we've got to be kidding ourselves if we think the economy will pick up right back where it dropped off. It'll be like this for the next year or two. It's the inevitable. Make your peace with it, damn it.

I'm just so disappointed with how things have turned out. We're putting in a laughable amount of faith in people to adhere to this post-MCO guidelines. Just yesterday I saw that Jakel will be opening again. Have y'all been to Jakel around Raya? It's a madhouse. I don't know how they think they're going to practice social distancing. How are the local tepi jalan retailers supposed to sanitise workers, sanitise utensils, take temperature, practice social distancing, record contact details? How are the authority going to monitor this? They're going to make spot check visits to all these places? These places haven't been hygiene ever! What makes you think they're going to change their ways?

Especially with Raya coming up. Do we honestly think that there won't be Raya gatherings? Are we delusional to believe that people aren't going to go from house to house to ziarah menziarahi?

Geramnya. I'm just failing to understand the thought process that has gone into the conclusion of a 4th May restart. It's a rash decision that wasn't well thought out made by some people in positions of power who have been so detached from reality that they've failed to see that not everyone has the capability (or common sense) to adhere to the guidelines. What about any form of research and/or legislation to oversee this restart? There needs to be further clarification on how we're going about on this.

Do we have free mass testing? Do we have the technology for contact tracing to take place? Are we South Korea, Japan, China?????

As my friend Olan rightfully pointed out, it just takes *one* person to not know they have the virus to get on a crowded 8am LRT for the whole entire station to be at risk.

Should there be a surge in cases following this 4th May restart, I won't have anyone to point fingers at but the government. I will also laugh at another announcement of a quarantine. I mean, what's another 2 months at home right?

TDLR: Geram, disappointed and angry at the government. Inept, out of touch, and stupid.
Written (technically typed) by Nadia Zainudin at 3:10 PM No comments:

Labels: Feels
Newer Posts Older Posts Home
Subscribe to: Posts (Atom)
Hi!
Just a quick run down; I'm Nadia, 28 from the ever sunny Kuala Lumpur. I've been writing here since I was 14 so this blog has seen me grow from a high school kid to now a working adult and hopefully all the way 'til my older, greying days.
Thanks for dropping by and reading, great to have you here.
xx