I have this habit of writing and then exiting the page, which would push all of my would've-been posts into Drafts.

I'm determined to have this posted TODAY.

Apologies for not writing in so long - I just have been quite busy with work and I risk sounding like a total broken record but I just get too tired once I'm home from work. And weekends... well, weekends I don't do much and I try to take both Saturdays and Sundays completely to myself. Whether it's meeting friends at night or out for shopping trips by myself. I don't check my work email at all (I used to!) during my days off, 'cept for Sunday so that I can do some Monday prep. Like last minute homework kinda thing.

I've just had lunch, I had samyang for noodles. I haven't had that in ages but I've been craving for something spicy and that was the perfect fix. Maybe not that great of an idea seeing how I have sensitive lips and this was my first meal of the day????? But it was so good, I couldn't resist.

My parents and grandparents are out for a wedding and Iman's out working so I'm at liberty to sing an Ariana Grande tune to my heart's desire. So that means loud and way off-tune. Only the best way to sing, really. I've been also incredibly digging Ed Sheeran's new album. Iman and I bought the record and have been playing it non-stop in the car. My favourites are 'Perfect', 'Happier', 'New Man', 'Supermarket Flowers' (SOB!!!!), 'Dive' and of course 'Shape Of You' (which I have concluded as perhaps the best song on the album). 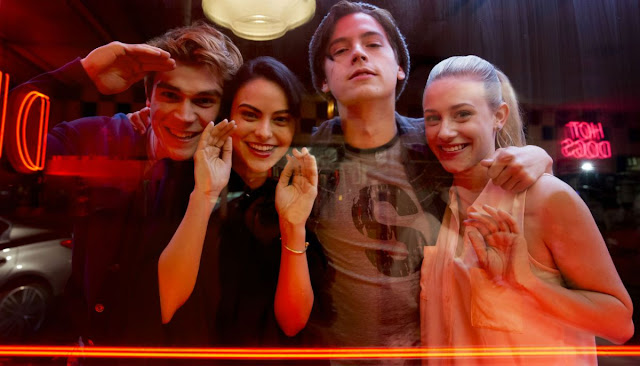 I've also been binge-watching Riverdale! I looooooved reading the Archie comics when I was younger so I was actually looking forward for this new series. Started late 'cause it's now 7 episodes in already and I'm only starting but it's actually kinda good?? It's not as... plasticky as Pretty Little Liars. PLL was a bit Desperate Housewives-ish in terms of its production and filming. Riverdale is a bit more clever with its filming and props and colours. Being a huge fan of the Riverdale gang, I especially love it immensely when I hear references to the comics. Jughead doesn't wear a literal clown, he wears a beanie but cut out to look like a crown with it's original shapes sewn on it. I LOVE IT! When he mentioned Jellybean, I was like !!!!!! Jellybean !!!!! And I also really love the differences the show makes so as to not be a carbon copy of the original. There's diversity in the series which I appreciate. I feel if it was too similar to the original comics, it would've been... predictable and boring.
But go watch it regardless! I haven't tuned in an English speaking show in so long so this was a pleasant surprise. Haha

Update on my Fast Food Free February : Went pretty well though I cheated twice. But it's pretty good I guess seeing how McD is literally a 3 minute drive from my house and the temptation was REAL! I don't think it's all too difficult anyway because when I was in Bristol, I hardly ever ate fast food. Once in like 6 months. So ok lah I guess.

This month is snack free! Which means I can't have snacks in between proper sit-down meals. Breakfast, lunch and dinner and that was IT. This is actually proving to be harder than February's challenge. I tend to be a bit peckish in the evening. I would actually go downstairs of my office to the mart and get myself crisps or an ice-cream. We'll see how it goes. Took me some time to figure out what to cut out this month! My mum's on the same challenge this month. I'm running out of ideas so help me out if you have better ones!

Ok so about 2 weeks ago, I realised my hair was really, really oily. Like the kinda oily that was greasy to the touch. You know that feeling when you have a strand of hair that is clumped together as a result of unwashed conditioner? Like product buildup? YES, that's what I had. But it was frustrating because I would spend ages in the shower trying to wash off all my shampoo and conditioner. I wash my hair with cold water, I would only apply conditioner to the ends of my hair, I would scrub my scalp like crazy. I was doing everything right! It was still the same. To the point that it was really getting to me and I was so unhappy at work because it was so rimas to have severely oily hair that was completely noticeable by anyone and everyone. And now that I have a fringe, it would look really just gross. And the weird part about it all was that the oil and grease was solely concentrated on the left crown of my head.

So I did what every millenial kid would : Google-d the shit outta 'oily patch hair on left crown of head'.

And lo and behold, I was comforted to see that this was apparently quite common and a lot of women have been going on the net seeking for advice on how to get rid of this. Some swore by home remedies like dish detergent, apple cider vinegar, and baking soda. I even watched a Youtube video of how this girl concocted some of the mentioned ingredients and went on a length process to rid her oily patch.

Ever since my whole reindeer-pimple incident (have I not mentioned it on this blog? Basically, I had a bright red pimple right smack on my nose and I googled home remedies and someone mentioned that rubbing garlic all over the affected area was an effective way of ridding the pimple ASAP and since I'm all about that ASAP life, I did just that. It left me with a burning sensation but I thought that was good. LOL I totally woke up with a minor burn on my nose and it was BLACK. My pimple had gone dark but still very much present. Doctor gave me an ointment, but not without completely judging my completely naiive dependence on the Internet for medical advice, and it peeled right off 3rd day in. I had to wear a plaster across my nose to school and looked ridiculous. Ahh, high school), I chose to be smarter about my decisions and NOT succumb to tempting home remedies and decided to grab the good ol' tea tree shampoo. So I did. The next day after work, I rushed to OU and went to the specialised hair care shop (right next to the Balloon Buzz store, same row as Sticky candy store) and this Chinese lady went on and on to say

Which I oddly took so much comfort in. That this was curable and that I was 'banyak muda lagi' hahaha.

Bought a tea tree shampoo and came home and headed straight to the shower. You know those aggressive hair washes at the salon where they shampoo the life out of your hair? Yeah I did that. Because I couldn't take greasy hair no mo'!

IT WORKED! After the first wash, it was so much better though still had some oily strands. Third wash in, and it's back to being fluffy and light. I'm back to loving my hair and the whole world. And that aunty for selling the tea tree shampoo.

Can't believe I went on so long to talk about my hair hahahaha but it was emotionally tough ok!!! I love my hair so it was unsettling for me for the past few weeks. It's done now and I'm haaaappy!! I highly recommend tea-tree shampoo for oily hair - works like a freaking charm!