Sitting on my bed with my smelly sister with me. She brought her speakers because she wanted to let me listen to some of her new finds. She has some pretty great taste. We're going to the movies very soon, like in 45 minutes to watch Bad Genius. I'm kinda excited! It's a Thai movie and it's been getting crazy good reviews so I'm banking in on that. And my mum's following too! It's so rare that my mum leaves the house on weekends because she's so lazy to go out and I understand because she spends so much time at work that the weekend is too precious to be spent being tired.

(I wrote that first paragraph before the movie at about... 3:45pm. Now it's 11:35pm. I watched the movie. It was good. Very good, in fact. I was more blown away by the cinematography and art direction but the plot had my eyes glued to the screen the whole time.)

A week and a bit late but here are some of my current favourites.

Ok. Sorry first and foremost for ever doubting the MRT/LRT. But I take it all back. I love it!!! I love it I love it I love it. I have been wanting to get on the MRT for sometime now but have always been a bit skeptical and no one wanted to follow me on it so I guess I was a bit scared. Which is so weird because I'm so independent in other countries. Give me public transport in South Korea, Budapest, Singapore and I'm so game. But here in my own country and I'm thinking twice???? I hate myself for it but so glad I'm now comfortable getting around with the railway. I hope everyone gets on it more because it's so stress-free I swear!! #jomnaikmrt

Last weekend my friends and I agreed to have lunch at Chillis, KLCC and I was like, "Yes! I'll get on the MRT!" and I did. For the first time ever! I still had to take an Uber to the nearest MRT station though but oh my God, I loveddddd the whole experience! It's huge, it's clean and it's COLD. Like on some days, I'll be freezing in the train. But I was just so impressed. I was really late to the lunch (... like an hour and a half late) so I guess there's that. It's still not as efficient as I'd like but I loved it nevertheless. 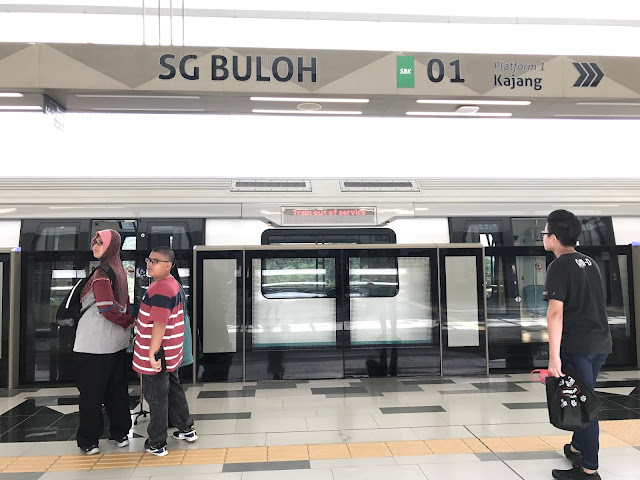 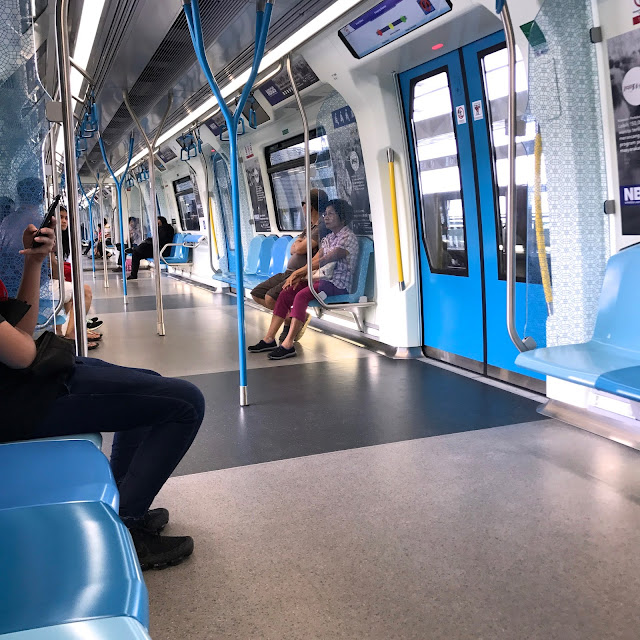 My nearest stop is Sg Buloh so the very end which is great because that means empty carriages. 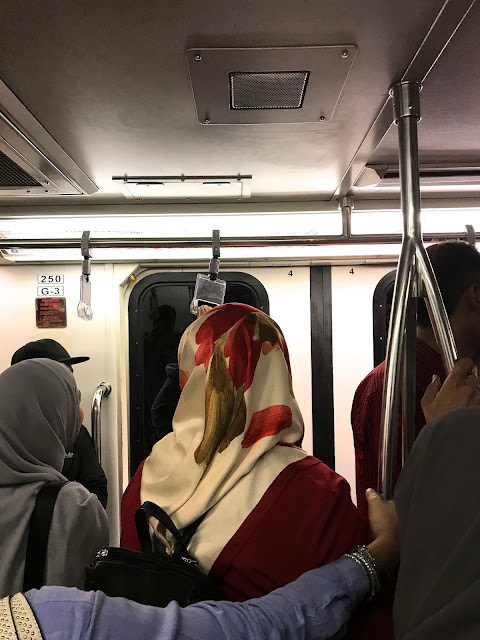 This... however, was quite full. Towards KLCC. 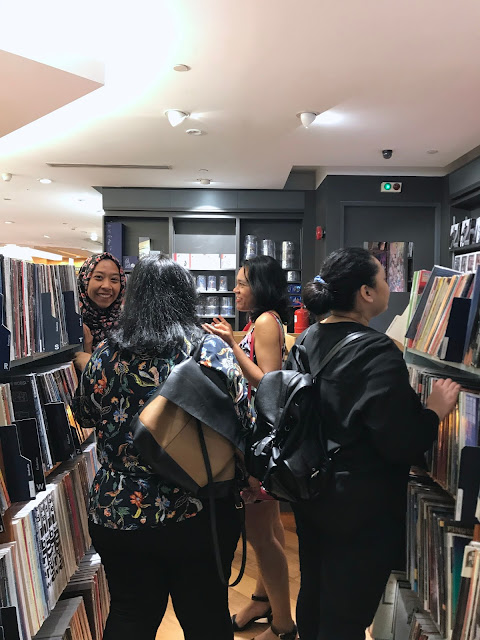 My friends and I spending time at Kinokuniya, just about the best book store ever. 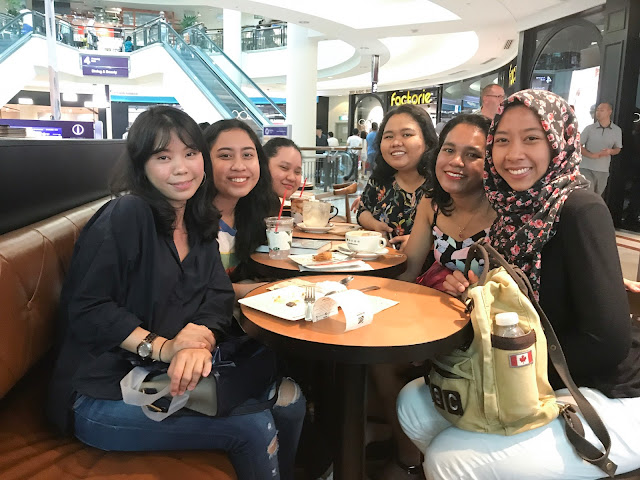 I looooove these girls. They're so girl power all the time, I'm always in *awe*. We're going out this weekend again and I can't wait! 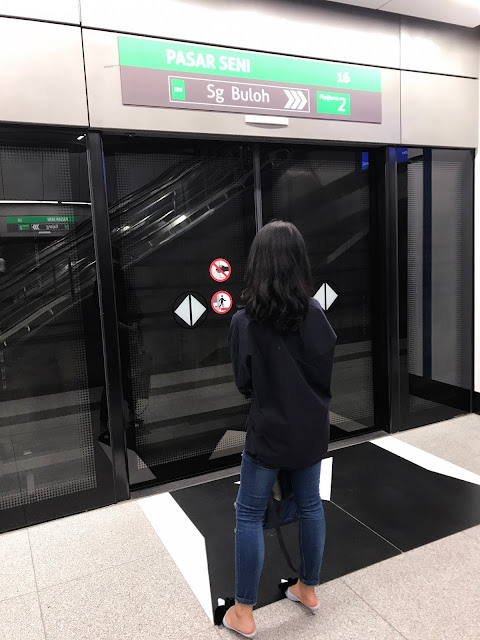 I used to watch mainstream Youtubers but completely stopped because I was just not into their vibe anymore. Everything felt like an advertisement and everyone was vlogging. I'm not that into their personal life so I wasn't interested.

But then I came across a couple of Asian beauty Youtubers and I was back on it. I don't know what about it that I love so much. I think it's because they fit the perfect no-frills Youtube video genre. Minimal editing and soothing voices. I find some Youtubers to be too perky and too cheery that I find them so impossible to connect with. Because I'm not like that at all! So I much, much prefer these Asian Youtubers who are more chilled and laid-back and I love their faces!!! And their make-up!!! Everything about it feels so natural. I'm more of a no-fuss, messy hair kinda girl and these girls are it!!! Long gone are the times of using scotch tape to guide your liner because i) that hurts and ii) who cares.

Here are some of my favourites

I love Christine - from the way she edits her videos to her calming voice. And she's so freaking intricate in her reviews. And honest! I love her. Her voice is so calming and zen and she doesn't have background music and she's got such a lengthy opinion for everything which I really appreciate. That shows passion and honesty for her work and that she doesn't just do it for Youtube.

She's so beautiful!!!! I stumbled onto her Youtube page and from then I followed her on Instagram. She's very new to Youtube and only has 2 videos out but I'm sucha fan of her feed already. I love the Instagram accounts yang tak kisah anything at all and has no rhyme or reason for any photo. The more random the better. And she likes Zion T so that's a plus already for me.

She's Korean and most of her videos are in Korean but she's thoughtful enough to put in subtitles. She currently resides in Australia. I came across her video because she had a Q+A video about being a stewardess which I thought was particularly quite interesting. I've always been curious about being a flight attendant (not that I could ever hold the job because I'm incredibly prone to air sickness and WILL vomit if I don't take a motion sickness pill before I fly) so this kinda answered my queries. But she's also very cool and chill and a bit all over the place but it's quite refreshing to see this from a Korean lass.

So I've been wanting to get myself a Glossier product for so long but have been putting it off because it's quite expensive and pre-orders take such a long time. Something like 3-4 weeks from payment date. Ridiculously long and I'm such a impatient person so I don't think I'd bear to wait that long for a product I've already paid.

But anyway, I got it and I was so excited! It's a tiny, tiny tube. Don't know if I can justify it but you really do need a very small amount for both cheeks. I sincerely, genuinely quite like it because I love the colour. I got the shade Haze which is their darkest shade. It's pretty in-your-face pink and I dig it. I don't put tons of it because trying to subdue it is just another hassle of its own.

It's so easy to blend and I really like how you really don't need much to have some colour on your cheeks. And this is my first time playing around with a liquid blush and it's quite interesting though I think it's a bit more work as opposed to your average powder blushes. But it gives you just the right amount of flush to your cheeks.

ii. NARS' Do Me Baby

Asked my mum to get this shade while she was in London because they don't have it here! It's one of my favourite colours from NARS because it's both very everyday wearable and yet it's not boring. This is my second favourite shade, first being Dolce Vita. The formulation of these lipsticks are the best. They glide so easy and your lips don't feel chapped at all. Out of all the NARS products I have, their lipsticks are my favourite.

So you're saying there's a great foundation that's affordable? *sings praises to the heavens above*

I found out about this winner from my friend, Shera who wore it one day and I was so awed by how smooth her foundation looked. It was like she was professionally made up! So I had to go get it myself. And it's so affordable, less than RM50! Can't say the same for all the other foundations I've used in the past! Only downside to it is that it doesn't have a pump which sucks because you won't know how much to pour out exactly and you're practically wasting product. But it's all good in the hood because it's AFFORDABLE. And it's amazeballs because it matches my shade exactly and it blends so well and it covers up and evens out your skin tone so gr8.

*I'll have photos of these products soon, I just don't have the time to go outside and take decent photos with decent lighting.

So thus ends my post this time! Going to watch Running Man and then sleep. Only Tuesday but already looking forward to the weekend.