Been a hot minute.

I'm trying to manoeuvre typing this whole post because I have steroid cream all over my fingers because of my eczema and I don't want to get my keyboard all sticky. My eczema is getting really bad and I'm so annoyed with it because my fingers are looking so old and wrinkly. I hope it gets better or at least become less itchy!

I'm kinda tired today and it was probably because of my drive to/from my office. The air-conditioner broke and it's not a gas problem, it's a compressor problem. Which is such a pain in the ass because to repair it is so expensive. And I'm crying in the car because of how hot it is. I wind down the window and well, it's not particularly cold outside either. Wind, yes but I have no idea why I'm not getting the breeze in the air kinda wind. It's just hot air and it's just such a frustrating drive. I think I'm getting a headache from being in the car. #drama #over

Can't believe we're already in August!! In about 2-3 weeks time, it'll be a year since I worked with Nelissa. Which is kinda unreal because it really doesn't feel like a year. To think this time last year I was prepping myself for an interview with the ladyboss I see everyday now. Weird.

Last Friday, I went to watch a friend of mine, Nabil, perform at a play called 'Family'. It was in KLPAC and I haven't been to KLPAC before so I didn't know what to expect. But it's pretty damn gorgeous. It's soooo nice and I was so impressed by the whole place. I went there at night so I think it would've been a lot better in the day but it was so, so cool. With exposed bricks, airy hall space and just so much greenery. I loved it!

But I loved the play even more. I CRIED THREE TIMES. No one else cried with me but there were several scenes that I was so completely awed and moved by that I freaking cried. So emotional!! Didn't help that I was on my period.

So this play is very abstract and it doesn't have a plot set in stone nor does it just tell you ONE story. It tells you of many. And it was so relatable. There was this really cool scene with two characters; a father and a son. The father tells the audience of his child's 'achievements' like "He got straight A's for SPM!" "He wants to study engineering like I did!" and then you have the son going, "I got 2 A's for SPM" and "I want to sing and dance!". So the father was telling everyone what he wants from his son (and what he wants to tell the world about his son) and then his son was telling the audience the God honest truth and his dreams and his wishes. I just thought that that scene was so well-played and I nearly teared for that one too. I almost posted (well I did, but I retracted it 2 seconds later because as much as I want to tell the world what I felt but I chickened out because it might feel and seem offensive to adults... my parents in particular) a post about how Asian parents tend to have futures planned out for their kids and it's not always in the kids interest. I feel so passionate about children going with their dreams and I don't think anyone should have a say in it, not even parents. It's because I felt so strongly about that that I particularly connected to that scene.

Anyway, back to the play. It was so perfect - minimal props, no fancy costumes, but with just so much heart and soul poured into every scene. The whole play was immersed in heartfelt stories and perspectives about families. How broken it can be, how different it can be, how every family is just so unique from one another. It was a beautiful telling of everyone's stories and the whole takeaway from the play is the paramount importance of instilling family values and loving each other unconditionally, regardless of the makeup of the family. It was an emotional roller coaster ride - one second I'm crying, the next I'm hitting Ariff because I'm laughing so much (I tend to do that). It was entertaining and I wished it played on for a little longer because I want to recommend it to everyone! It was sold out for all the 4 nights they played at KLPAC and I'm so happy it did! I was so pleasantly surprise to see the amount of people coming to support local theatre. I'll admit - I wouldn't have known of this if not for Nabil but I'm so glad I did. I plan to attend more in the future because if Family was any indicator of how great local theatre can be, count me in.

I also met Dayana!! Which was such a pleasant surprise! Didn't expect to meet anyone other than the friends I went there with. Last we met was in London few years back for dinner (I think?). She was there with her family and I was telling her I was jealous she got front in line and we were all the way in the back but we managed to all sit in the same row haha. But it was so nice to be able to catch up even for like a few minutes. I need to organise tea with her one day (hope you read this and say yes, Dayana!). We don't meet often but because we've been on each other's social media since high school, I feel like I've known her for ages! Dayana is one of the very few friendships I've made on social media that I really am grateful for. Like so inspiring, y'know??? 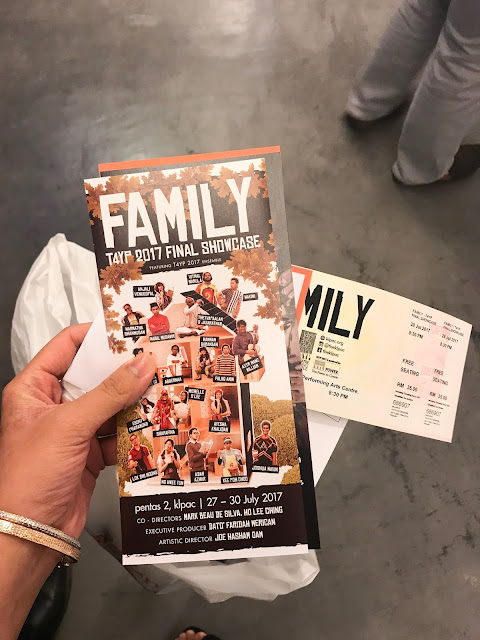 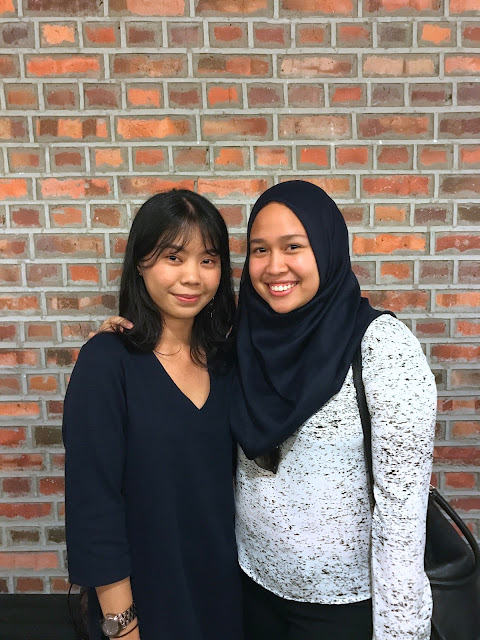 One with Dayana after the show. I look so tired and worn out (or maybe 'cause I cried like, 3 freaking times) but isn't she so photogenic????? She blogs too (click here!) and if you like reading mine then you'll definitely love hers even more! She's so smart, witty and has done a million cool things. And about to do another million cool things. 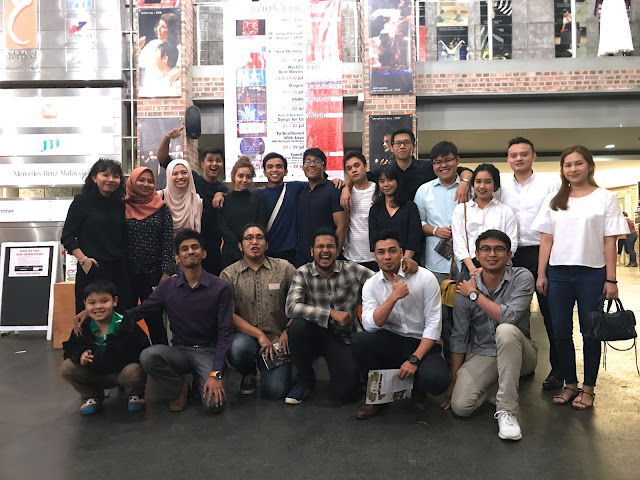 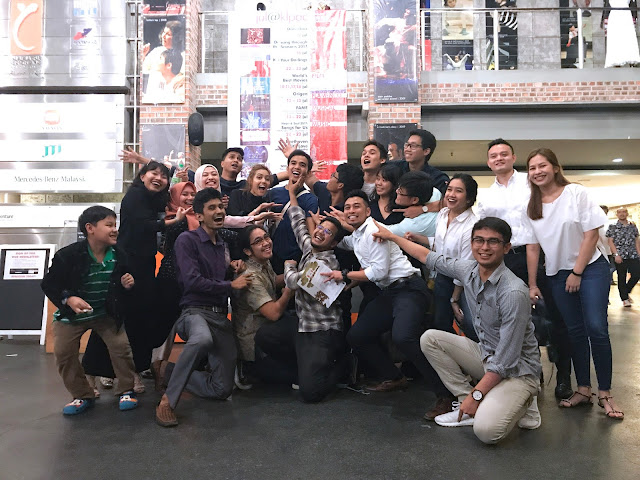 All of us with Mr Superstar! In case you weren't sure which one, he's the one everyone's touching. LOL 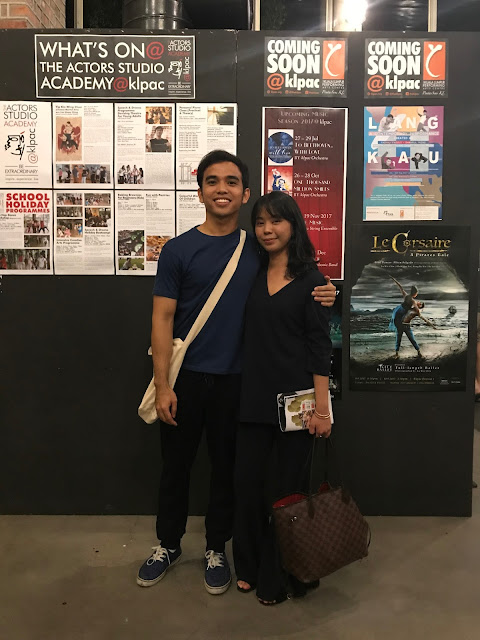 Need to take a photo with people before they get famous. You can say I'm ahead of the game *blows nails 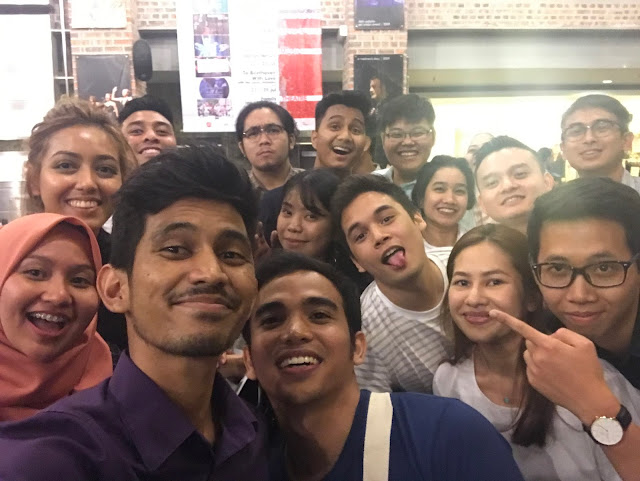 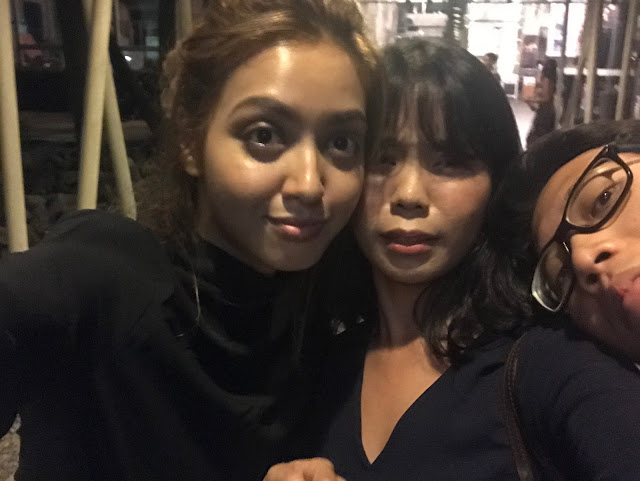 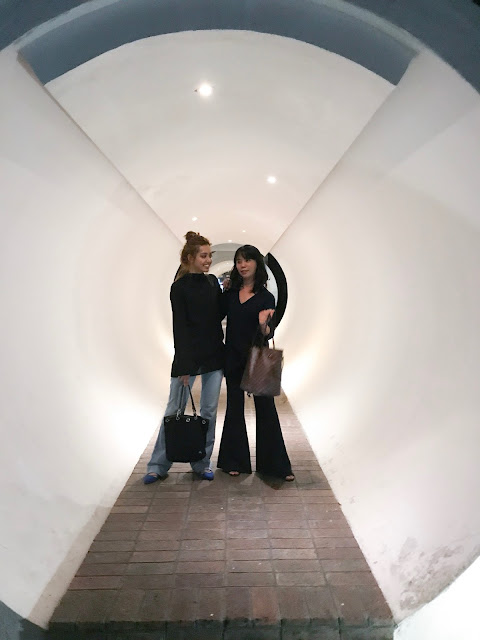 Marissa found this really, really cool walkway and we stopped by to take photos but got shooed by the guard yelling "PRIVATE OFFICE! PRIVATE OFFICE!". Yeah, so...? 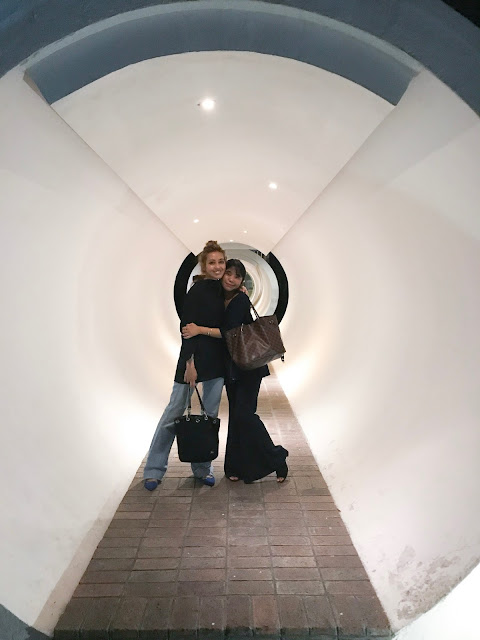 Bestie has gone back to Dublin (and she's already currently in Glasgow and I'm so envious because Kanda's in Glasgow too!!!!) :( :( :( Miss my two babes already. Couldn't spend as much time as I'd like with her when she was back but I'm really glad we did get to meet a few times and to reconnect and be ourselves and just relax and be in our own little world. That one night she sent me home but we hung out in her car for about an hour... infront of my house. Hahaha it did occur to me that we could've just brought the conversation inside but we were so immersed into whatever we were talking about that it didn't matter where we were. 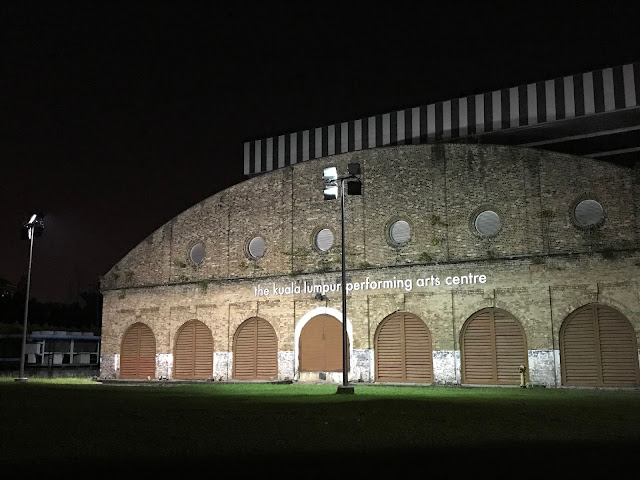 The first thing you see when you drive inside to KLPAC. It's buried pretty deep inside Sentul West but it's so cool lah this place. I don't know how else to describe the place. You see it and you're like, "Duh of course this is made for people of the arts!". I don't even know if that makes sense.

There was a video of Sheila Majid doing quick fire questions on a video for BFM and she was asked what she would do if she were appointed as the minister in charge of music and arts and she replied "I'd stop building shopping malls and build more platforms for the performing arts" or something along those lines. Which I completely and wholeheartedly agree. She then ended her response by saying "The ringgit is already so bad, what's with it with all these shopping malls!". She sounded genuinely so exasperated and fed up which made me love her even more.

Promise to update more! I really want to talk about my favourite k-drama, Fight My Way (which ended weeks ago but I'm still not over it), my favourites of the month, and some photos for Quick Snaps and just some other things I've seen pop up. Need to make a list so I don't forget.

Written (technically typed) by Nadia Zainudin at 12:07 AM