So yesterday evening I was on my secondary Twitter account (dedicated to all things Korean because I kinda didn't want to have my current feed bombarded with like, 300 K-pop accounts) when I came across a tweet that said the lead singer of popular K-Pop group, SHINee was found unconscious in an apartment in Seoul. His name was Jong Hyun.

Now, I love SHINee. Maybe not as much as a proper fan but I mean, I do love them. I still follow them rather regularly and I keep track of their new releases and whatnot. And Tania and I even managed to see them at the SMTown building. That was pretty surreal because it was my first time seeing them up close.

Yesterday, he was found unconscious and was rushed to the hospital and after what seemed to be the longest time, he was pronounced dead. There were news going around that he was responding well to a treatment by the doctors but ultimately he succumbed to his death. He died from carbon monoxide poisoning and it was an apparent case of suicide. And then this wave of uncontrollable sadness just overwhelmed me and I cried. I cried because he must've had so much to deal with on his own, and it must've been so difficult for him to wake up every morning. I know a lot of Asians seem to dismiss mental illness. Apparently very true in his case in his long suicide note where he said his doctors weren't helpful and instead, had rubbished his depression and denounced his own depression on his own personality. I don't know how depression would feel but it must've been so dark for him. Breaks my heart to know that he performs his all for his fans for 9 years only to come back from that feeling so alone and dark.

Before performing for his last concert, he handed his suicide note to a friend who then alerted the family. The family knew about it and was keeping a close eye on him and comforted him just to make sure he was doing fine. You can read the suicide note (in which Jong Hyun himself told the friend to make public whenever he would leave) here (Part 1) and here (Part 2) . It's a long one and I'm still trying to make sense of it but it's heartbreaking. I can't imagine the ones close to him. His mum, sister, friends. Especially the rest of his group members who has spent the later part of their lives together. All 4 members were assigned to be Chief Mourners at his memorial which basically means they were in charge of greeting all the ones who came to pay their respects. It's usually a role assigned to a family member so this speaks volume of how they were as a group.

Mental illness should be discussed more freely and more often. Especially amongst Asians. We seem to not understand the magnitude of it. It's as if it's something we can get over pretty easily. For me, even throwing around the word 'depressed' feels wrong. I've stopped saying it a long time ago because it's such a dangerous adjective to be bouncing off conversations. It belittles the illness.

Just be nice to everyone. Be understanding of everyone and be kind. Always choose to be kind. Everyone faces their own battles, unknown to most. Don't belittle depression, accept and acknowledge it as it is - an illness. Actually, just don't belittle any type of mental illness. Who are we to decide how someone feels.

Wake up everyday and feel grateful that you're not engulfed in darkness and that you don't have demons in your head but be mindful and accommodating to those who do.

We're all that we have. We share this space on earth with so many people. We need to respect and be kind to one another. Don't dismiss it as something that they'll get over easily. Don't dictate how others should feel. I hope this sheds light on the mental illness and suicide rate in Korea and everywhere else. Following this unfortunate incident, I'm trying to educate myself on mental illness and I think everyone should do too. We shouldn't be taking this lightly as we have been in the past. We need to address it and we need to do better where and when we can.

Jong Hyun was a wonderful performer and he was a respected artist in the Korean pop industry. He was funny, entertaining and so sweet to everyone around him. Apt to the name of the group he rose to fame in, he was a star and he will always be. I can't put into words how sad I feel that he had to go through that alone. How hard it must've been for him to end the pain he was going through.

I wish love and light for everyone suffering depression or any form of mental illness and I hope you pull through this, one day at a time. You are worth it and you are wonderful and you deserve a lifetime of great happiness. I'm sorry you don't feel it yet but with lots of prayers and wishes, you will. I pray that the day you see the light at the end of the tunnel, even if it's just a glimpse, comes soon.

Jong Hyun, thank you for making days brighter for those who cared for you. I got into K-pop just as SHINee was about to make a come back for View and I got into it so quick after hearing SHINee's music. You and SHINee played a part in my love for K-pop which is why I've been speechless about this until now. I can't put this into words. 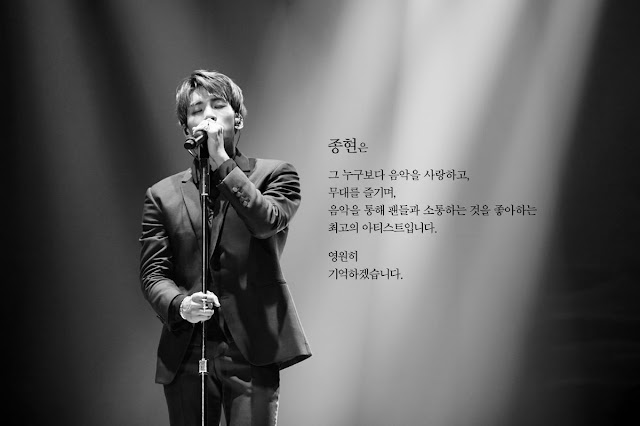 Taken from SMTOWN Global's official twitter. (Translation: Jonghyun, who loved music and enjoyed the stage more than anyone else and who loved communicating with his fans through music. The best artist. We'll remember you forever)

May God bless and may the days to come be full of joy and warmth and ease.