Salam Ramadhan btw everyone! We’re already a week in. Quick for me because I only started fasting 3 days in. It’s wonderful that it’s raining almost everyday, it’s usually scorching hot every Ramadhan so the rain is a nice relief. Albeit it making the workplace just so much more difficult to be in. All I want is a nice snuggle.

Ramadhan is so tiring. Not so much from fasting but from the lack of sleep. It's entirely my fault for sleeping late but my body clock and I can't help it! And then I'm up by 5 for sahur (in this household, it's pretty compulsory to come donwstairs to have something to eat, even if it's just to drink water) and then subuh and then by then I would only have a comfortable hour long to indulge in sleep before getting up for work. I have to admit thought I've been quite bad these past few days, waking up so late! This is where I'm incredibly grateful to be working where I work where we don't really adhere to strict working times (... my boss would love it that we do but we... don't...).

I haven't done one in a long time but I wanna show you what I've been obsessing over the past few weeks/month.

Ok guys. I haven't watched anything in so long that makes me ~insane~. Heart Signal is a Korean reality show with 3 guys and 3 girls, all strangers and they've all been put in a house to live together. All of them single and ready for love basically. And every night they'd have to send a text to the person of the opposite sex that they like and there's a panel of hosts that guess who sends to who. There's a game aspect to it but I'm definitely a lot more interested with the love lines and the cute interactions between the residents than what the panel have to say. I'm like... borderline... unhealthily obsessed with this show. It's on every Friday but English subtitles are only up on the next Wednesday so I have to zone out from my Korean Instagram account (I have a separate one solely for all things Korean so that it doesn't mess with my timelines on my actual one) so that I don't see any spoilers. Not to be dramatic but it's actually consuming my whole life now and I freaking love it. 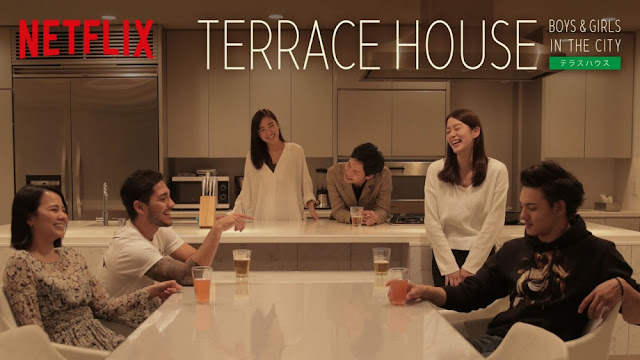 ... so this is just the Japanese version of Heart Signal but slightly different in that they don't text each other anonymously after a day. And residents can leave the house (and the show) whenever they want to. I'm not as taken to this show as I am with Heart Signal but I still quite like it. It's lengthy in the number of episodes (45 compared to Heart Signal's 16) but pretty short per episode (30-40 minutes compared to an hour an half of Heart Signal). But this is the first time I've watched anything Japanese so I was just in awe of the culture, the language and the behaviours. They're SO different from the Koreans and it's endlessly fascinating. Every episode I'm learning something new about them. Like for example, they're just so much more open and liberal compared to their neighbours. Atleast in terms of what they allow to be aired on TV. And even their interactions are just a lot more stronger than the Koreans, if they like someone, they'll say it and they'll aim for a kiss then and there. It's so odd but so refreshing. Culture shock hahaha. It's like anything and everything goes.

I've only watched the second season (Boys & Girls in the City) and I watched one episode of the latest season but wasn't too into it so I stopped. It's such a popular show so I guess if you're interested, you can give it a try? It's not as trashy as I make it up to be, promise! It's really low key drama, it's insane how such a show can be so addictive.

My holy grail. I didn't realise just how good this is 'til I stopped using it. I have very sensitive, acne-prone, oily skin and this just reduces excess oil production and increases strength of your skin barrier. Redness, blotchiness, pimples and zits have all subsided. It's anti-inflammatory, anti-bacterial and it really helps with the size of my pores too. I just love the living lights out of this product, it's made me such a niacinamide fan. The ingredient works for my skin and I know this for an absolute fact because when I stopped using it for a while (because they're so hard to get hold of), my face just went berserk. 10/10 recommend.

I got this on a whim during the Sephora Sale and I say 'on a whim' only because I researched about the product just the night before and usually it takes me weeks to decide whether I want to get something or not especially if it's a bit pricey. But so far, I love it!

I don't know if it's just my skin calming down from the other products I've been using or if this has contributed to that but I'd like to think it has. Centella asiatica is the main ingredient in this and it's been called as the powerhouse skincare ingredient to soothe inflammation, blemishes and redness. It's also known as 'tiger grass' because this is the same herb/plant that the Asian tigers roll around in to soothe their wounds. Cool right??? Totally the deal breaker for me.

The other products from this same line actually is green in colour but blends into your skin colours to combat the redness in your skin. I'll try that next!

Ok someone help, I cannot stop listening to her music!!

I only just discovered her a few weeks ago and there's been no turning back because I seriously just don't listen to anything else. she's so good and her music is so soothing. It's been raining quite a lot the past week or so and her music feels like it's one with the rain and the gloom. I just zone out when I listen to her which isn't conducive in the workplace but otherwise, really really good. My kind of music - something I can put on and doze off to... but in a good way.

My favourites are Too Much Too Late, Stand Still, Frozen and Confidently Lost.
__

We're less than 3 weeks til my favourite time of year; Raya! So excited to be spending my holidays in Penang with my family. Not too sure what I'll be wearing but with everyone selling everything everywhere, it shouldn't be too difficult.