My First Dose of Vaccine!

Here's one for the books! I got vaccinated yesterday!

So when KJ announced that there was going to be a first come first serve vaccination program for the AstraZeneca vaccine, my friends and I were ever ready to sign up. It was at 12pm on May 2nd 2021, a Sunday. So naturally, I overslept. I woke up 12:15 to lots of messages in the various friend groupchats I have about how they didn't manage to get it or they couldn't click on the link. At that point I gave up without even trying. I mean... I missed the 12pm opening and I assumed the slots would have been taken up quick. But my friends told me to just give it a shot (haha) and I somehow managed to book a slot! I made sure to make it on a Saturday because if I had any side effects, the Sunday could cushion me before going to work.

Here's how it went!

1. I'm lucky that Zaim booked the same slot as I did. Same day, same time, same location. So I had a teman. He picked me up and off we went to WTC. Our appointment was at 9:30 and we drove there so we had to find parking. Good thing it wasn't too bad to find a spot. But any later than that, susah sikit to find parking methinks. My best bet is that you have someone send you. Or Grab your way there. We were there in the basement parking, lining up at about 9:18am. Macam lambat sikit lah. 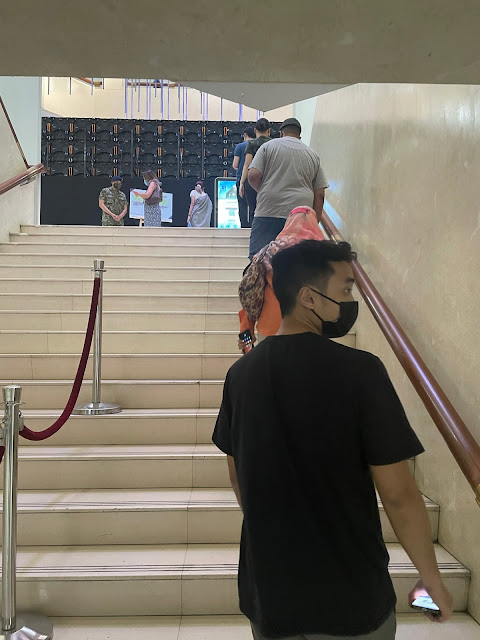 2. But since we parked, we entered from the basement. I've seen how you would enter if someone dropped you off so I'm not sure how that works. Upon entering, you have to scan QR, take your temp and show your appointment to the guard there.

QUEUE AT YOUR STATION 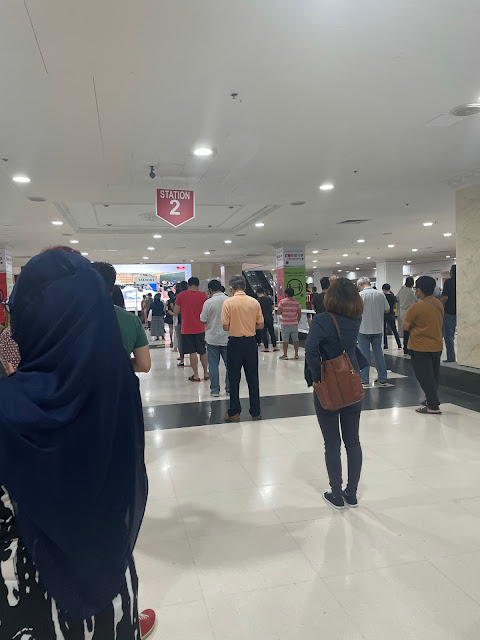 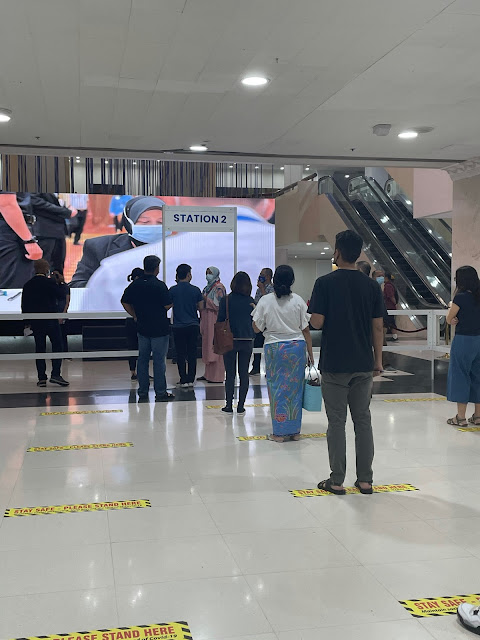 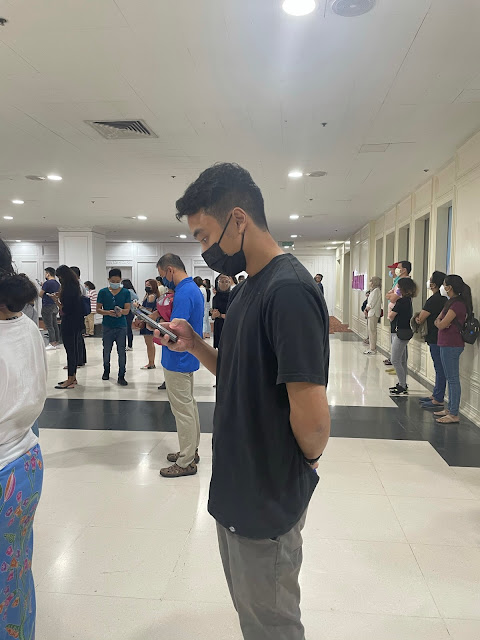 3. Then you line up at your station. So important that you know what station you've been assigned to. It'll guide you all the way 'til the end. Both Zaim and I were Station 2 so we lined up at the designated area.

4. Wait 'til they call you in. Tip: Really no point you go any earlier than your time. Because you won't even be allowed to come in to the waiting area (at point 3). You'll have to wait outside. Save yourself the trouble and come maybe half an hour je before your appointment. 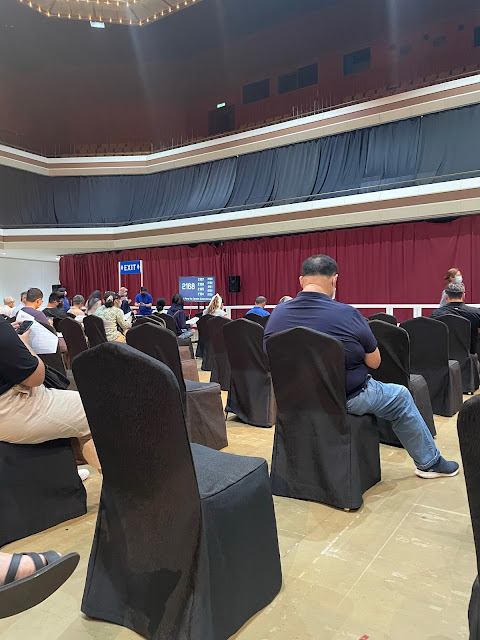 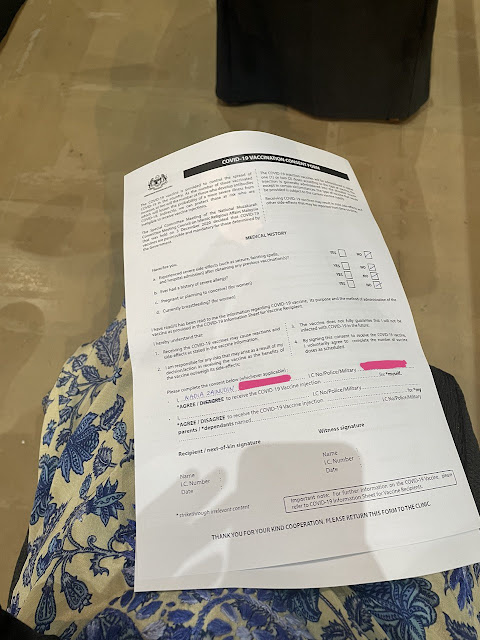 5. Go up to the holding room. It's 2 floors up. You'll have to scan another time and take your temp again. Find your station, wait for them to give you your forms (2 of the same kind, you fill up both) and three tickets of your angka giliran (what is this in English??). Fill it up but DON'T SIGN IT. You'll only have to sign when you meet the doctor later for your consultation.

My experience here was that after Zaim's number was called, I was about 17 numbers later than him but the monitor/screen was stuck so the lady had to manually call out our numbers. It's relatively quite fast though!

Important note: Bring your own pen. I didn't. But again, I was lucky that Zaim did so I borrowed his je huhu 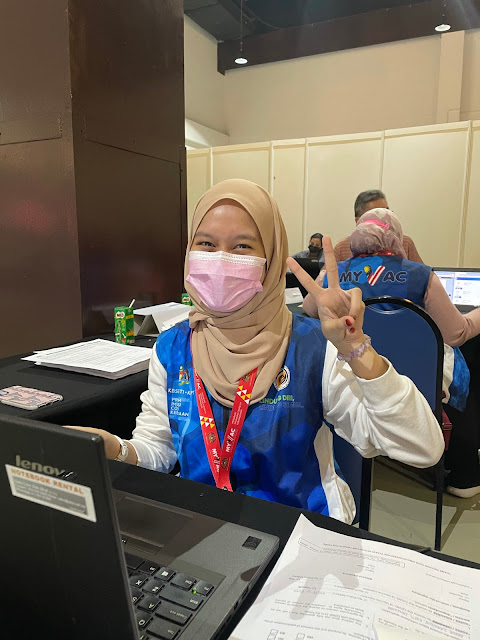 6. After your number gets called, you walk into another room where you wait to be registered. My cute experience was when I sat down for the girl to register me, she looked up and asked "Anak Cikgu Mazliza ya?" haha I swear I get recognised more for being my mum's daughter than anything else. She graduated in 2015 and told me how close she was with my mum. So I took a photo of her and sent it over to Mama. Haha so sweet of her to say hi!

I *think* you have to scan another time here but the person there will let you know how to go on about it. Once she's registered you, you'll be directed to your doctor for the consultation.

7. My doctor was a young girl, only 25! I know this because she also had to sign my form along with her IC. And she was very helpful. She gave a brief on the vaccine and side effects. I just told her I had eczema and that was my only concern. She also has eczema so she said all's fine and the vaccine shouldn't effect that at all. She then signed my form and told me I could go into the next room.

8. There were seats in the next room but no one was there! So one of the volunteers just brought me into a room. IT WAS VACCINE SHOT TIMEEEE! Tbh I wasn't prepared for this. I thought it'd be a bit of a wait. Macam tak sempat to prepare myself.

I filmed myself taking the shot. I'm not going to lie, it was PAINFUL! All my friends who had gone before me said it was painless and that they "didn't even feel the needle". What bull!! I could totally feel the needle in! At first, it was just the general pain of an injection but it was in there for some time, babes. Longer than I'd like lah ya. Painful to the point of me going "Wow, that was quite painful!" to the doctor hahaha. He said "hahaha ok done done". Ya, you'd better be done!!! He then covered it with wool and tape but I saw some people getting a plaster. Not that that's important but yknow.

DON'T FORGET TO SCAN THE BARCODE!!! 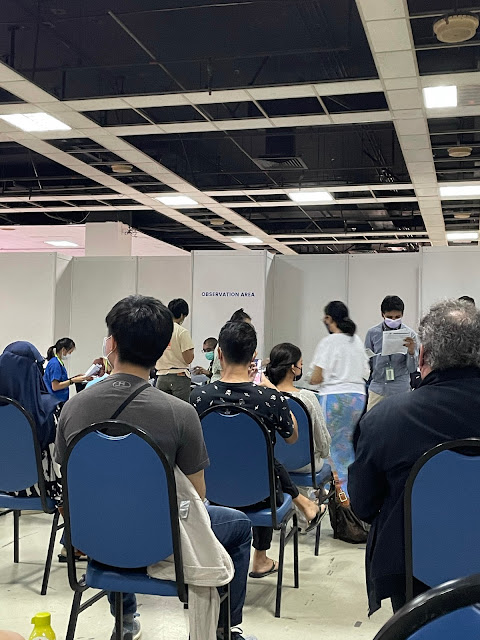 9. You're then directed to the observation room downstairs. Again, you follow your station number. Gave my forms to the lady and you sit down for 15 mins to see if you have any immediate reaction. Once done, they'll call you and you have to sit at another section where they tell you to click on a link on your app to record your symptoms.

10. Here's where the delay for us started. The link was completely unclickable. So we had to wait... and wait. Some people managed and left immediately. But because ours wasn't working, we had to wait for the lady to call us one by one to manually enable the link for us. Part ni kecoh sikit because everyone was so unorganised. This was an unforeseen situation so no one expected it. But I think it worked out not long after because friends who went after didn't complain of such delay anymore.

11. Once you click on the link and see the "Do you have any symptoms?" to which you click either "Yes" or "No", you're free to leave! 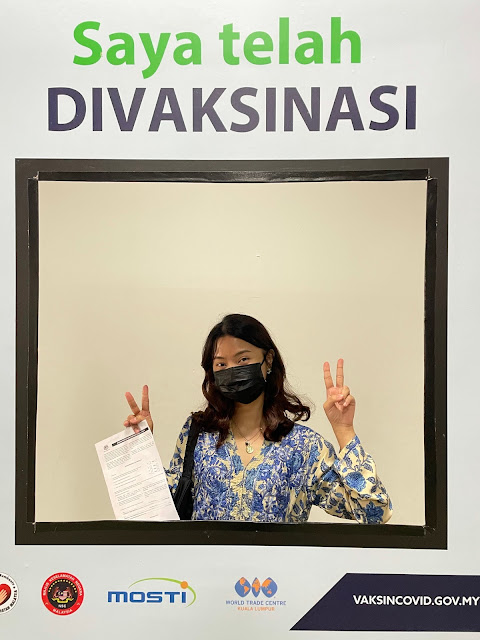 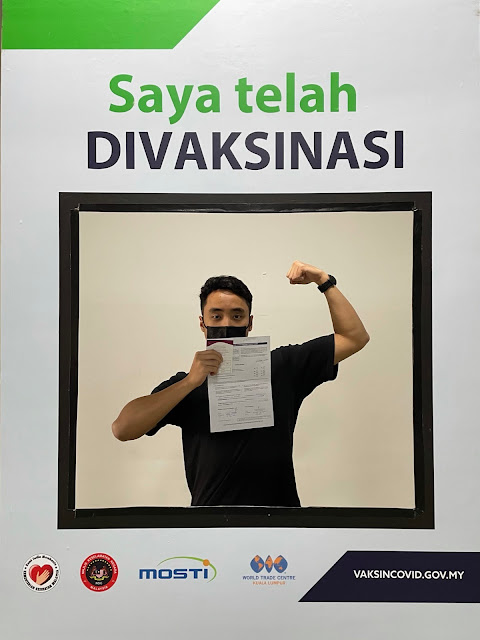 12. We took the compulsory souvenir photo haha. Again, good thing I had Zaim with me so it was easy to have him take my photo. But we did take a photo for someone who went alone. #KitaJagaKita and all that.

So there's that! Overall, the process was smooth sailing and quick 'cept for the last bit. People were so nice and helpful. Made for a pleasant experience! Though it took about 2 hours, it didn't actually *feel* long. If I didn't face the two technical difficulties, it could have cut it an hour short, I'm sure. I haven't heard anyone complain about the process yet other than a bit of the waiting outside if you're there early. Other than that, it was all good! Props to the organisers.

Alhamdulillah it's coming close to 36 hours and I'm feeling fine. No major side effects. I know people had fevers and headaches but I don't have anything so far. Except for the sore arm. SO sore that I can't have any pressure on it or move my left arm around too much. My sleep last night was bit annoying cause I'm so used to sleeping on my left side that it was so awkward to sleep on my right instead. But it's such a small thing to be bothered about that I'm thankful nevertheless. Who knows?? I could develop a fever later in the night but let's not wish for that amin amin aminnn.

Hope everyone gets the vaccine! It's a step closer to just ending this pandemic. With cases on the rise these days, it's so scary to think that it's already so seeped in our communities that we really can't and won't know who has it anymore. You could be doing all fine and dandy but could be positive. It's the death rate that has been worrying. Sigh. Hope everyone's keeping safe. May Allah protect us all from this pandemic.

Please also say a prayer for our brothers and sisters in Palestine who have been going through an immeasurable level of tragedy, trauma and horror pain. May Allah bestow peace and justice to the oppressed and fallen Palestinians. May families who were torn apart be granted and reunited in Jannah. The power of prayer and recently, the power of social media! The more we talk about it, the better it is for them who have no means to do so. May we all be protected, Ya Allah.

Take care, everyone. Hope the above has helped a bit in preparing for your vaccination. InsyaAllah all will go well! The faster we get this done, the faster you can travel again!!! Remember hanging out without wearing masks???? Dream.