I haven't blogged in a bit because I really had no idea on what I wanted to write about.

I just got off from an hour an a half call with Zaim over Snapchat (yes! it's a thing now!) and I finally figured what I wanted to write about.

I love my siblings. I might not vocalise it as much as I'd like but I really do. I think because I'm the eldest, I seem to be more maternal towards them. They're not that much younger actually, Zaim is a only a year younger than I am, Tania three years and Iman six years. So it's not like I have a small baby sister (although I do refer to Iman as that, much to her annoyance) or brother that I have to baby talk and bermanja with. But maybe it's because they're not that much younger that I've become such good friends with them. Sister first, friend second. I always feel the need to take care of them all the time. I swear I'm more worrisome of Iman's whereabouts than my own mum sometimes!! Humour is also another thing. The three of them always makes me laugh in their own ways. Zaim and Iman is witty and very quick with their humour where else Tania's humour is a bit more random and a bit more makcik and very kecoh. I communicate with Tania a lot more kasar than I am with the other two so naturally, our jokes are a lot more rude hahaha and we call each other mean names on a daily basis. It's totes norms.

Like I said, I just got off a video call with my brother and 2 days back I was FaceTiming with Tania for ages and not too long before that with Iman. Needless to say, it's always hours of really random and fun conversations.

With Zaim, as the only boy, he was a nightmare when he was a kid. He used to be so buas and kasar as a kid and just overall annoying! But I always say this to my mum,

which always makes her laugh. It's true. My parents and grandparents would testify any day anytime to you about how crazy Zaim was. He just wouldn't stand still. True fact: Zaim has gone to the hospital as a child more times for his injuries than Tania, Iman and I put together.

He's grown to be a very charming boy, he's always had his ways with the adults. He knows how to make them laugh. Especially with my grandparents. They always find him so amusing and it's definitely a charm that one is born with. He makes the rest of the family laugh also. My mum and I are pretty easily amused by the three's antics but it always starts with Zaim. My younger cousins all love him because he's always cracking them up from sometimes doing and saying absolutely nothing!! 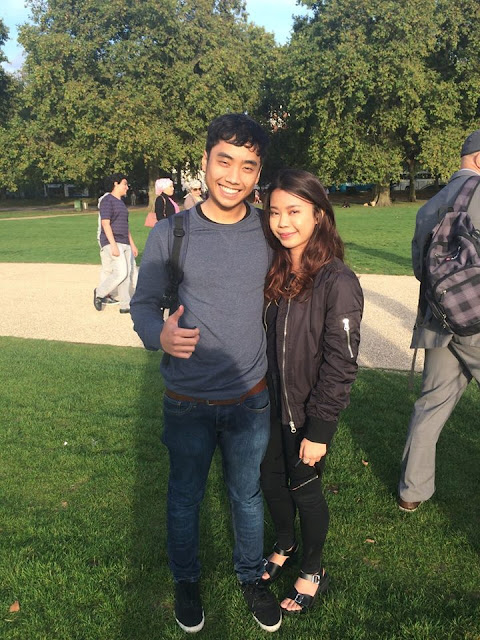 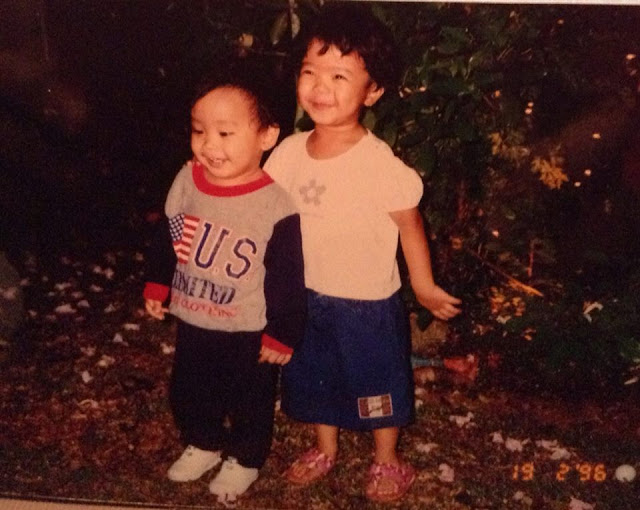 There was a time when I used to be tallest in the family...

Zaim is also a very smart kid. He's always been like that. He used to always, constantly, non-stop ask "Why?" to every damn thing on earth that one point, my aunty bought him an encyclopaedia as a birthday gift with a note inside, "To answer all your 'Why?''s". To that extent, guys!!!!! But he's a smart kid because he always has to understand the root of it. Like he cannot get over it if he doesn't understand the root cause of something. I, on the other hand, can get away with a simple explanation but Zaim has to understand from square 1. That curiosity is actually very admirable; shows persistence and determination. But annoying lah, nevertheless.

But as I was talking to him just now, I realised that he's grown to be a very ambitious person and he has a lot to say and a lot more that he wants to accomplish in life. For a 22 year old boy, his determination to do this and do that is very inspiring to say the least. I'm proud as a sister to see this. I feel he has a lot to offer to the world so I pray that he does materialise all that. I pray that he finds his way to success and be just as great as I know he can potentially be.

Tania is basically my best friend. She's always been. Our birthdays are two days apart. It might be from all the time we've spent together (roomies for ages) but we're on the exact wavelength as each other. What I think is what she thinks, what she wants is what I want. I tolerate her and she tolerates me. Her ideas are mine and mine are hers. It's just very natural of a friendship. We just grew to think completely alike. Might be from all the time we spent together as kids.

I fight and argue with Tania more than I have with Zaim and Iman. We've called each other mean names (we still do) and she's kicked me in the teeth once (or more than that, I won't remember) and pulled each other's hair but the longest we'll go fighting is a day tops. I find a million faults with her and she finds a billion in me. But she's also the person I look to when I need a pick-me-up or when I need someone to talk some sense into me. She's a feisty young girl and sometimes nak sepak but sometimes also quite inspiring. She's done ton loads more than I have and she's just overall a more independent person than I am. She's a go-getter and to see that in a young girl anywhere just really motivates you, y'know? 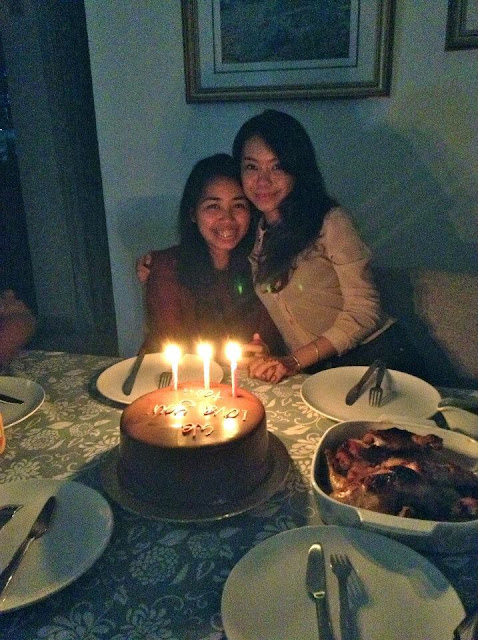 I always say that if I ever want to start a business in the future, the only person I'd ever want to do it with is Tania. Because I need someone who I'll be comfortable with at all times. That's Tania to me. She's comfortable, be it to gossip with or to tell her off sternly. I'm not scared of the outcome if I ever do have to scold her or if she tells me off because our relationship as sisters is pretty much rock solid STEEL. Love the girl. I hope for many great things in my future and above all, I hope it's with my sister by my side.

And then we have the baby of the family! Iman! She's six years younger than I am but is she really??? She's been friendly with boys since like idk primary school???? I only had the guts to talk to boys when I was 14!!!!! She's a pretty bad ass girl and she's so easy going and cool. She's also incredibly funny. She takes on a lot of Zaim in how she talks and behaves. I was talking to Zaim just now and I'm always always reminded of Iman! They look so much alike also! I never understood why and how people would say that us siblings look alike (or how I look so much like my mum; I don't see it still!) but I finally get it now!! Zaim and Iman are muka so sebijik kinda thing. Iman is not like Tania and I; she hates anything too girly. When she was younger, my mum literally had to PAY her money LIKE ACTUAL PHYSICAL CASH for her to get in a party dress.

That should tell you how much we're different. We suspect it's because before she was born, my dad wished his fourth child would be a boy so it'll be a nice even balance with 2 girls 2 boys in the family. But alas. Iman comes along. Even the name Iman is ambiguous as you can already tell. So yeah we got a girl but she's as tough and rough as they come. 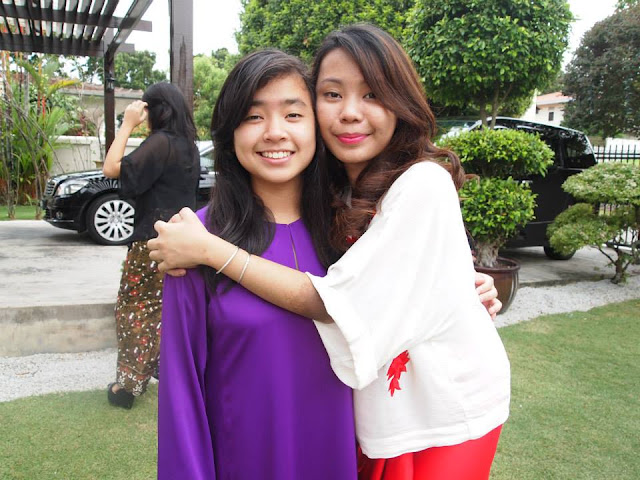 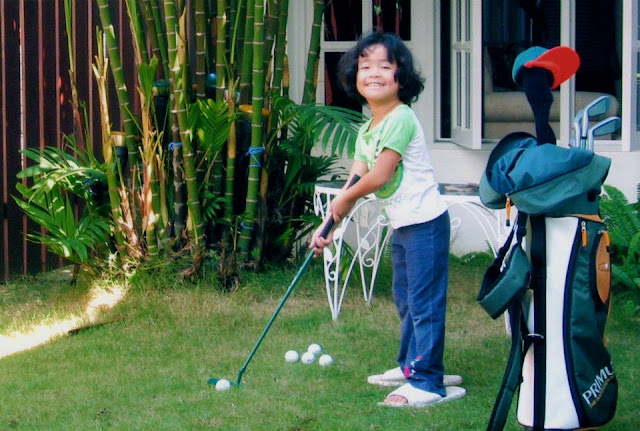 Look at how stinkin' cute this girl was / is / will forever be.

But she's a doll. She even used to look like one, with curly ringlets and rosy cheeks. Now she's tanned. Like constantly tanned. From all the sports that she actively involves herself in. I keep telling her to slather on more sunscreen because 110% positive she's being exposed to an unhealthy amount of sun. And all too voluntarily....

But really, she's a doll. I love her. She's the only sibling who I can just curl up to on her bed and hug the living the lights out of. Also helps that she's quite bulat hahahaha but so cute lah the girl. Since she's the youngest, my maternal instincts towards protecting her is kicked up two gears. I'm a lot more worried about her and she's already 17 but a part of me will always see her as 7. It's comforting to know that she has a lot of guy friends around her, at least that way I know she's always in good and safe company.

I love my siblings. I've got such a great relationship with all of them and I'm very thankful for that. Not many people do, so to think that I'm on great terms with all three of them makes me really blessed. I always made sure, growing up, that I wouldn't portray myself as the sister that they had to hide things from. I wanted to be the sister that they can talk to any day any time and about anything. Anything under the sun.

I always pray that all four of us grow to be only the best possible version of ourselves so that we can be contributive to society in the future and to be our parents pride and joy. We already are, I'm sure kehkeh but I hope that we can always constantly give them more and more reasons to be proud. I'm sure we're all capable of doing great things in life but regardless, I'm always praying that God gives us bright futures ahead of us. As the eldest sister, I'm always looking out for these kiddos and I only want them to be happy all the time. If this is how I feel for them as a sister, I'd probably be 100x more emotional as a mum.

And lastly, what is a siblings appreciation blog post if not with a few photos. All conveniently from my mum's Facebook hahaha 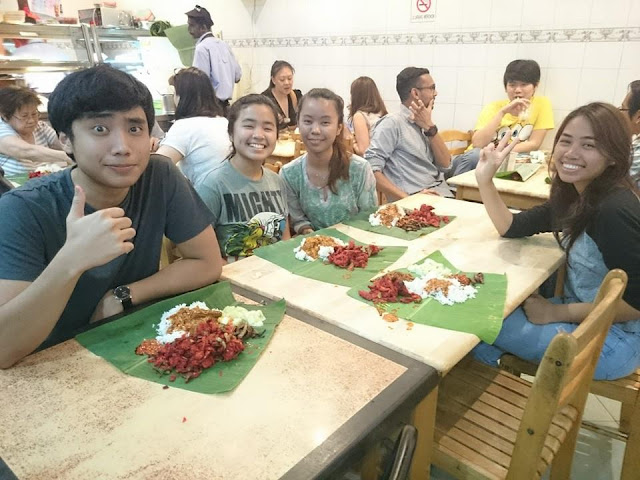 Contemplating whether I miss my siblings more or nasi daun pisang more hmmm... 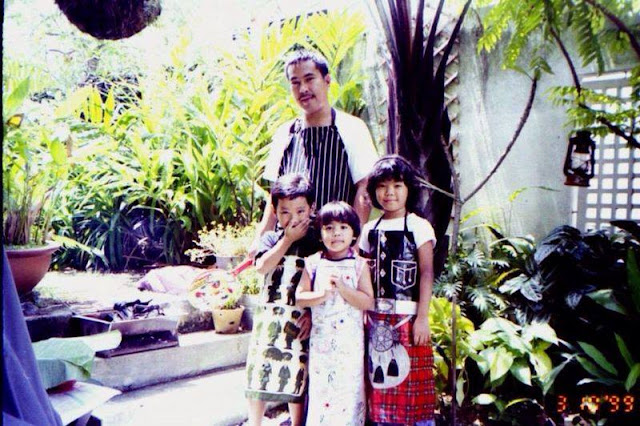 This was taken in 1999 which was the year Iman was born which would explain why she's not in the photo. How cute were these aprons that-we-never-ever-used-ever-after-this-barbecue-lunch though.. 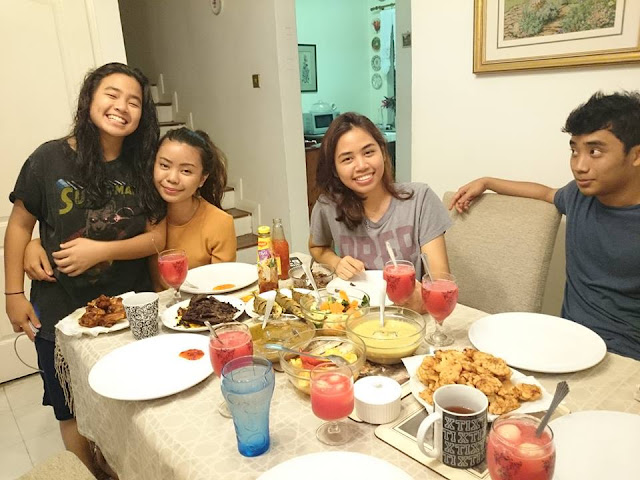 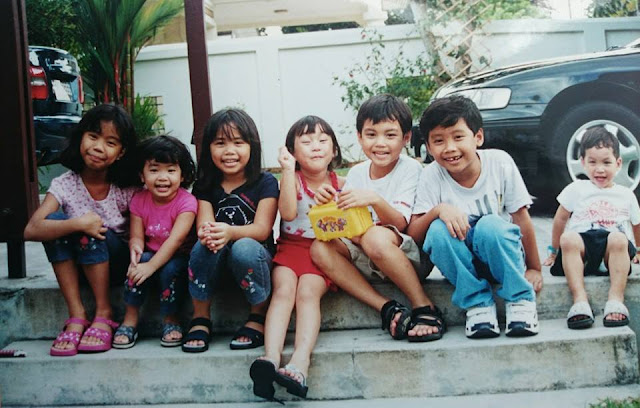 The days where Iman, Tania and I would willingly wear the same identical tights. 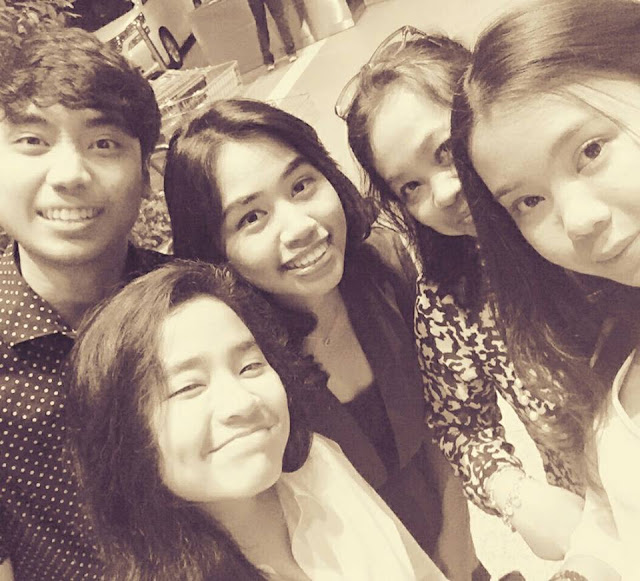 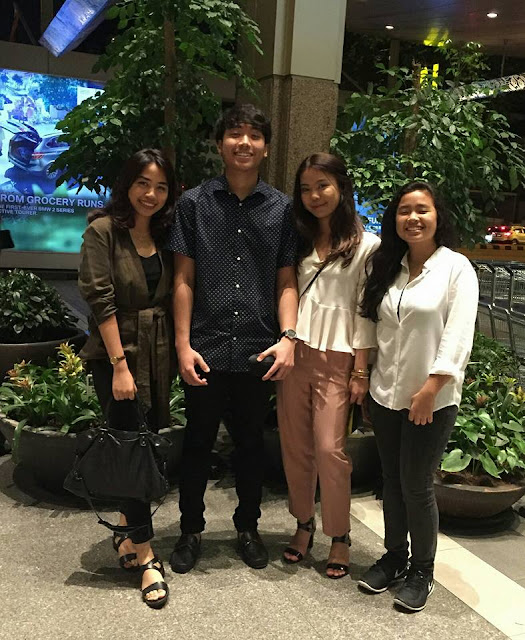 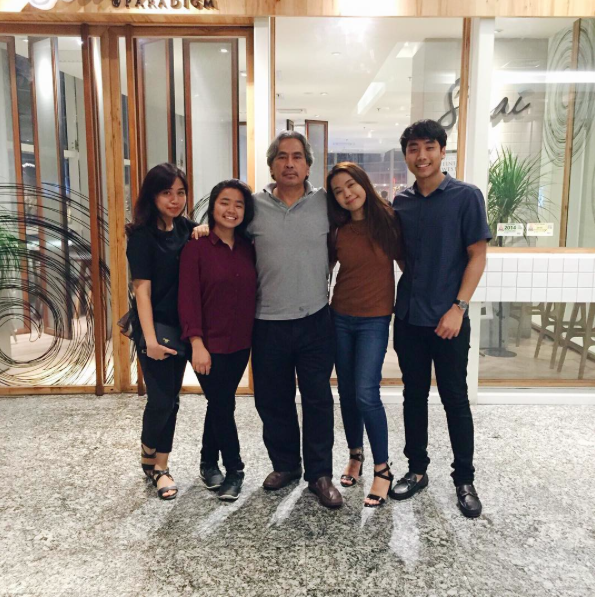 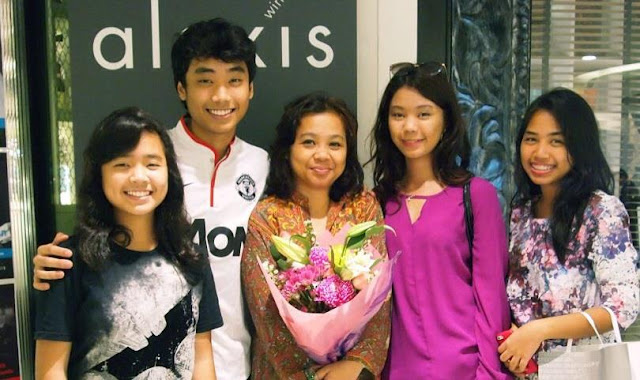 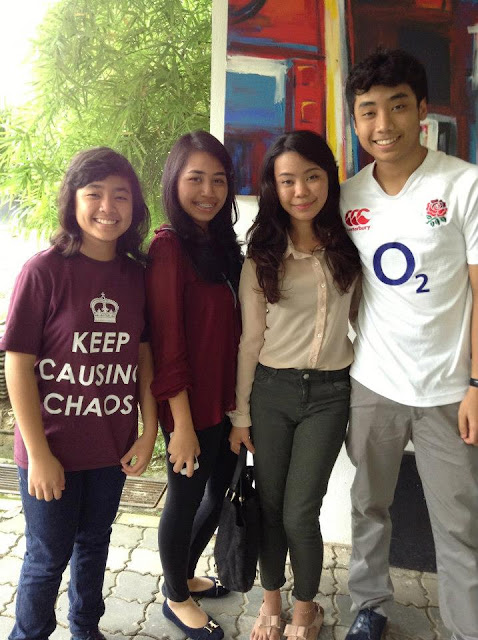 I'm pretty pleased with the sister I've grown to become but also perhaps more importantly I'm pretty damn pleased that I have phenomenal siblings that made being a sister so much fun and rewarding to begin with.