Today, I had my first experience with...

So I've heard about this going around KL and to be honest, I wasn't too crazy about it because I've worn false lashes 4 times ever and all 4 times I wasn't too ecstatic about 'em. They felt heavy and it was just not the most comfortable thing in the world for me.

But then after meeting Marissa the other day, she had suchhhhh nice and lush lashes that I asked her
"What mascara are you using cause my poor lashes and I need it"
and she said there was no mascara involved, only some help of these lash extensions. Hmmm....
~ i n t e r e s t i n g ~

So when Sarah said she wanted to do and asked if I was up for it, I said ok yes let's do this!!! I was a bit skeptical at first but I mean, if you've not tried it, you won't know right? Right.

We went to Lash Lab in Bangsar. It's on the same row in Telawi as KGB. I just have to rave to you about the place and the service. I LOOOVE IT. The place looks so comfortable and serene. It looks so well made and well maintained. I love places like these, makes me want to go again and again (which is probably the whole point). I assume the owner was the lady manning the counter and she was the only one who wasn't in uniform. Her name is Nina. She was so accommodating!! Right after I was done with my session, she, knowing that this was my first ever time, came up to me and asked how the experience felt like and just kinda gave me tips here and there on the maintenance of these lashes. 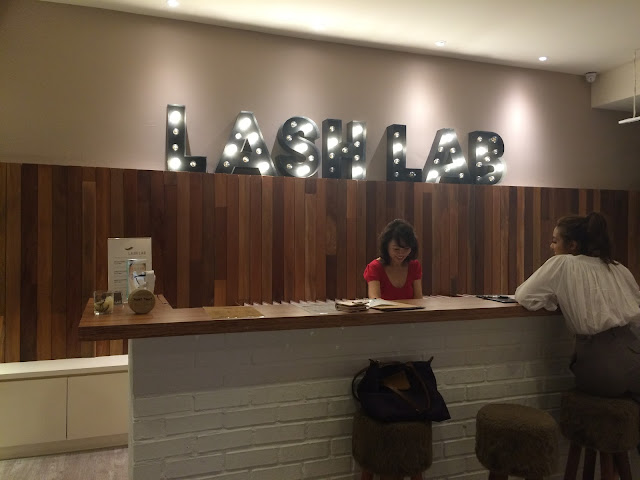 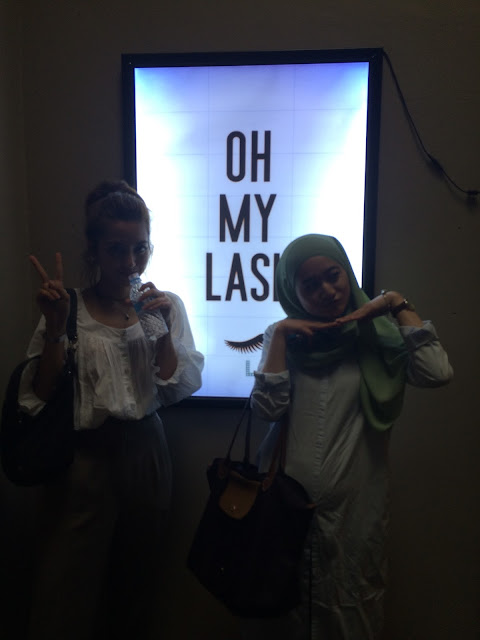 I know this sounds basic customer service but she was just extra sweet and friendly and made the whole experience that much better. A lot of workers and owners of establishments in Malaysia don't understand (therefore don't show) that the extra mile they go for customer service often pays them back 10x. It's such a shame to see so often how shop assistants have ridiculously poor customer service! Puts me off all the time. So I was very very happy that the ladies at Lash Lab were so nice to Sarah, Marissa and I. Amir was also there and whilst we were doing our lashes, Nina even went up to him to berborak. Hahaha

So upon arriving, we had to fill in our basic information and tick some terms and conditions before moving on to the 'consulting' bit. We were assigned to an assistant each and they asked us on how we wanted our lashes to look like. Sarah and I were a bit nervous so we opted for natural looking ones. How natural is natural when it comes to lash extensions right? Right, I got you. So as much as I wanted natural ones, I also didn't want to have spent 2 hours and RM168 to look like I had a coat of mascara when I could just do that at home. So Miko (my assistant) lead me to the private room (I was lucky that I got in the room, Marissa and Sarah were in the more common area where there were about 6 beds?) and upon looking at my lashes, she asked if I wanted anything more voluminous and I just basically told her to do whatever felt right and nice. For your information, I got the Korean ones (also the cheapest among the three available) and I think my curl was a 0.2? Sarah's was 0.15. And mine's the C. Marissa got the D so it looks fuller than mine and Sarah's. You'll understand this when you try it out yourself haha

It felt kinda like going into surgery? Not that I would know what surgery feels like but we had a bright fluorescent light right above us and they would tape your under eyes and your lids. For cleaning up purposes I would assume? I don't really know. And it took about an hour and a half or an hour 45 mins? Somewhere around there. You close your eyes the entire time! Well geez thanks Captain Obvious hahah but it's harder than you think ok?? Since you're not sleeping, closing your eyes for that long felt forced and unnatural. Until about 30 minutes in I felt a bit sleepy and I kinda got used to it. Probably the most still I've been hahaha so much so that I actually got fidgety in the last 20 minutes of my session because it was as if my body had an itch to move. I had my earphones plugged in so it didn't really feel all too long. It was very therapeutic actually.

And after we were done, we went to pay and that was when Nina gathered us around the counter and told us of more Dos and Don'ts. Here are some of what she said :

1. Don't have your lashes be in contact with water for the next 48 hours. Find a way to wash your face and shower without getting around your eye region. (She suggested goggles jokingly although I think she meant it seriously)

2. Don't use an oil cleanser around the eye area. The glue that holds your lashes in place will come undone.

3. Don't curl your lashes, don't use a mascara, basically don't use anything on your lashes. They're made to look like you spent ages on it so you don't actually have to.

5. Don't be vigorous with them. Marissa rubbed her eyes unknowingly when she woke up the next morning hahaha

As to how they feel on, they feel pretty comfy! Definitely does not have the weight as having false lashes on and they feel a lot more natural. Marissa said hers (she chose for a thicker, fuller option) felt slightly heavy but mine just feels like nothing. Although I will say my line of vision FEELS like I have more than a coat of mascara on. It's not obstructing my view at all but you can see the wispiness of the lashes lah.

Also, if you were to do these extensions, you can bid adieu to eyeliner. You don't have to wear it anyway because these lashes look pretty thick at its stem (?) so it already looks like you're wearing liner. Perhaps not the best idea also to wear eyeliner because removing them, I'd imagine, would be quite difficult as they are so close to the lashes. I asked them to apply longer ones at my outer corner so it looks like I have a liner on already.

All in all, I enjoyed the whole experience and it wasn't as scary as I had thought it to be! If you feel like saving some time doing make-up, then try it! If you don't like the maintenance of lashes then maybe I'd opt out. Depends on your rajin-ness and if you like the look of falsies (or really generous coats of mascara). 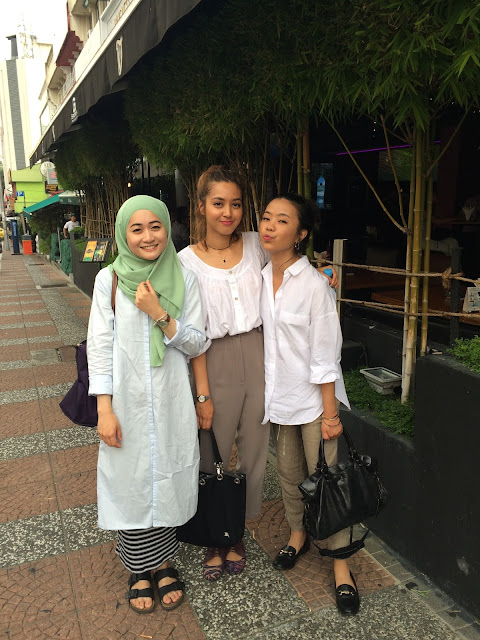 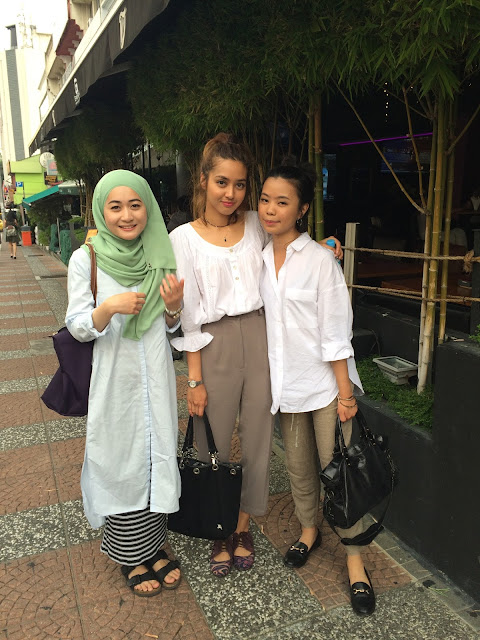 I look extra sepet with these lashes!! Marissa says it's because with extensions, they tend to look really thick in photos so it makes your eyes seem a lot sepet than they actually are. Because I wear 2 coats of lashes on normal days and my eyes definitely don't look as sepet in photos as they do now! 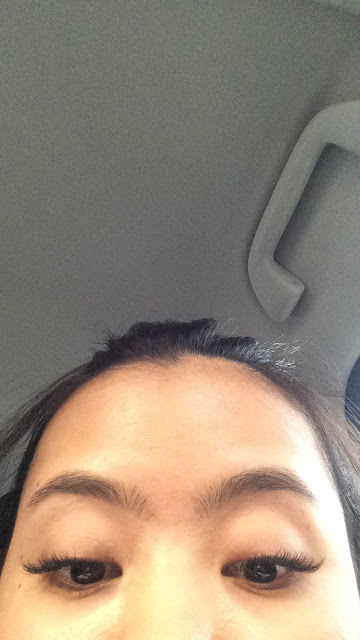 Hahahaha not the best photo but just to show you my new lashes! Better than my mascara any day anytime.

Here's the Facebook page if you're interested and you have to book before you go in because it's a 2 hour session so they only have so many slots in a day so it's best you tell them you're coming. They're really nice so even if you want to enquire and ask for opinions, I'm sure you can do that too!