woman of her own 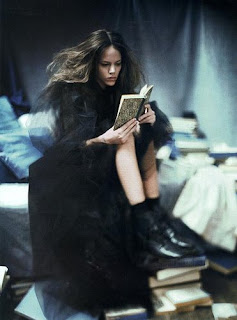 This is what i have become. Minus the clothes. And legs. I have stubby legs.

How are y'all doing ?
I miss blogging and i've resited the temptation to log in and rant about everything that's going in my life, but, the Form 3 History (Malayan Union and what not, which i actually find very interesting) seems to be calling everytime i sit my ass infront of the laptop. Hence, the absence of newer blog posts. And me.

Today is the first day of our trials. Nerve wrecking like shit. Mainly because it's being held in the hall and well, the halls are very nerve wrecking. Something about it just gives you the creeps. Ok, maybe not the creeps, just the tiny spook of THE FACT THAT PMR IS JUST WEEKS AWAY (i wanted to say 'days' but that's not good for my shaken soul HAHA). I sit in the middle. I was right infront for the previous exams. 2nd from the front to be precise. Now that i'm in the middle, it's better. Why ? Because i won't be distracted by the teachers who do nothing but gossip and look up once in a while to see if i'm listening. I do. Well, a little bit. I can't seem to focus with them around. Sitting in the middle is like an equal distance from the teachers who are stationed back and front. Though i can't kick my friends chair for a little peek or anything (which i hardly do, by the way. did it once. or twice. i'm not telling), I like the middle section.

AAAAAAAAAAAAAnyhoo, (that little boy genius from My Wife And Kids who's in love with Kady, gets me everytime saying Anyhoo and doing that swiping motion over his head, too cute) today was bm. Aaah. My mother tongue.
BLOODY CRAP IT WAS FREAKIN' HARD. Not a fan. Question 3, 4 5 was hard. What's mencecap or what crap lah. But hey, on the upside (not exactly), my name was the first word for the first question in the exam, hohoho :D
Words and terms were confusing. It kills me to not know the words. KILLS

BM Paper 2 was as hard as the paper one. The karangan berpandu was a real pain in the butt.
We were all expecting jalan raya but instead, TOTAL opposite, and playgrounds were out. -__________________________________________-" I actually blurted, 'WHAT?!' when i opened that section.
Did my ringkasan first, and the questions. Didn't quite complete the questions at first because i was at loss for words. Literally. My brain went to take a break at the most inconvenient time and took it's own sweet time to make it's way back. DID NOT appreciate that.
So left it for a while and decided to do the karangan berpandu. Did like 2 perenggans, and left it cause i was wasting too much time thinking on how to get the isi's. So left THAT and went on to Bahagian D and did the whole thing since the isi that i practically drilled on to my brain was still fresh. So finished THAT. And did my bahagian C. None of them were easy. I finally settled on the cerita where i lied to my parents. Wrote about me going to a concert without their knowing (who i also included went to London and the friend i went with was Kyrina, sorry babe, you were the first in mind haha ). I had doubts but the rest were harder and there were some times when i felt like stopping and try another one but i thought "Gee, that's stupid, might as well get this thing over and done with" so i did.
I finished at 12.55.
I was so gelabah, cause i still had like 2 others to finish like the questions and the karangan berpandu. I wrote crap. At one point, wanted to actually WRITE 'CRAP' but didn't.
Finished.
Time was up.
After my paper was taken, talked a bit and realised that i didn't tie my bahagian D to the other essays so rushed to Cikgu Mas'aud.
Seriously, i'm dead for.

The only thing motivating me to get 8A's is the things Mama promised she'd get for me <3
Not going to brag cause well, that's not what i do. Hihi


All the best to those who'll be sitting for trials !