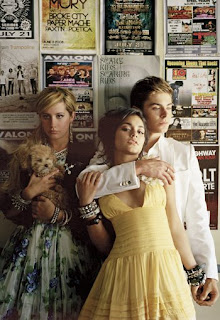 Lawa kan ? I hate Vanessa so much because of how pretty she looks in every outfit she wears (except for her er, revealing 'debut' on the Internet). Anyway. I'm so bored. I studied Sejarah but got bored so here I am while waiting for my pizza to arrive. Nothing much happened today. I haven't gone out with friends at all. Unless you count me going to Fatimah's to study which didn't quite last long becaue we were talking too much and decided to watch 21, which is a good movie by the way. Jim Sturgess is <3 Sexy guy of mine hahahaha. I haven't been studying either. WHAT A PROGRESSIVE HOLIDAY

I miss school. I don't, however miss waking up so early. Such a bliss, waking up at 11 without any interruptions. Ahhhh.

Lama tak berlibrary la. Seriously i gotta buck up. I keep thinking to go out with my friends but i feel so guilty doing so. -_-" Then i assure myself by saying, "LEPAS PMR, KAU NAK KELUAR BERAPA JUTA KALI PUN BOLEH."
HA HA HA

BESTFRIENDS are the kind of people who have only seen you cry when you're laughing so hard.
Mana dorang ?