So I was psyched for Nottingham since the day I got here. I was counting down the days. And it finally came.

Didn't sleep the whole night because knowing me I might have slept the whole way through and miss my bus. Left for Uni at 2:30 am and we made a move at 4 in the morning. Caught some shut eye in the bus. I was expecting it to be a long journey but it wasn't as bad as I expected it to be. We were there by 6:30. Sejuuuuuuuuukkkkkk !!! Nottingham was freezing! It was so sejuk that the whole lot of us were shivering throughout and at one point malas dah nak keluarkan cameras and phones because it was too cold to allow our little frail hands out of our pockets. My hands, I swear, looked swollen! The coldest I've experienced since coming here this year, to be honest. 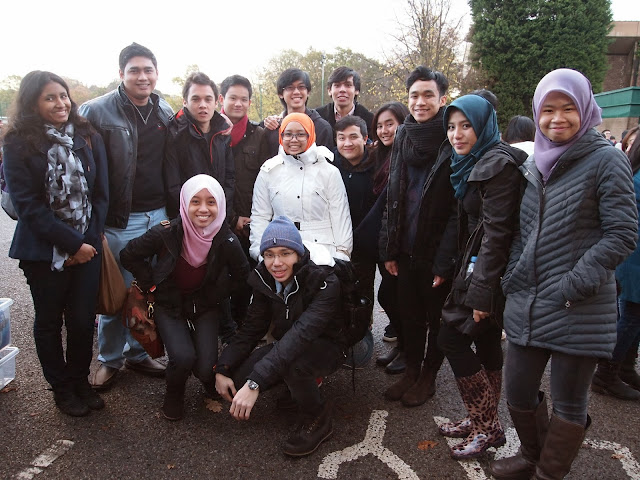 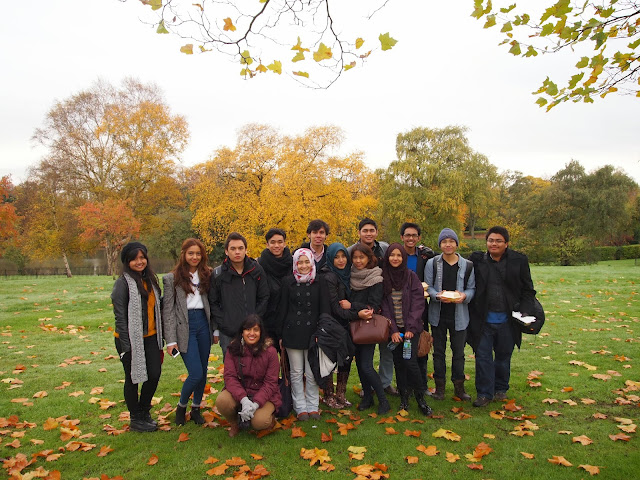 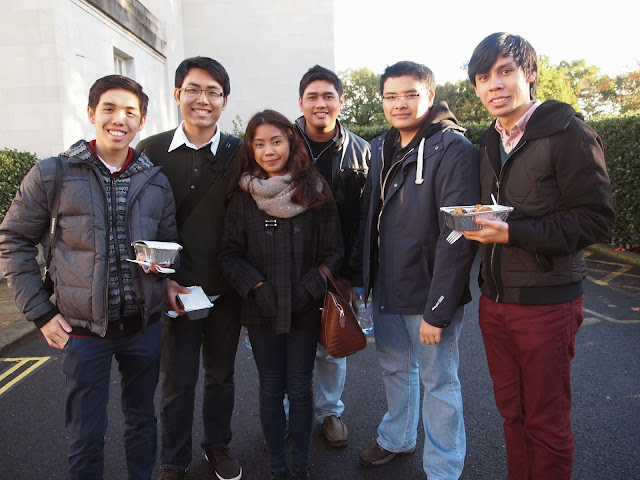 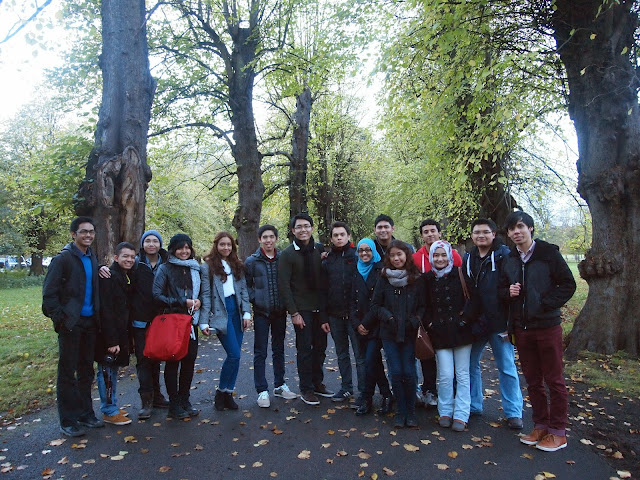 We hung around for a bit before making our way for food. I was so excited I could've sprinted my way there but alas, my athletic abilities are pretty much non-existent. So I walked (UPHILL) ok not so bad lah uphill dia but still! And it was cold. But it was so nice to see Malaysians and catching up with friends we haven't seen in so long was so much fun. 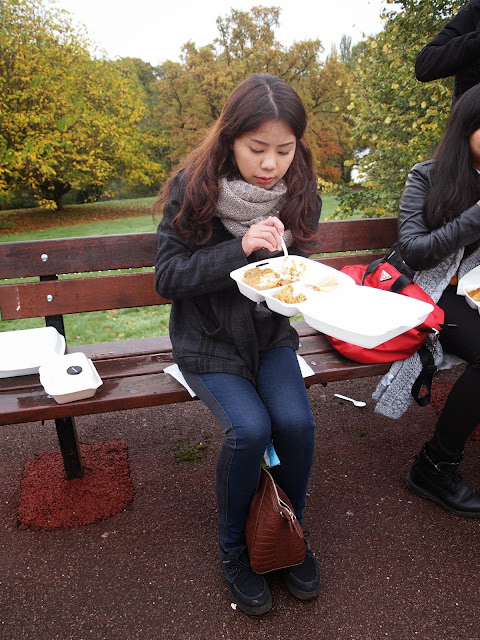 Nottingham campus is humongous. HUGE. It didn't feel like a campus because of how big it was. Anyway. We reached the food hall and it was jam packed with people. Couldn't even move about to see what food they were selling. SO many people, I had to leave the place without getting anything first because it was so stuffy and I felt a bit claustrophobic (and I'm not one for claustrophobia in the first place!). Only to realise it was cold outside so I went in again hahahaha this time, I got rice with chicken curry. I only opted for that because that was the only stall that had the least amount of people queueing up for it. Wanted to get nasi lemak but the line was so massive and it was £5 which I feel, very overpriced and so I wasn't willing to buy it. Atleast the rice i bought came with spring rolls, chicken wings and a samosa I think. 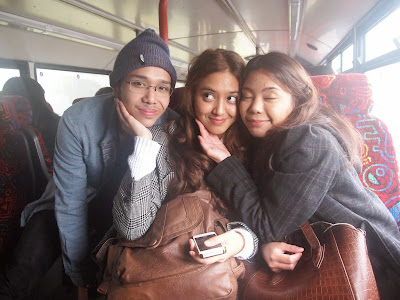 So we walked to find a place to sit. Found a bench and the warmth from the hot food made it more sedap! After eating, we wanted to head back to the sports center AND GUESS WHO CAME AND SURPRISED US ALL!?!?!?!?!?!? MARISSA !!!!!!!!!!! Oh my God, you should've seen me. I legit couldn't believe it even though I had the slightest feeling she was going to come. But it caught me off guard and I was soooooooo pleasantly surprised and seeing this friend of mine instantly made my whole day and my whole week. I've missed her way too much and from seeing each other in college all day and all night, it was SOOOOOO good to see her again. Hwaaaaaaaaaa she's the sweetest and the bestest and the absolute loveliest.

Went to the futsal place outside of campus so we got to ride the shuttle. Of course I ran straight to the back seat because that's where it's warmest. And of course this happened.

After seeing the football players (namely just Izmal and Paan), we headed back because we wanted to go see...... 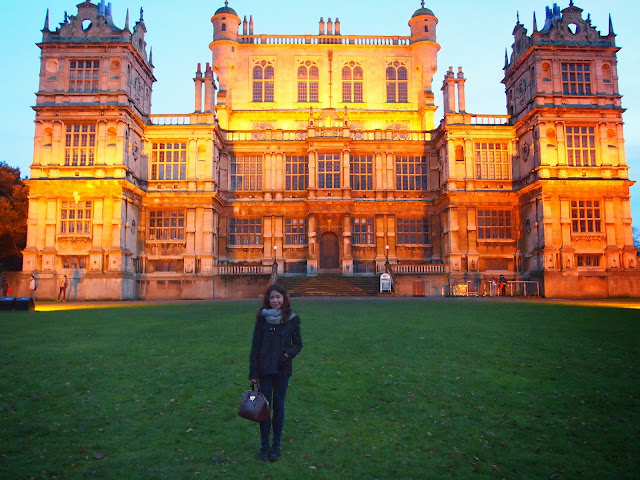 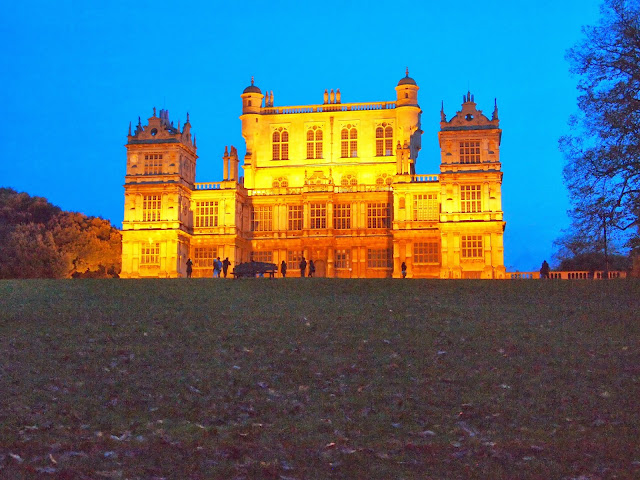 ...... RUMAH BATMAN!!!! Y'see, Wollaton Park is this place in Nottingham where there was the Wollaton Hall. And Christopher Nolan shot parts of The Dark Knight Rises there. When I saw this on the Nottingham Malaysian Games Facebook page, I freaked out. I love Batman and the movies are brilliant. Iman is such a huge fan of it so I also terikut-ikut. But I immediately knew that I HAD to go there while I was in Nottingham. So we walked. And we walked. It's faaaaarrrrrrr and it was tiring. But this was something I had to go see and take photos and send it to Iman. Hehehe. Would love to bring her here one day!!

Have I told you how cold and ice-like Nottingham was on that day? Painful. Thinking about it brings painful memories........