Thought I'd blog and voice my opinion on some matters that have been going on these days.
As the title of this blog post would indicate, this blog post is me being really annoyed and angry about two things in particular. This blog is very personal to me and I try to be as honest and frank as I can so this is me just expressing my own opinions and thoughts. If you were to disagree with me, I highly welcome comments. I like myself a healthy debate so please do tell me your own opinions and thoughts, I don't mind it one bit.
- - - - - 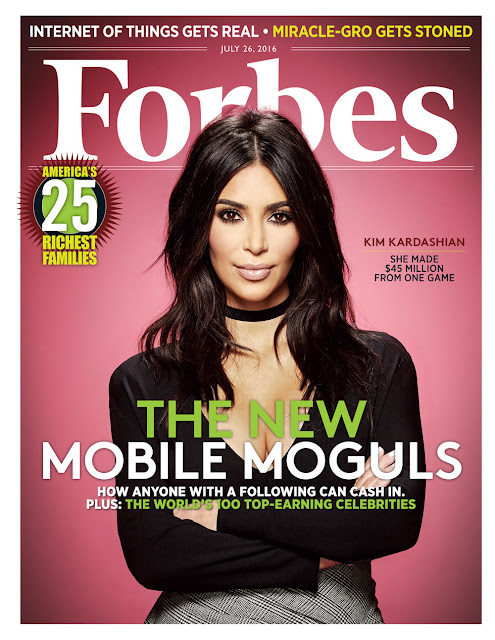 So I woke up today seeing Kim Kardashian on the cover of Forbes with the tagline "Made $45 million from one game" and then of course she posted it on Twitter with the hashtag #NotBadForAGirlWithNoTalent. And then there were some people on Twitter who went to her defence saying how people should not call her talentless because she obviously is cashing in a ridiculous amount of income.

Ok so this is where I get really annoyed. She is not a business mogul, she is not a businesswomen. She is a personality, she is a face, she is a celebrity. When asked what her job really is, she gets really touchy and say she's done basically everything from perfume, book to now, her game/app. But did she really though?????

I get so annoyed because there are so many other entrepreneurs out there who REALLY start from scratch and really had to climb a million hurdles to find any success. Those people are the real entrepreneurs and creators. Kim Kardashian is not; she is JUST a celebrity just stamping her mark on anything marketable. She has people doing things FOR her. She doesn't know the coding and programming of her app/game so in really basic, plain sight, that is NOT her developing something. Would that game still be interesting if I was the main character???? I don't think so. It's just the fame she is enveloped in ok, girls.

A talent is the innate ability to do something without having to learn it. Business, entrepreneurship, marketing is something you learn, it is not something you are inherently blessed with. When will people understand that being business savvy is not a talent; it is just hard work. I have Kim K on Snapchat and just this morning she was snapchatting her game and she was saying she was reviewing it and all she had to say, "Hmm I think this coat needs a little more black...".

THAT IS ALL HER OPINION OF HER GAME that she's cashed $45 million and gotten on the cover of Forbes for. I highly disagree with how people can say she is smart to market herself. She is *just* a person who became famous from a string of events (a leaked sex tape, hello???).

We need to find better and more accomplished and more intelligent women to look up to. More substance, basically. I don't like to openly say this about another person, what more another female, but I think it's high time we really find someone else to focus our attention to. We're cutting ourselves short if Kim Kardashian becomes someone we aspire to be.

Just in recent days, Raha Azlan posted a message that was sent to her by a complete stranger on Twitter basically telling her off for not wearing "appropriate clothing". Raha is a local Youtuber and also just happens to be my cousin. That said, I'm not saying all of this just because she is my cousin but because she is a girl. And I don't tolerate any condescending behaviour towards women at all.

I won't post a screenshot of the message here but I will link it > here < if you wanna read it. It was really outrageously rude and insulting to not just a hijabless girl but to ANY female. And in true narrow-minded Malay men fashion, he concluded it saying he was only telling her all this because it was his duty as a Muslim.

"Perempuan basi" in the same message as "tanggungjawab saya di muka bumi Allah ini".
What??? How???

FIRST, I am so fed up with this whole notion of telling people off and then concluding it with, "Oh but y'know, I'm telling you all this because I'm trying to be a good Muslim". No, you are not being a good muslim if you insult and borderline harass other people like that. Allah says to jaga your relationship with Him and also to the other people you share this EARTH with. Allah never tells us to be rude to one another, He wants to see us tolerate one another in the kindest way possible. If berdakwah and preaching is really what you want to do, do it nicely and do it gently. How effective do you think it is to tell women to cover up by being very condescending? Also please understand and realise that berdakwah does not only mean amongst Muslims, it also can mean to berdakwah to other people of other faiths so when these things go viral how do you think our religion will come off to non-Muslims???

SECOND, I abhor this thinking that if we don't don the hijab we are more prone to rape. How dare you tell us it is easier for us to cover up to prevent rape than for men to just not have horrible sexual intentions???????? It's not OUR problem we aren't covered up, it's YOURS for not being able to curb your pathetic sexual desires and fantasies. Get it together lah. What is this kind of mission going in Malaysia to have all women covered up???? We have so many things in the world to occupy ourselves with, let us deal with donning the hijab on our own terms and at our own pace!

THIRD, the replies and the comments following this message is really on another level. Some people have gone so far to BLAME Raha for posting it on Twitter and publicising this guy! Err? Why would she ever try to save his sorry ass? Why do people think that HE is more entitled to say what he's said than for HER to show people how she's being treated???? Rude rude RUDE. Berdakwah ada tempat, masa and CARA dia. You must be having a laugh if you think what he said to her was a form of 'berdakwah'. If anything, people like him give a bad name to what 'berdakwah' entails. Get it together, we don't dress and we don't live for you. We'll get on with our lives just fine because unlike you, we've got things going on for us. What was said to Raha was just ridiculously disgusting and rude and should not be tolerated by anyone who knows a thing or two about manners. We don't live in a closed off, backward society anymore and we're not about to so stop with all this.

I know the people I surround myself with and I know they're an intellectual lot so thankfully they don't share the same sentiments as the guy who sent the vile message but it's really scary to know there are PLENTY of people who do. This is just very basic common sense and logic, people! Don't be rude, don't be condescending and don't express your sexual desires outwardly to people you DON'T know. Islam does not teach us to be so so I really don't get how people think doing all this is your DUTY as a Muslim and that somehow this is all allowed???? Being a Muslim is not a shield for when you do stupid things. Don't do things in the name of religion to make yourself feel better.

xx
Written (technically typed) by Nadia Zainudin at 10:27 AM