Listening to Ed Sheeran at 12:22 am and it's raining outside. Perfect time to blog.

Also, 'cause I'm not sleepy.

Shall blog about London and how fun it was. Really missing it now albeit the countless times I wished I were home when I was there much thanks to the dreadful cold weather ! Not made for winter lah serious.

Tok Aa's cosy flat in Acton was our make shift home for our 3 week stay there. 3 minute walk to Morrison's so guess where we shopped first once we landed in London town ?

Yep, you guessed it. Morrison's ! I was so giddy over everything because everything was so prettily packaged and nampak sedap gila ??? I especially became most excited when I saw the orange flavoured Kit Kat ! It was here in KL for the shortest period of time before it got axed. I've heard so many people say that it's not nice but I love it!!! Anyway. Moving on.

I loooooooove London ! More than anything, the trip has just fueled my determination to study there because of how much I love the UK. From the people (ESPECIALLY the people) to the M&S food hall to the transport system, I just love love love the UK. I had the best 3 weeks holiday and really, it has made me want to study there next year even more. InsyaAllah.

We went everywhere...... 'cept for Winter Wonderland only 'cause it was too cold for us to leave after 6 to Hyde Park hahahaha. We were usually back home by dinner because all of us tak tahan sejuk (k fine maybe just me and Mama) so we (read: "I") insisted to have dinner at home.

When people ask me how was London, I merely reply and sum it up in one word - cold. Really! My mates in London now are probably scoffing at how weak I am because it's a relatively warm winter now compared to when I was there late November. Cis bedebah!

So that's 4 layers for me and gloves and socks and scarfs. I was bundled up all day errday ! It got tiring and frustrating though by the 10th day because so many heavy layers can really menyakitkan badan. Tambah lagi the cold weather; my bones were aching by the end of the day ! How on earth am I gonna live there if I do next year ? My dad reckons I should just study here because he thinks I'm way too Malaysian for London what with my obsession for spicy food, warm weather and my rather unhealthy love for Jozan hahahaha

"So Melayu lah you!" my parents would say after I get up from my chair to get myself a 2nd helping of rice. 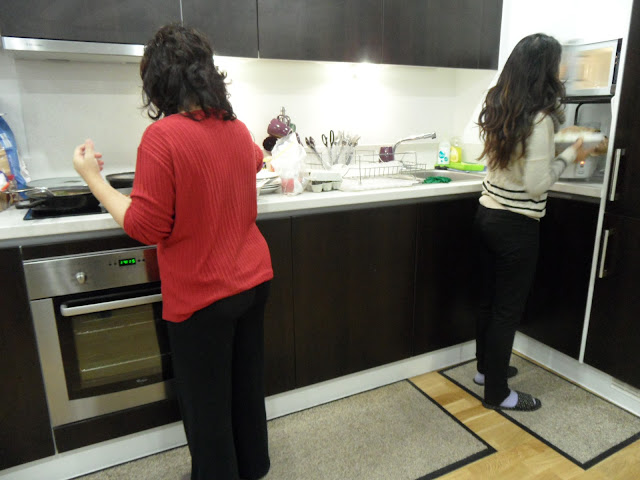 Watch as I tambah nasi.

Mama insisted we sight see before we do any damage at Oxford Street......

Sigh. We will never learn!

But Oxford Street/Marble Arch/Bond Street can all be counted as sight seeing riiiight ? 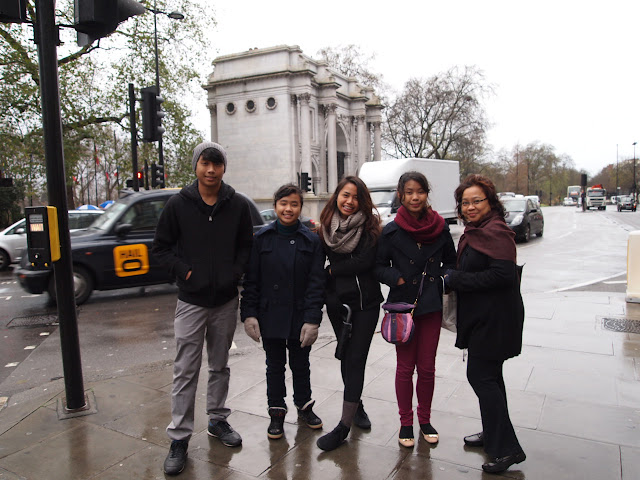 Also, look at how unprepared I was for London! The atrocious flats with socks blunder ! The horror. Bought my River Island creepers on the 3rd day because this got too embarrassing. 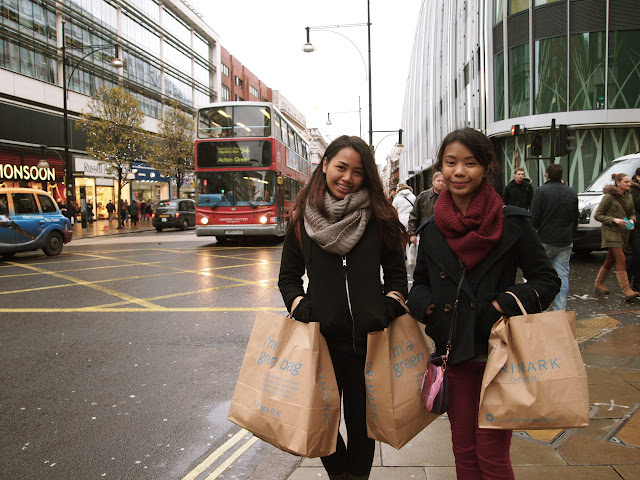 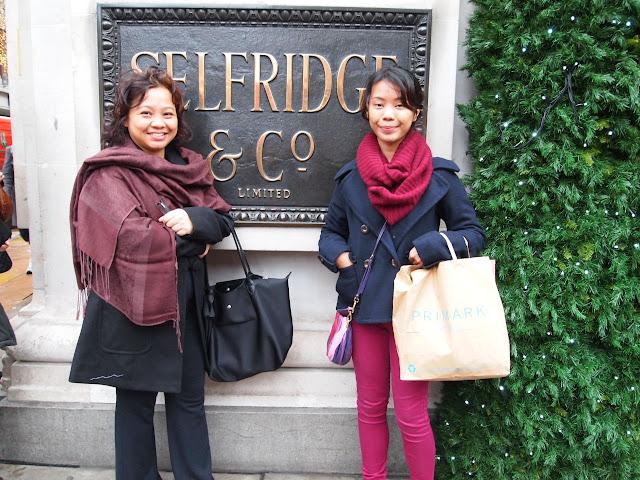 Ahhh Selfridges! Bought my NARS powder here when really, in fact, I could have gotten it anywhere else. But I had to get that yellow paper bag some way or another kan ?

And Papa introduced us to his favourite ever salt beef sandwiches. Tried it and mleh, I preferred the egg mayo sandwich from M&S Food Hall lolol seriously the UK has the best sandwiches I don't even know how that's possible.... maybe it's the bread.

No, yeah definitely the bread. 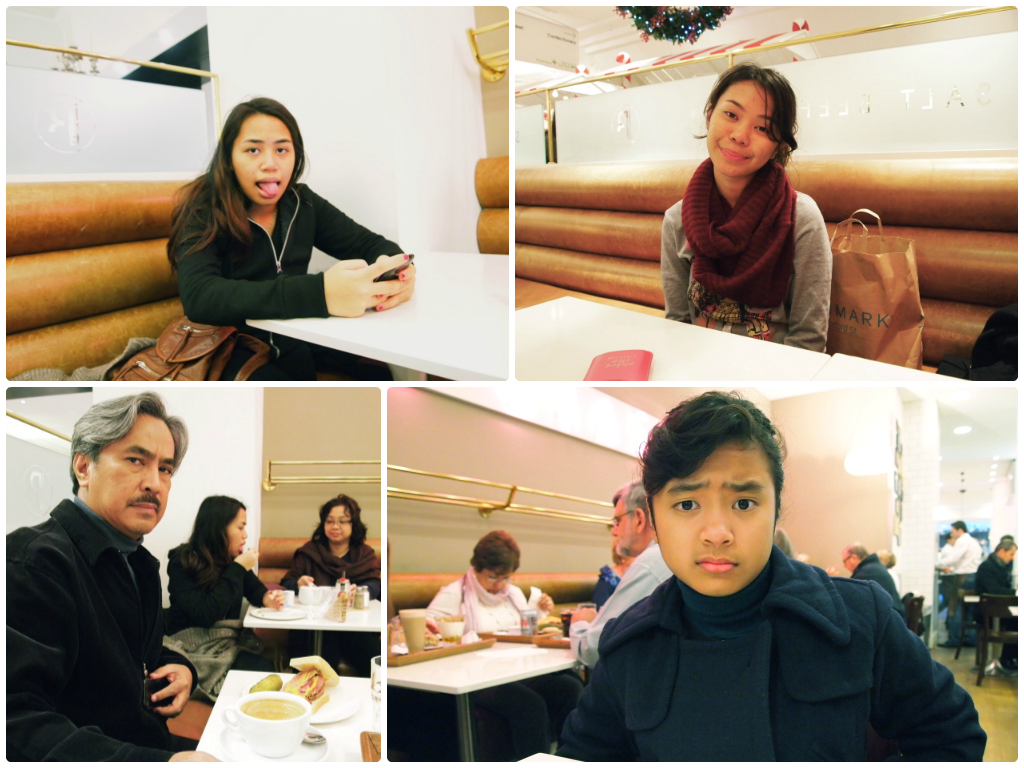 Us at Selfridges, waiting for our sandwiches.

Last I went to London was when I was about 7-8, and by then Iman was only a baby so she didn't travel with us and consequently, missed our Hamleys experience where we tried on cool masks and did everything a kid should do. We have it on video and everytime we watch it, Iman feels left out 'cause she wasn't there at the time. So this time 'round, Papa brought her to Hamleys and it was her turn to FEEL THE ULTIMATE HAMLEYS EXPERIENCE. Only this time, Mama and Papa were too lazy to accompany her around the store like how they did with us. So I volunteered and gave her the tour.

She tried on masks... 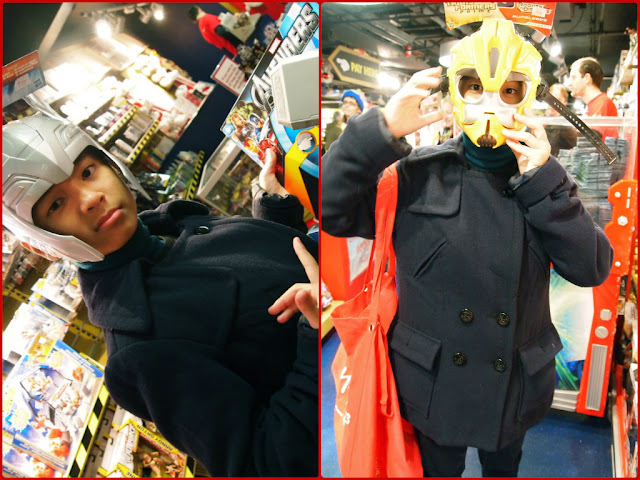 ... and played games with the FRIENDLIEST shop assistants ever !! 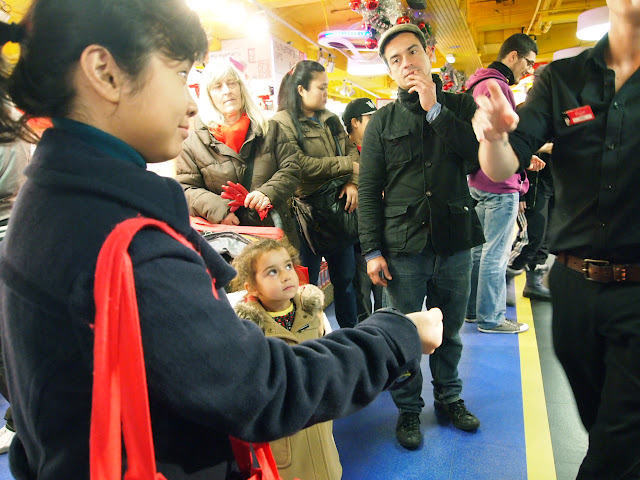 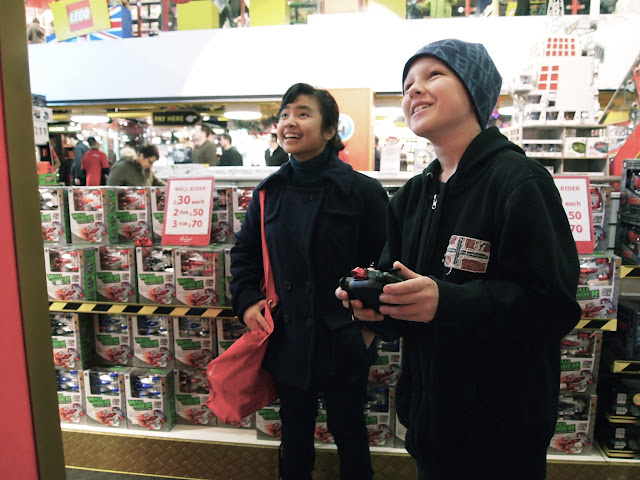 We had a blast and I'm genuinely so happy Iman got her fair share of toy shopping in Hamleys too. It's only fair ;)

Also, if you're in London, how can you not go for Madame Tussauds ? I've never been to one so I was stoked to finally go and touch and take photos with famous people albeit waxed. 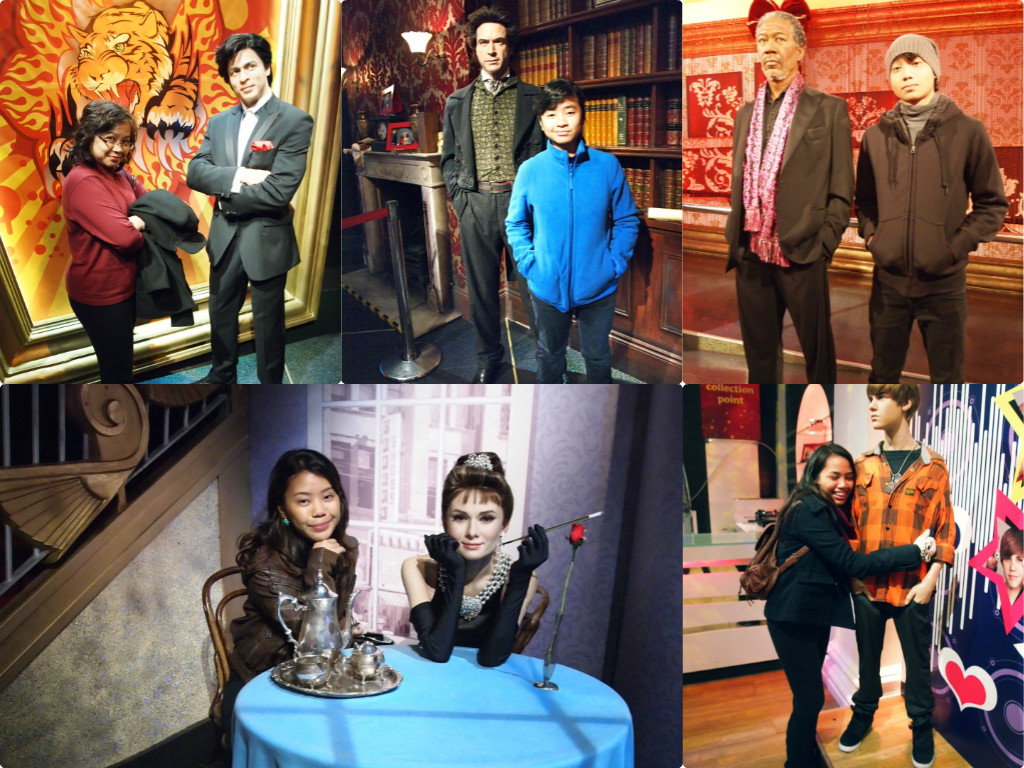 It was sooooo ~ much fun ! Had to take double takes at times 'cause some looked so real. Now, I really wanna go to the ones in America; imagine the waxed figures there !

Went to Covent Garden for fun. Came across one of the best baked potatoes eva. Maybe 'cause it was something hot I could consume before the cold got to my body and freeze me over. Potato covered in cheese; holy shmoly y'all missin' out on life if you don't try 'em once you're in London or anywhere in the UK for that matter. 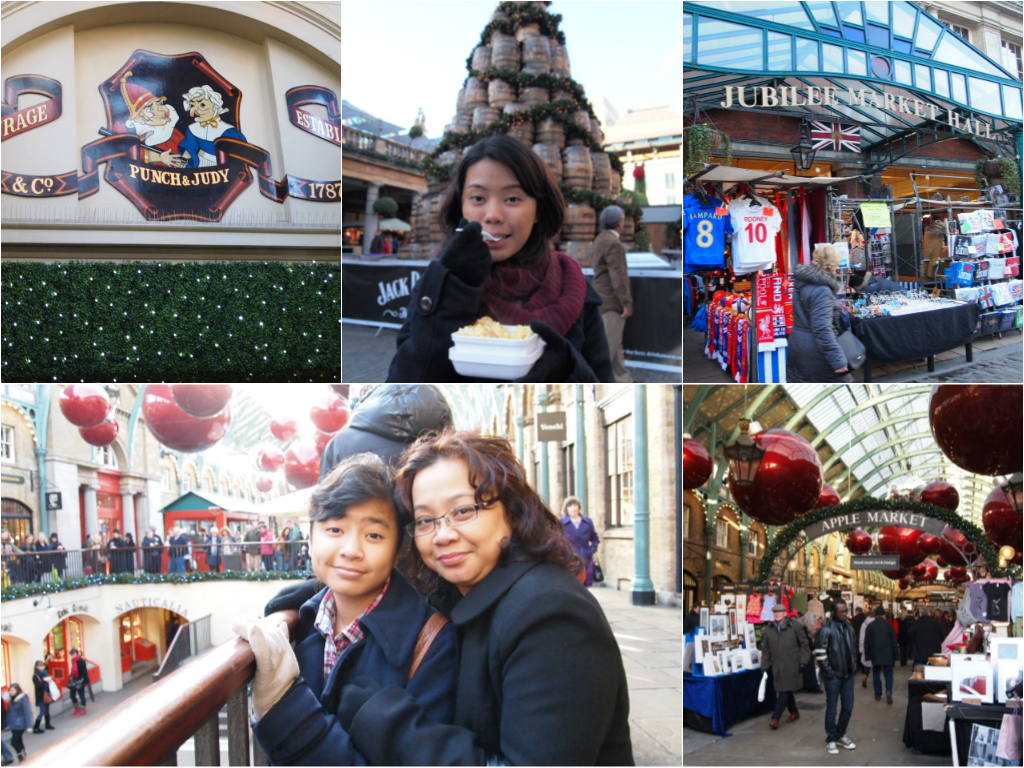 Really regretting not going into the Laduree shop there ! Such a cool place to get knick knacks and the food they were selling were so tempting.

Amidst our Oxford Street shopping, Papa brought us to this narrow alley that led us to St. Christopher's Place. So pretty the lights ! Had the coolest quaint shops and restaurants and looked and felt like a escape route from the hustle and bustle of London streets. 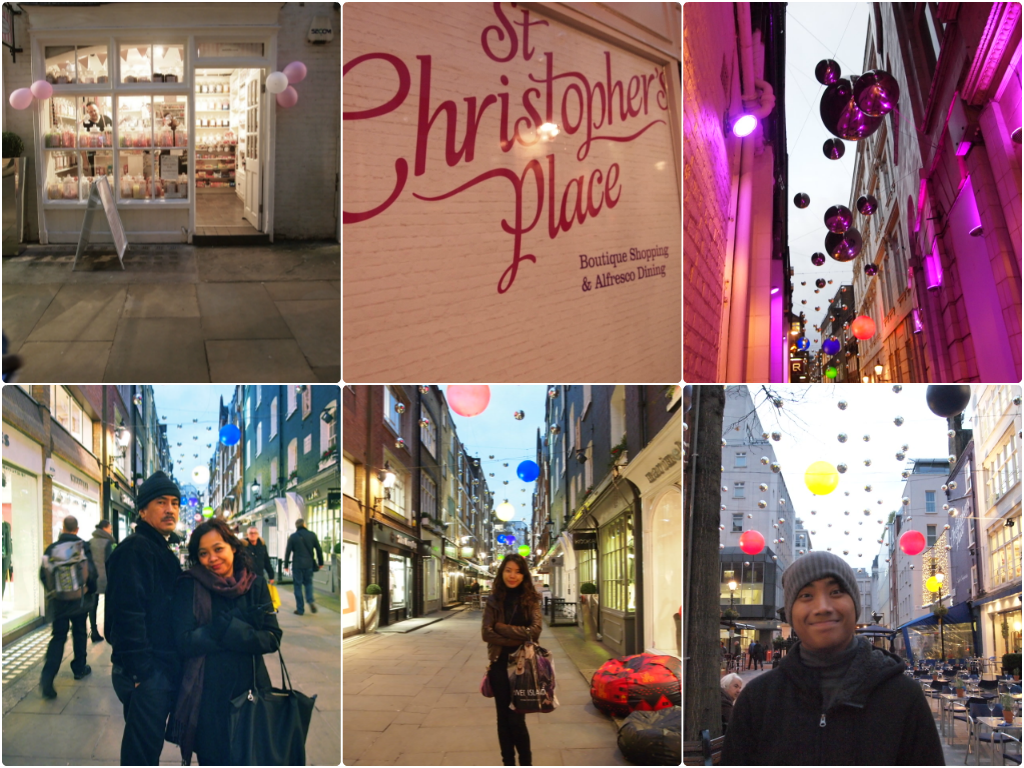 Phew ! Y'all tired yet of the heavy duty collages ?

Gon' call it a night and continue my London post in the next few blog entries. So many photos but alas, this ain't Tumblr and I'm not up fer it even if it was.

Written (technically typed) by Nadia Zainudin at 2:04 AM