Partying Up In Paris x 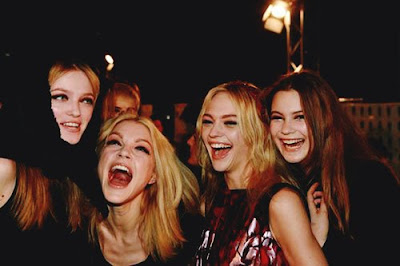 Well, hello non-existent readers. Bored out of my mind.
Hafiz took me out yesterday to KLCC and Pavilion. Watched The Green Hornet. Was ok though he reckoned it was good but meh. Twas just alright. Bought some stuffs. As usual, headed on to the make-up section at Topshop. Bought another crayon (call me obsessed but I freaking love them !), another kohl, a lipstick (this time in Beguiled), and nail polish in Galactic. I can't seem to stop buying them. Serious major uber mad love. Not only are they affordable (do I sound like a commercial yet ?), but they're actually quite good. Bought their face wipes a.k.a. make-up remover though quite reluctant as I just love my Biore ones but they were surprisingly pleasant to use. They smell amazing and they get rid of my make-up quite good.
I was trying out some things and this one sale assistant, whom on my previous trip to Topshop my lovely mother told her she looked like a singer, remembered me and was all friendly and asked if I was Chinese. Um.. no ? I actually think it's quite flattering but honestly, I have no resemblance to a Chinese at all. She told me it was 'cause I had Chinese looking eyes. LOL. Ah well, she was nice.
Went into Miu Miu. I still LOVE that patented leather wallet in black with pink lining. It is divine. The bow in front makes it all the better. Thought the heavy price tag crushed my dreams of owning one. But God, it's lovely !! Moving on....
Went to Pavilion after that. And as per usual, made my rounds in Topshop. Same clothes (also the fact that I was not going to eat anything for dinner if I were to spend my last dime on some top I probably don't need) and then we went to check show times at GSC. Got tickets for Green Hornet and honestly, what a rip-off it is that they only have it in 3D. I really don't like 3D. In fact, I had my 3D glasses off. Made watching so much pleasurable. Gah, everything is in 3D now. What happened to good ol' 2D movies. There's even a 3D blusher at Benefit. I asked the sales assistant what that actually meant and she was explaining some thing which seriously ran off topic, probably trying to cover the fact that she too didn't understand. I mean, aren't we already 3D ? Whatever. Benefit's overpriced anyway.
Oh then we went to eat at La Bodega. FAVOURITE. PLACE. EVER. Seriously now. I can't even.
Went home shortly after the movie. Weather was nice and cool due to the rain that went on the whole day !
Onto a whole different topic, thinking of dying my hair. The only thing that's stopping me is that I'm worried my hair will just get even drier and more coarse. Thinking of giving it a go though. Hm.. quite torn.
Quite missing my friends. Some of whom are working, in college, in Seremban, and constantly busy with I don't know what. I actually miss school minus the having to wake up at an ungodly hour. But I do miss it. Maybe. Missing Sarah, Najihah, Suraya, Ila, Dina, Aimi, Yus, Yahi, Li May (for some reason!), Debra, Jia Wen (!), Ayesha, Kaveetha, Rachael, Brenda, Belinda, Ashley, Grace, Kristin, Amanda, Hakim Shah, Aidit, Marc, Jo, Sanju, Shahrain, Haikal, Hafeez, Haris, Hanif, Aina, Shira, Kyrina, Fatimah and bunch loads of friends. Met them last on my birthday do ('cept for a few). Sorry if I missed out on some. It is 4 in the morning now..
I seriously just want to go travel somewhere and have a mini road trip with my friends. Seriously, people !!!!!!! What happened to that plan :( Was looking forward to it..
This is turning out to be quite a long and dreary post. And since everyone is hooked on Tumblr nowadays, hardly anyone gives a damn on blogs that actually have people BLOGGING.
Ok now. My eyes finally are giving in so shall head over and sleep.
Good night and God bless anyone reading this ! x
Written (technically typed) by Nadia Zainudin at 2:51 AM