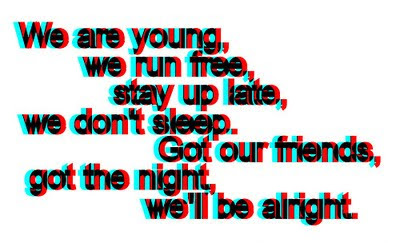 I tend to blog in the middle of the night. For example, 2:55 in the morning.

Spent my day watching Glee's episode on Valentine which was quite sweet. Artie's take on PYT was so go000OOO00d. Loved it ! As well as Blaine's 'When I Get You Alone'. DAMN SON.
Then naturally, I went out with Mum for tea/early dinner. Settled for Devi's. Ate roti telur and my maggi goreng YUM. Then went to fetch Tania from tuition. EXCITING STUFF AIN'T THIS ?!?!
And I watched what seems to be one of my favourite movies now; Never Let Me Go starring ANDREW GARFIELD (cue Nadia shrieks), Carey Mulligan and Keira Knightley. Can I just say how much I love this movie ? Granted, it can be a bit slow at parts but I thought the story line was so crazy good. I'm so looking forward to get the novel now. I didn't expect it to be so heartbreaking but it was and I was just there, bawling !
For those who have watched it, you should and would understand what I'm about to ramble on but if you haven't (and you should if you're like one for the dramas instead of the romantic comedy), I suggest you to just ignore this part here. So anyway, I just thought the whole movie to be really just, sad. I mean, how horrible is it to have created for the good of other people and not for yourself. Particularly heartbreaking when Tommy and Kathy went for a deferral and got denied. I was just so sad to see how Tommy was very excited at the idea that he could spend more time with the girl he was more in love with but got rejected instead. UGH EMOSI. And it was so despairing to see the scene where he just got out of the car and screamed and letting go and seeing Kathy come out of the car and just hugged him in where ultimately, Tommy succumbed to his emotions and broke down in Kathy's arm. YOU BET YOUR 50 BUCKS I CRIED LIKE THERE WAS NO TOMORROW. Bloody emotional siot.
Ok moving on. Super serious I can't wait to get my hands on the novel. Definitely made it onto my favourite movies list.
I don't mind starting college. I'm simply that bored. I mean, it could be kinda fun to be in a new environment and making new friends. If anything, making new friends would be kinda awesome as of now. If I had all the money in the world, I would ask to be in a college/university overseas like.. right now. LOL. For the time being, I just kinda want to go travel. I'm spending my first weeks as an 18 year old girl, cooped up in my room and Youtubing every freaking thing there is to Youtube. Let's hope for some progress come March. And no, I refuse to believe any sort of news regarding the SPM results.
Ok let's tidur now. I LOVE ANDREW GARFIELD AAHHHHHHHHHHHHHHHHH kbye x
p/s : Andrew has a girlfriend btw. Um. And he's bestfriend is Robert Pattinson who, if you might recall, I had this humongous bigger than life crush on. AHHHHHHHHHHH
p/p/s : Hi Jan :) rindu please !
Written (technically typed) by Nadia Zainudin at 2:49 AM