Was in London for the weekend to see my brother who just got to the UK the past week.

My parents, as much as they say they trust us to be the independent kids they've taught us to be all our lives, are still parents. And parents, regardless of anything, are worrywarts! I admit I was also worried because I'm the eldest in the family so I've always assumed the role of the gelabah sister and I always keep check of my siblings once in a while to know how they're doing and what they're doing and where they are. Sometimes, I act as a liaison between them and my parents as I assure them (my parents) that for the millionth time, they're (Z, T and I) alright.

But yeah, so when he came, he didn't have his sim card for a UK number yet so he had to heavily rely on readily available WiFi and I've been there before so I understand how frustrating it is to not be able to contact anyone. When I first got to the UK, I was still on my Blackberry. GUYS, if you only can understand the difficulty in that alone. My Blackberry that died every 3 seconds. I was trying my ultimate best to be a Blackberry advocate but it got too hard on me so I ditched it and hopped on the iPhone wagon not too long after that. But thankfully, I traveled to Bristol with Azam and his very very kind father so I had help the whole time. Zaim didn't so lagi lah kan. And I had an iPad so I carried that everywhere I went and stealing WiFi from cafes and iMessaging everyone. Basically, it was difficult and annoying.

Contacting Zaim to ask where he is and how he's doing was so troublesome! That boy doesn't have his Whatsapp last seen feature (he chooses not to let people know when he's on Whatsapp or not) (whatever) so it was difficult for us to know his whereabouts. Alhamdulillah syukur, he was fine and dandy and managed everything on his own. Proud sister right here! I'm actually really proud lah that Zaim and I managed registering university all on our own considering I have some friends who have their parents with them the first 2 weeks they're in uni.

But yeah, all that got me thinking. How did my parents manage without the use of phones or emails or FaceTime or Skype and all that! I remembered Facetiming my parents ALL the time during my first few months in Bristol hahahaha and to think all they could do was write back home.

My mum told me she would write to my grandparents every fortnight just to let them know she was doing alright. And now we can do it in less than 10 seconds via Whatsapp. Times have changed, and all for the better, I must say!

Before flying off, my dad confided in me and told me that he risau a bit with Zaim flying alone to the UK and handling everything on his own and went on to say during last Summer when Tania was here for a month, he didn't have a SINGLE worry with his 2 girls off to Europe alone. He was more than confident that we could more than manage ourselves. We did. But that just goes to show the difference between boys and girls, I guess. Of course, this is me broadly generalising but in my family, Tania is the most independent followed by me and then Iman and surprise surprise, Zaim comes last. LOL.

But phew, my brother now has a sim card and I can Whatsapp and call him as much and as often as I want. However, I'm a cool sister so I'm not going to do all that. He still doesn't have his Whatsapp last seen feature switched on but all is right in the world again, alhamdulillah. 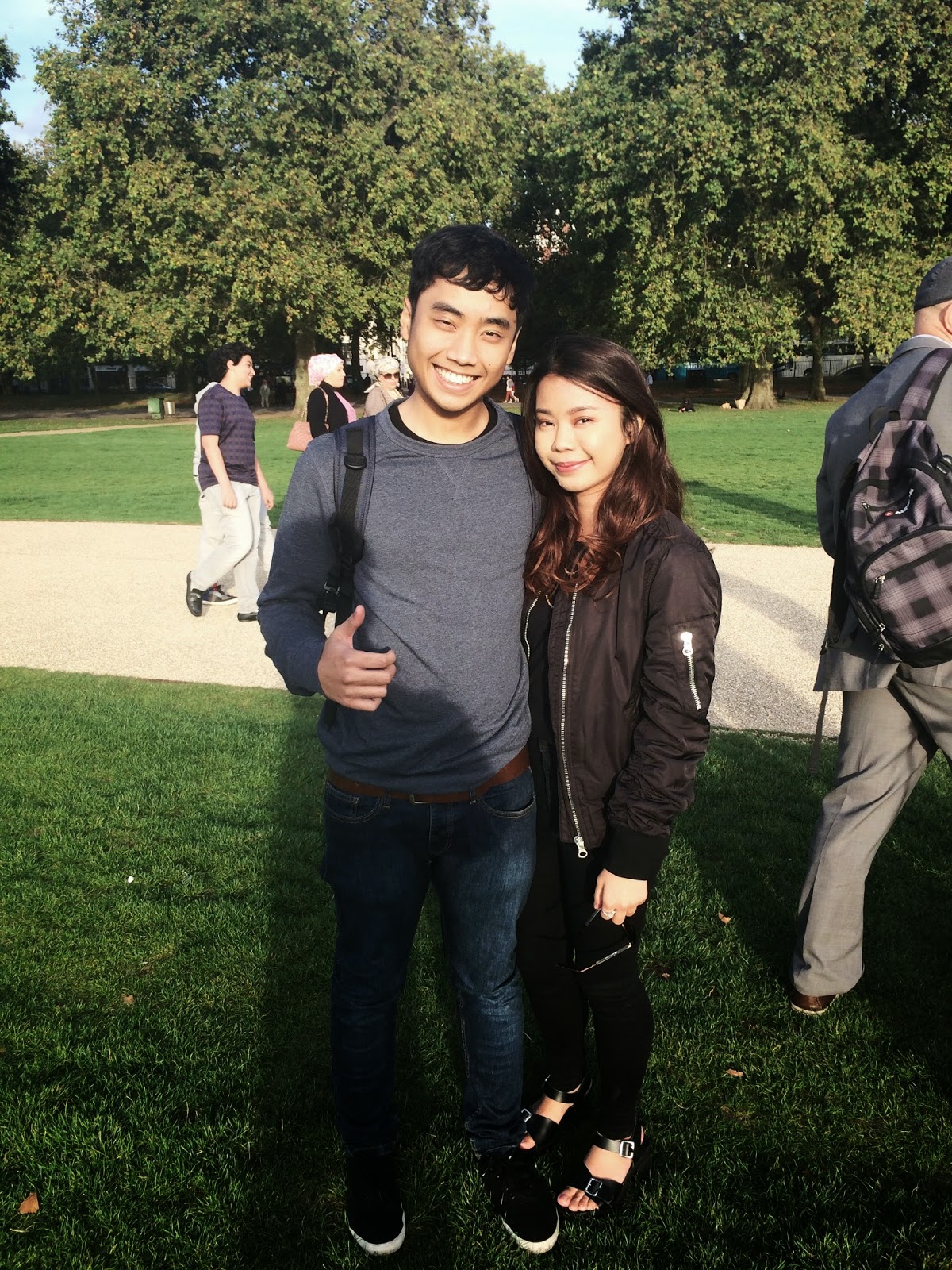 This is me and him on Raya Haji in Hyde Park with the beautiful sun glowing on us. Our Raya getup is so happening, right guys?????

xx
Written (technically typed) by Nadia Zainudin at 7:36 AM