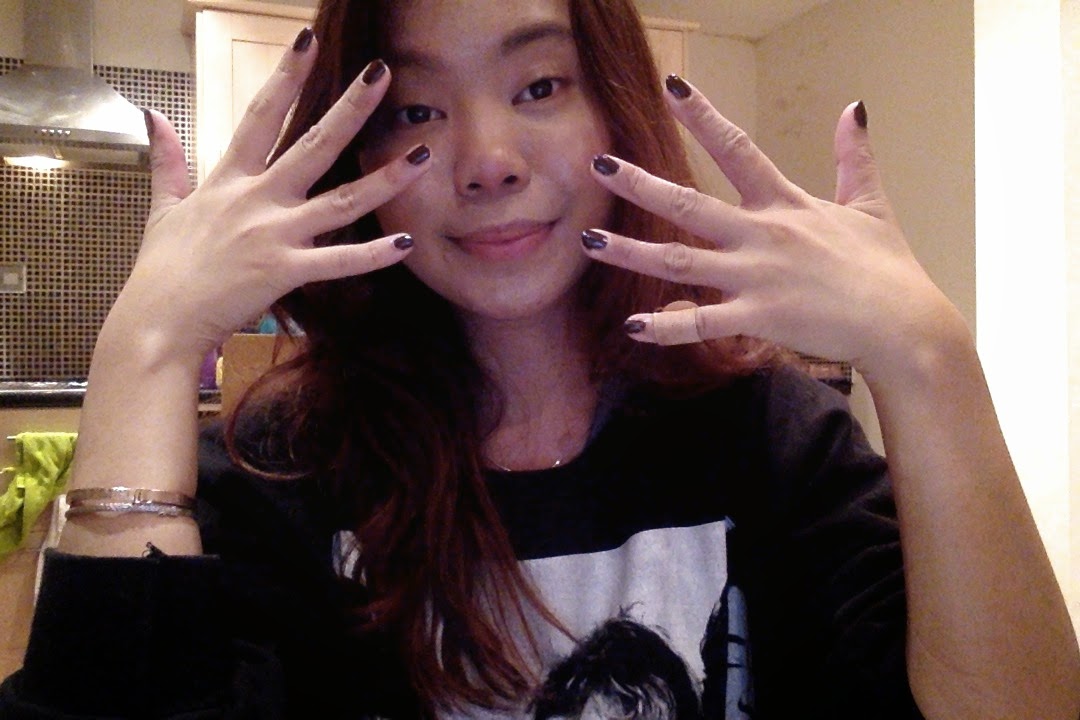 I don't remember the last time I had my nails painted! I keep forgetting to do it and then before I know it, time to cuti ends and bare nails for the next 1 month. Repeat cycle.

I went to the city again today for the sole purpose of getting an umbrella because yesterday, as I was walking to uni, it rained. And it rained heavily. It was pouring so instead of walking the whole way (which is what I always do), I decided to just wait at the bus stop (that btw does not have any form of shelter) because according to the bus schedule, one was due in like 2 minutes. My umbrella was broken so I didn't even bother bringing it and so I only had my scarf to cover my head.

Guys, it was pouring.

I walked back, drenched. As I approached my house, I called the taxi and as I was about to ask for one, it stopped raining completely.

So I was still on the line with the taxi operator and I was thinking hmmm should I pay £7 for taxi fare (yeah taxis here are RIDICULOUS, you'd think we were living in freakin' London or something) considering it's stopped raining and walking would be free or speed walk to uni since class is starting in 10 minutes time and the walk to uni takes 10 minutes.

My financially sensible part of me said, "£7 can buy you a GBK lunch, so just walk" so I did. Uphill. I don't make such a big deal because after some time, the walk uphill isn't too bad. Unless, of course you're rushing for class.

I hate being late for class so I walked as fast as my body could permit (I was on an empty stomach by then) and record time, babes! 6 minutes!! Wahhhhhh so tiring, I was panting so much by the end of the uphill.

I was wearing the flimsiest of flats so I had to battle water puddles and my scarf was wet from the rain and it was cold and windy so by the time I reached the top of the hill, I was breathless and could not feel my legs.

I made it to class just in time but I was still panting ridiculously. One would think I just got done with a marathon or something. But um??? It kinda was like one???

So I vowed to get an umbrella. I told myself "Buy 2 if you have to!" It was a necessity at this point because I don't have a jacket or coat that comes with a hood so I pretty much go around with my scarf as the only form of shelter from the unpredictable rain that UK is all too familiar with. You NEED to get one, I told myself. A must!!! Have one at home, in your handbag, in your school bag, just get a damn umbrella.

I went to the city today for the sole purpose of getting myself one. So semangat to buy.

So firstly, I went to Primark and got a pair of boots to last me til December because my Topshop and H&M flats were not doing me any good and now that it's getting colder, I need to get serious with my footwear (my good ones are at my grandaunt's house in London and I completely forgot to take them back with me) but as always, I got sidetracked just a bit. Then, I went to M&S to get my favourite prawn crackers and some other things. I bumped into Sofia and sat down with her for a bit before getting the bus back home.

On the way home, I remembered something.

I forgot to buy the umbrella.