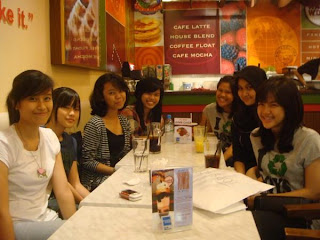 PMR HAS FINALLY COME TO AN END
After Geo finished, you could tell that everyone in the hall was relieved (including the external teachers who have been nothing but nice) that it was over.
PMR was everything everyone could really occupy us this year so now that it's done, we're free.
<3333333333
I'm happy like helll that it's over


So after school, I went back home (ecstatic nonetheless), and changed and out out the door I went.
Stepping foot in OU was different now that I can't be guilty for not studying. HEHE
So, rounded OU while waiting for the girls. Met alot of students, still in uniform (obviously couldn't wait to spend time out).
Those friends of mine didn't even tell me that they've arrived and were in the salon, -_- jahat gila.
I'm alone in One Utama, WAITING for them and yet, tak cakap pun dah sampai.
So i went to shop alone first. Bought a cardi from Zara. And THEN, Ila called to meet up. Heh. Showing some courtesy is always nice, y'knw.
But then, everything was good though things were strange at first. I was still upset but i didn't want to ruin my first day out.
We went to the second wing and Ila brought me to the Apple shop and showed the new iPod Nano Chromatic <3
It's love, basically. IT COMES IN PURPLE AND HAS VIDEO STORAGE, raddd. 600 bucks is worth it, honestly.
But i still love my iPod Vid though. );
Met up at that place near the escalator (extremely hot). Met alot of people, so basically i was shouting my Hello's and exchanged hugs with some.
And waited for people.
Met Wan (!), cause she was with Hafeez. Such a nice girl.
Got bored and decided to continue shopping. Ila and I tried on that beret in Topshop and i loved it. Not saying it looks good on me. Then we went to F21 to check the hats there. Bought 2 hairbands (I know, hairbands? But one was really pretty with feathers and a net hehe) and a pair of heart shaped shades.
Went to Zara and i bought a pair of flats (ala, duit raya hokay) cause my current sandals are rotten.
Ila found it so am eternally grateful to her cause if it were me, i could never never find one. I'm a fussy pot when it comes to shoes (expains why i don't have much) and i overlook everything. My attention span stretches to a measly minute when it comes to shopping. I just give one look and sometimes don't even bother to flick through.
AAAAAAAnyway
Browsed more shops and all in all, had a great time laughing with Ila.
We coudn't stand it so we went up to Topshop and got the beret, however ridiculous it may look.
Hehe
Went up to that place-by-the-GSC-escalator-totally-forgot-the-name-of-the-bistro and met Dina and Suraya.
Got hungry and settled for Waffle World.
Had fun and met quite a few kids.
Us '93s can't wait, i suppose :D
Went up and played some foosball ( i know, laugh all you want ).
Ila & Me VS Najihah & Wan
Najihah and Wan won most of it.
Hahaha
But was a surprise fun, really.
Then by 440, went in the cinema for Kami
At first, it was so empty we could jump from one row to another but then the crowd started to come 15 minutes later.
The movie was okay, a very sad ending, i actually cried -_-

Mum told me that there was a massive jam outside OU, and told me to stay put but some of my other friends told me they were going to be in Curve by then so wanted to go and say Hi
Followed Najihah back. Went out to Curve after prayers. Met up with them in Tony Roma's after saying RedBox tak jadi.
So Najihah and I went to eat at La Gourmet.
After done eating, we went up to play some foosball. Hehehehehehehehehehehe bodoh
Had major stomach pains due to laughing
Bila dah menang, buat ah muka seposen bajet poyo.
HAHA
Whilst playing, mum said they're JUST leaving for dinner so i followed Najihah back home.
She insisted i sleepover so i asked my dad and he surprisingly allowed.
Usually, he's abit uptight about sleeping over at a friends place.
Mum says he's in a generous mode as of late.
(Note : TAKE TOTAL ADVANTAGE (!)

Was funnnnn. Took alot of pictures with her webcam
I never slept over a friends house, you see.
All in all, what a way to celebrate the end of pmr, eh?

Let's see what tomorrow has in store