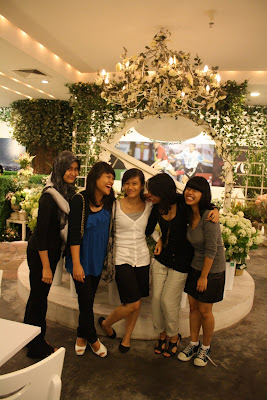 Ok, I'll update now.
It's 6 am and on a HOLIDAY, I'm already awake and not an ounce of tiredness. I can't sleep with this period pain of mine. Grr.
Ok, basically, after horrendous planning (sikit Tuesday, pastu Monday, pastu Tuesday, pastu Monday), WE FINALLY WENT OUT. Of course meeting Suraya was the highlight sebab dah lama sangat tak jumpa dia tu :') So, the 5 of us proceeded to eat at our usual place, Sushi Groove. And ordered the same ol' Rock & Roll, Popcorn Calamari and some others (tak tahu nama, order guna number dia tu je HAHA). We had so much fun updating each other on things. Everyone took their turn to talk and so all in all there were a lot of untold stories. Fun sangat ! The talk didn't simmer down even when the food arrived. Banyak sangat ah. Met up with Marc, Johann, Marwan and their friends and gave Jo his belated birthday present. WHICH HE PICKED EARLIER.
After spending a good 5 minutes on paying the bill, we headed out (only after asking the waiter for pictures which is like a main huge part in our freakin' routine) and walked around. Entered shops but I just had to painfully watch as Sarah bought things :'( ahahahaha, takpe. Duit bukan ada pun sekarang.
Lepas tu, Dina nak sangat ambik gambar dengan camera bapak dia so we hunted for a place to go and take pictures. After Zara, (this time around, killer shoes sial) Sarah took us downstairs, a place totally foreign to me since I go down through that escalator rarely. Went into that new Garden restaurant (ke GardenS?) and memang jakun gila la kan. It was such a pretty place. That made me happy. Took pictures with the flowers (DAH CAKAP, JAKUN GILA, it was so funny) and when we finally went in, the waiter (His name is Halim) was fun enough to take pictures of us sitting at the bench just outside of the restaurant. He was also hilarious with the remarks he had. Maybe, secretly he yearns to be a photographer sebab cara dia ambik gambar to enthusiastic gila. You know how you ask a waiter/passerby to take a picture, they just take one and you're not happy with it but for the sake of menjaga-ing perasaan you just say it's nice and take off ? Hahahaha, Halim ni, dia ambik dari semua angle la kan kalau boleh. Boleh lagi cakap, 'WOW!'. There some pictures with us laughing, tu memang betul betul punya gelak ok. Bukan konon candid. It was serious shit funny. (': Best la wei.
And then kan, bila nak masuk tu pun, ambik gambar lagi berderet. We sat in the little dainty hut (?) and made it like the world was ours. Gelak macam tak ingat dunia. It was so much fun and it has been awhile since we did all that so that made the day more memorable. After eating unnecessary dessert (tapi sebab dah suruh waiter ambik gambar berjuta, kena la kan makan sikit HEHE) and we picked some tarts and cakes. Sarah and Ila's drink sedap gila babi but I forgot what it's called. AGAIN, berborak lama gila. Suraya shared more detailed stories on her short but ongoing experience in her boarding school. There were parts that were so cool macam bendera naik sama dengan Malaysian flag tu and the dorm names yang cool gila baaaaaaabi punya cool. But the rules were too strict for my liking and ada some stories that Suraya shared that changed my mind completely. Took more pictures when leaving. Tengok tengok balik kan, macam family potrait je yang kat piano putih tu. Lawak tapi lawa :')
I was the first to go back, HOHUM. Best sangat la, rasa macam tak nak balik rumah HAHA.
Got back and uploaded (but failed) pictures and because the internet was so goddamned slow, I gave up. Papa FORCED me to eat when I was already full and seriously I have no idea why I just typed that out but whatever. Suraya came at 9 and about 10 minutes later, we left for Jan's.
Masuk masuk je rumah, dah paksa makan. I ate too much yesterday. Tapi takpe. CUTI.
After that, ambik lagi banyak gambar using the built in camera on my laptop and with banyak jenis camera hahaha
But I couldn't sleep because I just couldn't because of bad cramps. HEH. So I slept for just a bit and here I am.
AND IT'S 721 AM.
I'm going to Penang on Wednesday which saddens me because I'll only be back by Saturday and that's like basically the whole week ok :'( Nak keluaaaaaaaaaaaaaaaar.
Ok, bye.
P/s : Pictures of March 16th outings are at Facebook, takes up too much time if I were to upload it here. I love you, sweetiepies !
Written (technically typed) by Nadia Zainudin at 6:08 AM