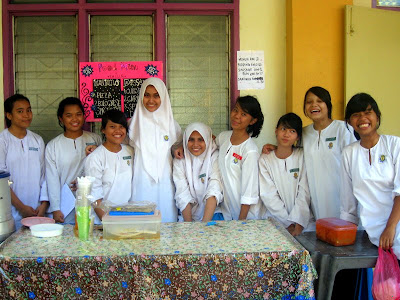 Ok, Form 4 dah start jadi fun
Day One of food selling. Actually had doubts about people coming because of it's very secluded location. But heyyyy, managed to sell off a lot (if not all!) and made money (Y)
There were running up the stairs with Dina because we forgot some puffs that were left in the microwave. -____- Tapi best, because FINALLY ada lah contributions to a school programme haha, in the wise words of Dina. Having said that, I don't mind being more involved in co-curricular activities because of my short experience with the KH Club has somewhat broaden my social skills (?) with people. It was fun talking to Nisa, Lilia and Balqis at the bengkel, haha cakap about PMR and Form 4 and the usual girl talk about the opposite gender (Hi Lilia ! hahahaha). I also proved myself wrong about some other girls, I ought to give a slap across my face. Heh.
Anyway
today was equally fun because there was the Robot making and Cooking competition amongst students. Farid won the cooking competition :') Cakap nak tapau, tak pun. HAHA xoxo
And the we were hectic as hell, Dina and I had to go out with Puan Nik Azizon to buy ice. Hahahahaha, jakun gila pergi kedai mamak macam budak ponteng sekolah.
And then we went back to school, continuing being hectic. It was fun though. I haven't stepped into class in like 2 days and it feels so long :o
Got to know some Form 2's (-.-) yang mintak borong minum, haha nasib good looking. (Y) Hahaha Aimi and Amy basically fought it out, verbally.
'Tu aku punya! Kau pergi amik lain'
'Apa pulak, tu I punya ok, dah lama chop!' (<- I just made that up but it was very very very similar to what I listened to anyways) Damn 14 year olds.
I didn't get to go and check the Bilik Seni exhibition though. Heard it was good.
WE also had our Yearbook photo taken which is and always will be a highlight of my year.
One of the perks of being a class monitor is that you get to sit infront as opposed to standing. That usually just makes me appear to be a shorty (as I already am, but who wants to enhance one's shortness?!). Informal photo, I have this feeling will be ugly as hell but whatever, it's part of the fun. Looking ugly.. and stuff. HUH ?
I also looked really red due to running under the hot sun calling people from my class to take a photo.
I LOVE, like I said earlier, YEARBOOK PHOTOG sessions. And I'm going to miss it like hell when high school will be dismissed next year for us :'( Tiba tiba je rasa cam ni, hahaha, before this, form 2 and 3, it wasn't anything significant (though informal time usually is crazy and fun) but when you're a fourth former, I guess you can kinda get how much you'll miss it seeing this will be the second last year for us to finishing high school. Lepas ni mana ada lagi gambar dalam baju sekolah ? Hahaha.
Continued with the KH stuff later but there was nothing much to do so I went to see the photosession and Farhana had to do go and practice for a sketch which I was supposed to be in but whatever, so she told me to do some stuffs and I did. Required me to stay til school ended. And I don't know why, but seeing this year's Form 5 punya photos and how they were around each other was just overwhelming. I mean, what ? They've been friends since they started school and probably even before that, zaman Backstreet Boys and all y'know. Hahaha, I have nothing to do with them but I don't know, I just felt sad/touched.
I'm not surprised if I get all teary next year after the photog session.
As much as I despise homework and assignments and everything associated to a dateline, I still love high school. I don't understand people who can't wait to get out.
Special thanks to those who helped !
Thank you for being so nice. It's been a while a gentleman stepped up.
Written (technically typed) by Nadia Zainudin at 5:35 PM