The Green Gang Is Back With A Bang (!) 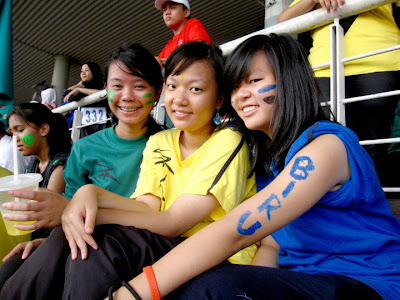 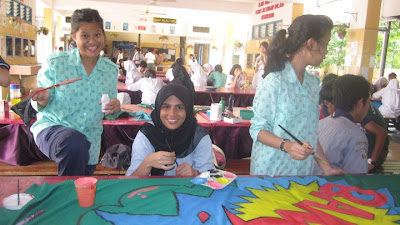 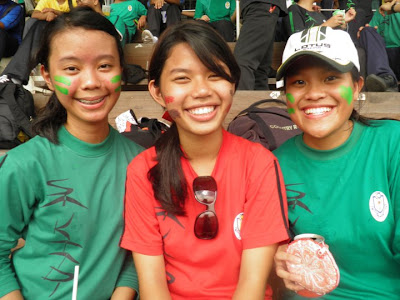 (Stole this pictures from Debra and Ila teehee, should have brought my camera BOOHOO)
We had our Annual Sports Day today. [This was a draft from god knows when]
And I can't ask for anything better than for my rumah sukan to win. AWESOME WAY TO END HIGH SCHOOL KAN :)))))))))))))))))))))
So I had to wake up real early, courtesy of Tania. I now see no point in activating my alarm clock because Tania comes in 5 minutes later anyway and wakes me up by opening my door and switching the light, making me blind in the process. Got out of the house a bit before 630 and was there when everyone in perbarisan was about to leave. It was such a nice feeling to see everyone there in their baju rumah sukan and all made up in the spirit of hari sukan. :')
Rumah Biru was very very impressive with their make up and detailed costumes. Sarah, Jei See, Karen, Nikki and I went to the stadium via Puan Hazlin though a part of me wanted to join in with my fellow green house members on the bus but oh well. Once there, I went to the tempat perbarisan and helped a bit with whatever was to be helped. Hah. Though rumah biru was obviously going to win for best banner and stuff, I wasn't really bothered because I was damn semangat rumah hijau. Hahahahahaha. Tak kisah lah lawa ke tak, I thought we were okay enough :') There was nothing we could do anyway. I STILL &HEARTS RUMAH HIJAU
I went up again in time to see people marching. And the usual ho hum singing and stuff. I bought face paint the day earlier so I painted some people's face and one by one started coming up to me requesting for the streaks I had on. Soon, a majority of them had their face paint on. Whoever got their face painted, I apologize for the obvious tan line you have now on your cheek hahahahahahaha ! Mine is quite obvious and I'm trying to figure out ways to even out my skin tone -.- ZZ Ah, it was worth it anyway.
The events started and I screamed my lungs out because I really wanted my rumah hijau to get them all. If I could be on the track and support, I would, but the teachers only allowed the participants to be on the track, boo :( But it's alright, I cheered all the way from the back. Such an awesome feeling lah k. Rumah Biru was (past tense k hehehehehehehahahaha) our biggest contender and Sanju was an ass hahahahaha some of the rumah biru and rumah kuning and rumah merah were over at rumah hijau punya tempat and there were all like BOO HIJAU. Er. Dude, where are you now ?!?!?!?!?!?! I love competition and I got very competitive though I didn't compete. Huh, wha- ? K.
It was so much fun but DAMN HOT LIKE ARE YOU KIDDING ME. You could fry a damn egg on the track. The scouts and KRS performed. Awwwwwwwwwww I GOT TO SEE HANIF AND HARIS DANCED TEEHEE Those boys get me all the time. The KRS danced to Hindustan and Malay songs and Hanif even did some shuffling WHICH WAS THE CUTEST THING ALIVE. Should've recorded the thing, especially when Hanif did that hand thing, I don't know lah how to describe but it was too cute. Hahaha.
Thennnn more events, and is it me or Rumah Biru has the best runners ? They always got first place -.- I was doubting first place for us though but whatever, we never know. Then, it was time for announcing the winners and we all had to be on the field, wtf panas nak mampus sial. Like, at one point, I was shivering because the heat was getting on to me. Announcing the winners was tense though I thought rumah Hijau did quite well. Rightfully, Biru won for Best Banner. And Rumah Hijau won for best perbarisan. And this year, they did it terbalik, by announcing first place rather than announcing the last place.
WE WONNNNNNNNNNNNNNNNN !!!!!!!!!! SO ALL RUMAH HIJAU WERE JUMPING FOR JOY AND SCREAMED AND I was so happy. Though I didn't contribute anything, sports wise, I was overwhelmed and so gila babi punya seronok.
I love sports day and I'm so glad it ended with Rumah Hijau winning :')
I can go on and on but I forgot o.o hahahahahaha
Written (technically typed) by Nadia Zainudin at 11:48 PM