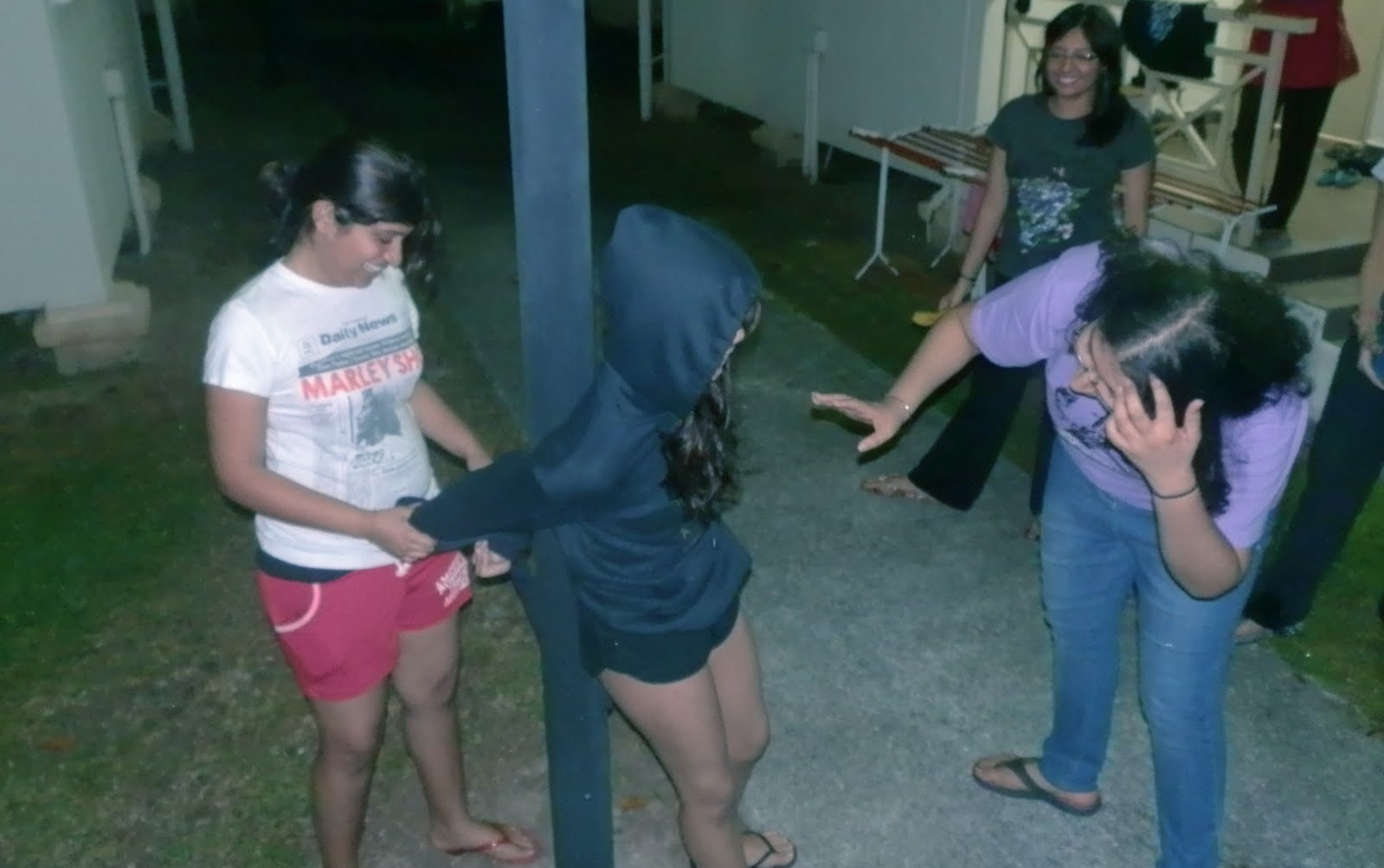 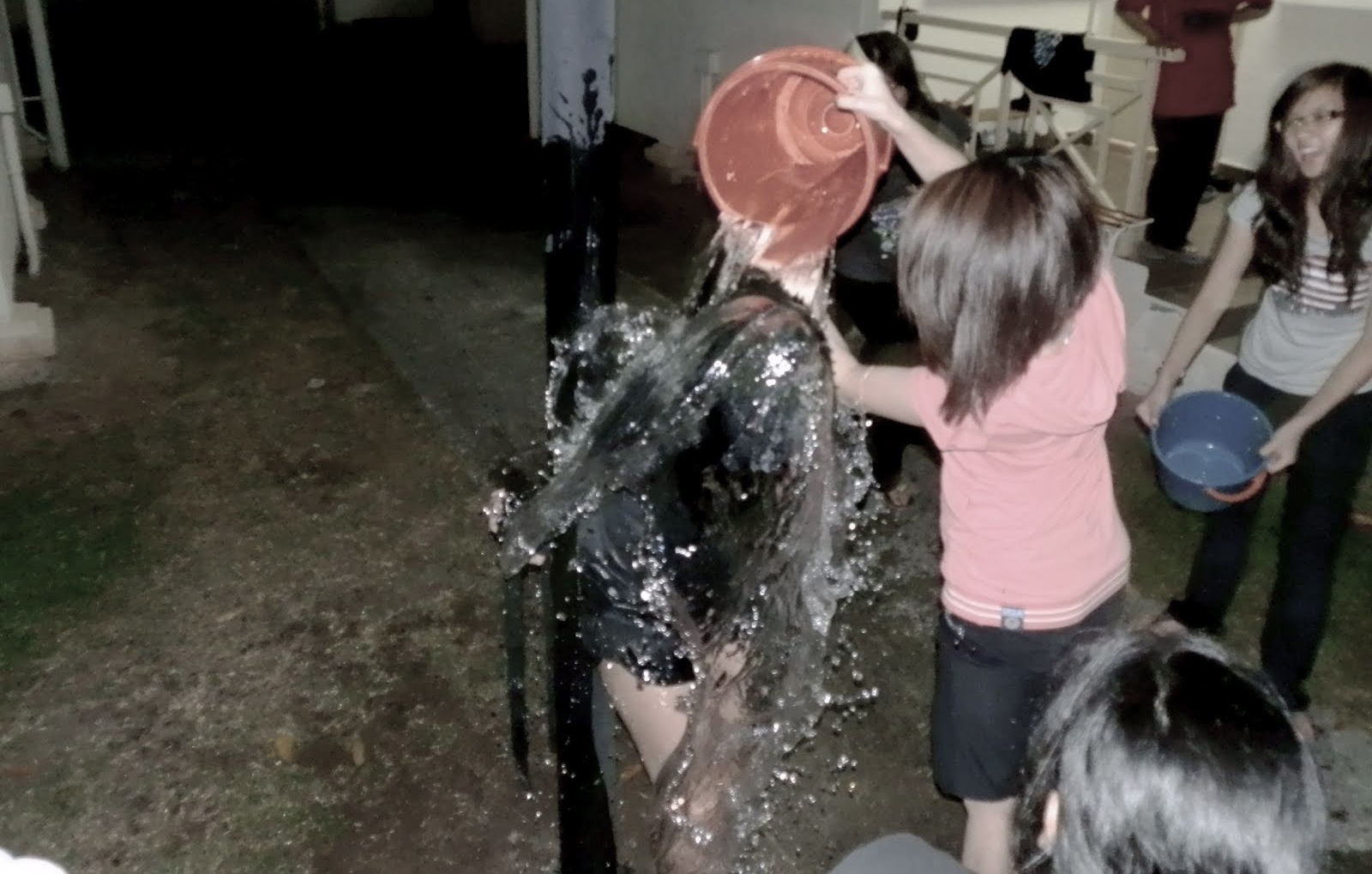 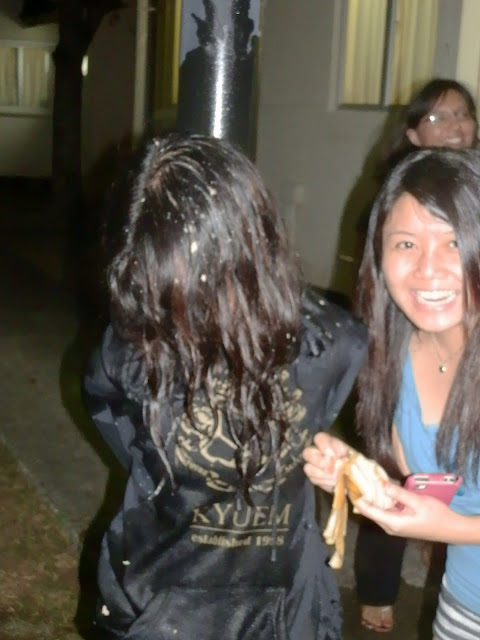 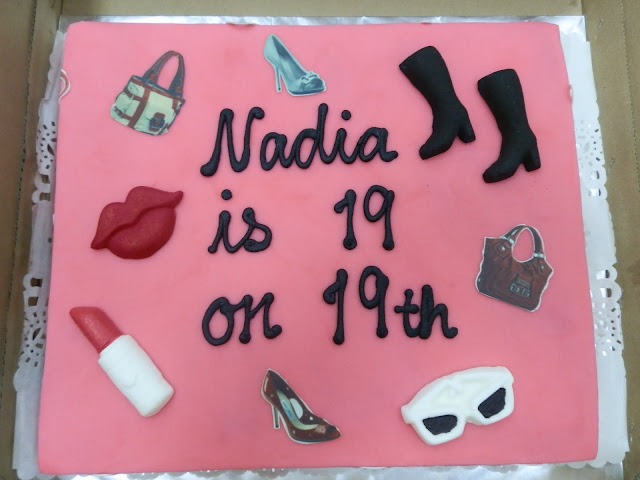 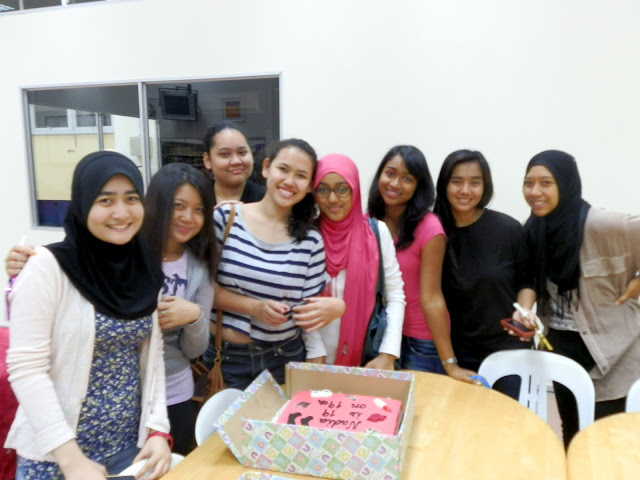 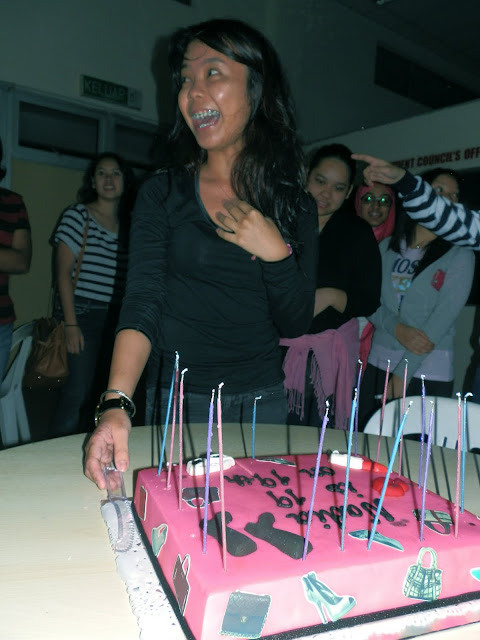 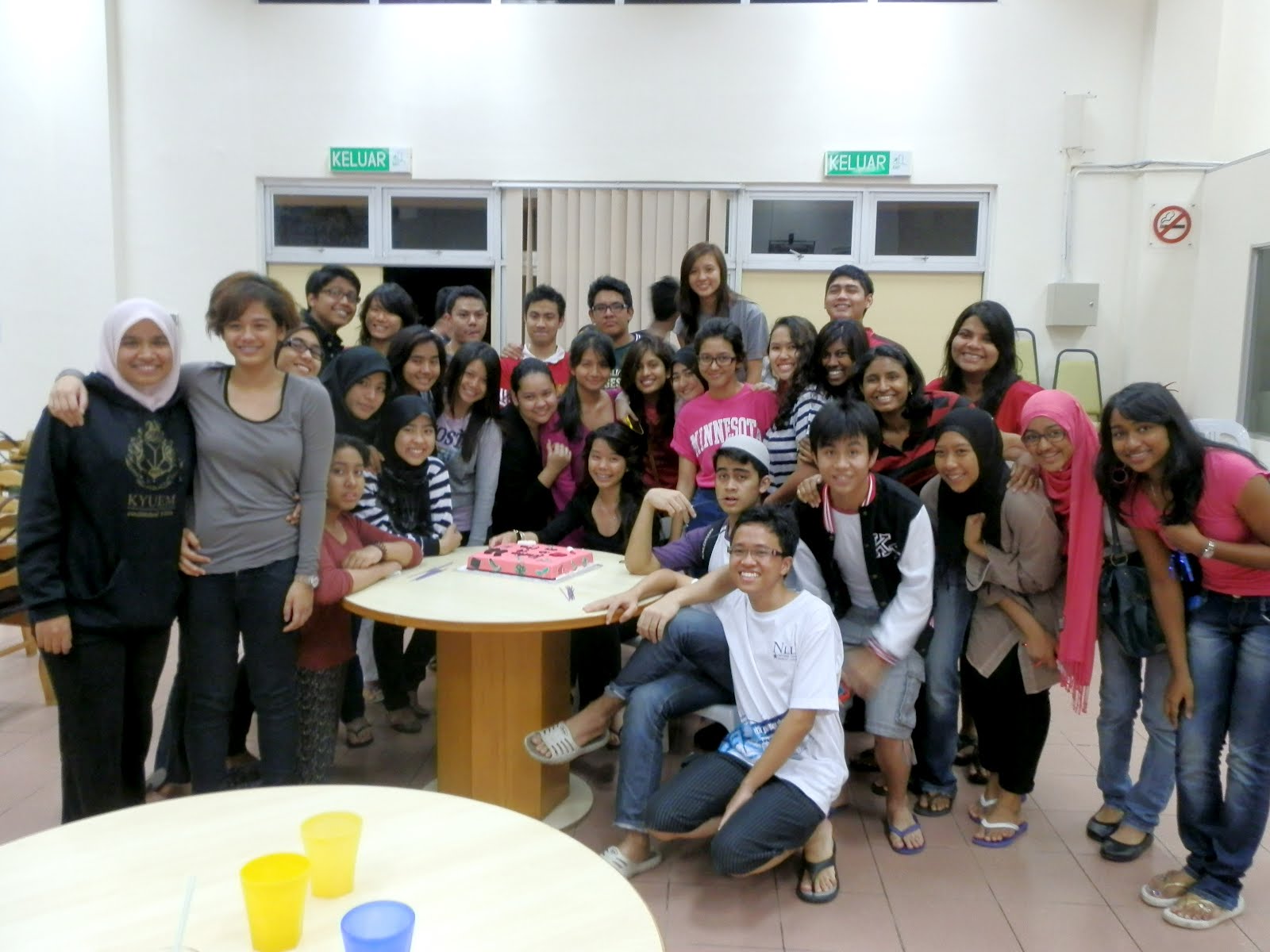 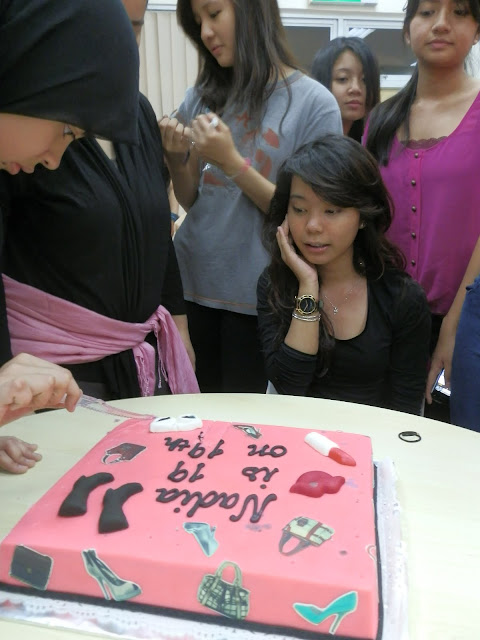 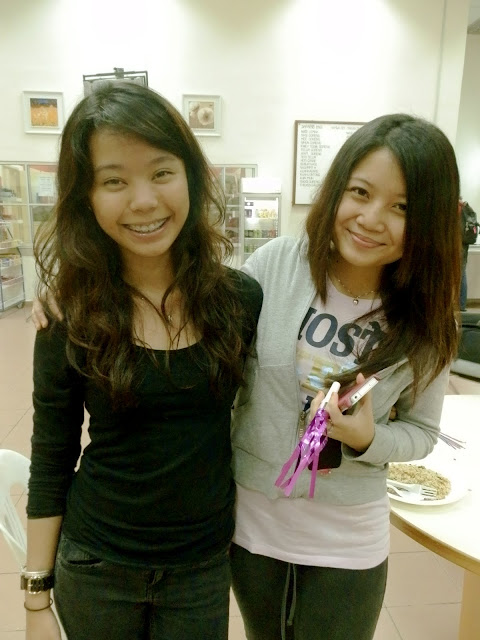 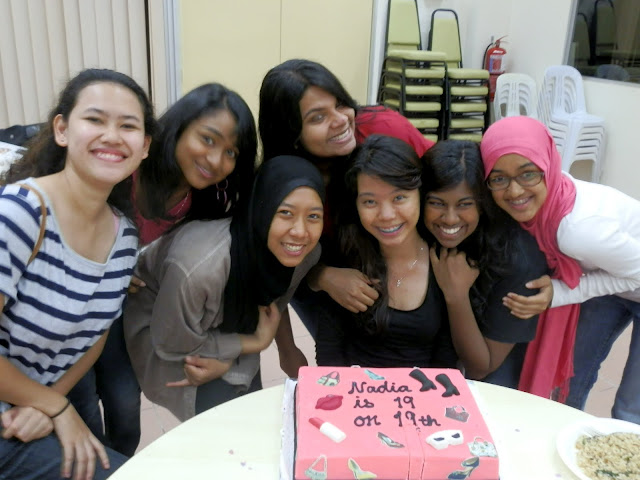 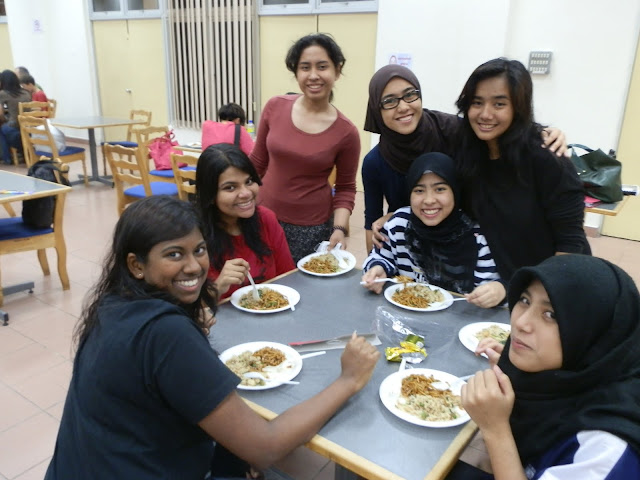 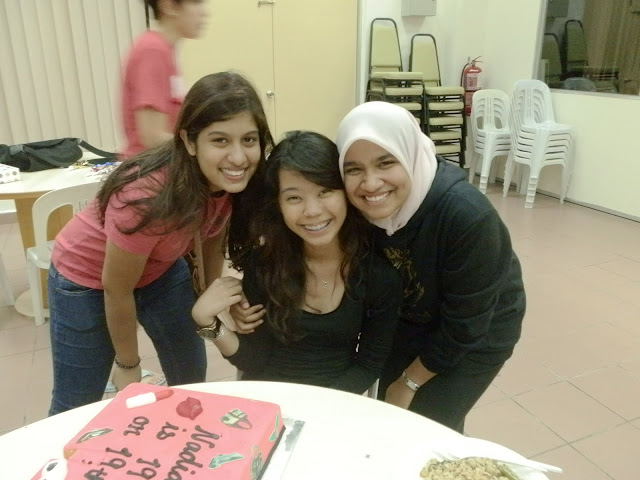 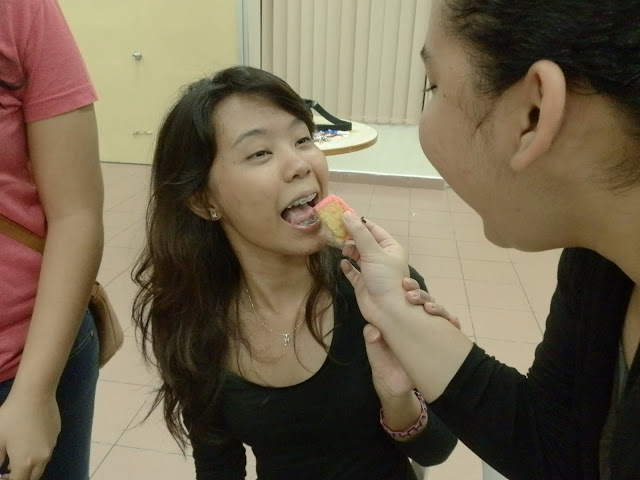 It's been 2 weeks since college started and I stayed over for the weekend and now I'm glad to be home !!!!!

Though I had a pretty amazing time in college because my birthday was last Thursday and omggg :"""") Let's try to see if I remember everything as it was

I was at Marissa's on the eve of my birthday just to lepak with her. And we got back to my chalet a little past 12 because she 'needed to see my Econs answers' and well, in a matter of seconds, I was 'captured' and tied to the pole and on the count of 3, I got buckets of water thrown at me and then the bananas came. Thanks ah doh Marissa, letakkan bananas up my top and Najihah for spreading it all over my face. Nasib baik banana.... I hope there wasn't any tuna because that would suck. And then Mun and Amal sang Love On Top because them being them knew that that was my favourite song of ALL TIME and they sang it, wrong lyrics and all ! Sooooooooooooo touched !!!!!!!! I LOVE MY FRIENDS !!!!! (Love On Top is playing now on my iTunes hoho)

Didn't manage to hug anyone though after that except for Kaveetha because they all made a run for it. Took a bathe and lathered myself with soap about 5 times so that it'll neutralise the banana smell. Why am I going on with bananas.

The next day (my real birthday) was just splendid ! Everyone was so nice to wish me along the hallways and they sang to me in the cafe and in the dining hall :"""""") KYUEM twitter wished me too ! LOL don't know why but that was quite exciting. So many people wished me, let it be on BBM, texting, by phone, by Facebook, by Twitter or face to face, I'm very very thankful and I appreciate each and every one of 'em. Thank you so much, people !!!! You know how to make a birthday girl feel happy and special !!!!! I was just a jolly ol' happy girl and I was about to get happier.

Was in the chalet doing my business and Kaveetha knocked on my door and told me to open because I have this habit of locking my door (mainly because I enjoy scaring Kaveetha and am quite afraid she'll retaliate lol) so I did and my Mama comes in with a box of doughnuts and my birthday presenttt and Tania with helium ballooooooooons !!!!!!!!!!!!!! I was so happy and was on the verge of crying because I had just BBM-ed Tania asking 'Why has no one called me to wish me yet :(' BESSSTTTTTTTT GILAKKKKKKKK hehehe they didn't stay for long because they had to fetch my sister from school so they left.

So when it was time for dinner, Diyana was like 'Marissa ajak pergi cafe k tonight' in which I was quite reluctant to go because I had intended to go the dining hall instead. Kaveetha had already left for the DH because she's on a 'diet' -.- Waited for Marissa to come and they were stalling me by being in Diyana's room and pretending to help Diyana blow dry her hair or whatever it was. And I was in my room, going 'Let's go girlssssss, it's already 8 o'clock!!!' and they continued delaying talking about trivial things like a book and a movie. Ultimately, desperate times called for desperate measures and Marissa declared and shrieked in horror that she got her period -____________- so that was 5 minutes in the toilet, thanks ah marissa. Hahahahahah luv you girls ! And when they were finally ready, I noticed that they were wearing pink and I was like, "Eh coincidence gila pakai pink, because it's my birthday isn't it?' haha and they laughed.

En route to cafe, I insisted on going to the dining hall because I wanted to give the doughnuts Mum brought over to the boys. Peaked in and nobody was there ! :(

I still had no clue.

Plopped my bag on to the chair and I saw half the cafe dim and I also saw my friends.

They sang me a Happy Birthday and throughout the song, my heart was just beating furiously due to the excitedness and due to the surprise. What was probably a big surprise was when Farhan and Olan and the boys and whoever I totally lupa dah, brought out a cake and it was the prettiest little thing !!!!! Recognized Cecilia's cake so I immediately knew it was all my mum's doing and I was just laughing and smiling and I was just amazed as to see my friends all there !!!!!! I immediately looked over to Diyana and Marissa who were smiling coyly. LOL !!!! Put 2 and 2 together and realised they were stalling me all along. I LOVE THEMMMMM !!!!!!!!!
AHHHHHHHHHHHHHHHHHHHHHH

I thought the surprise was that my mum and sister came to visit me but when they did all that, I was truly at loss for words. Just so touched, there was nothing like it !!!! AHHH :"""""")

To Kaveetha, Diyana and Marissa and everyone who made my 19th birthday in college the best one yet, thank you so much and I love you like none other. You people are a treasure and I can't wait to spend my whole freakin' lifetime with you lot.

Love youuuuuuuuuuuuuuuuuuuuuuuuuuuuuuuuuuuu and I love everybody !!!!!! This happiness and this joy in me is going to take a long time to get rid of so don't bother raining on my parade !!!!!!!!!!! :********* Hugs and birthday kisses from me to everyone who treated me like a princess (so cliche but so true lol k)

Newer Post Older Post Home
Subscribe to: Post Comments (Atom)
Hi!
Just a quick run down; I'm Nadia, 27 and I hail from the ever sunny Kuala Lumpur. I've been writing here since I was 14 so this blog has seen me grow from a high school kid to now a working adult and hopefully all the way 'til my older, greying days. I write randomly about all sorts of things - from sappy girly feelings to what I think about Hamilton the Musical (spoiler: it's fantastic).
Thanks for dropping by and for reading my random musings.
Great to have you here.
xx