Do ALL the homework! 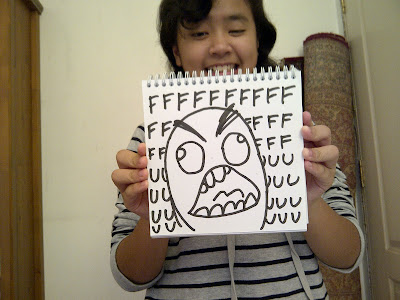 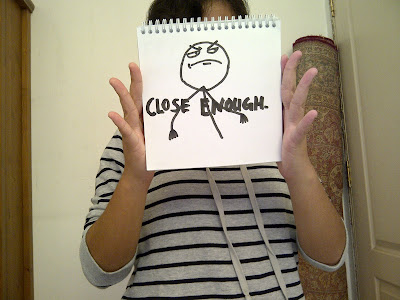 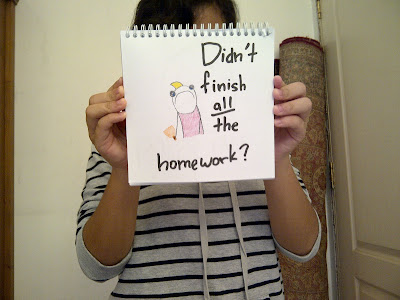 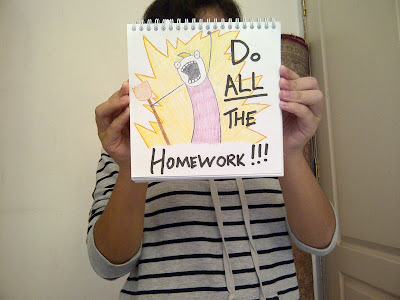 My sister drew this. What an obsessed 9gag fan. But I gotsta admit, they're quite good.
Did little math this evening before leaving for a trip to KL because Dad had to go on site to go ambik gambar for I have no idea what. So dropped by Kinokuniya and got my books. Dad called me before paying for his book
"So Nadia, my book is 193 ringgit. Cukup kan?" in which I replied
"Paaaaa, I want my 200 bucks voucher" and he laughed.
Got a book on Lincoln's essays and another two on Economics. Wanted to buy a Haruki Murakami novel but figured with exams coming up, I'm very VERY unlikely to absorb myself into a book anytime soon.
AND GUESS WHO I BUMPED INTO !?! She greeted me by tickling the back of my neck. Cuba kalau silap orang, kau nak reply apa Najihah ? 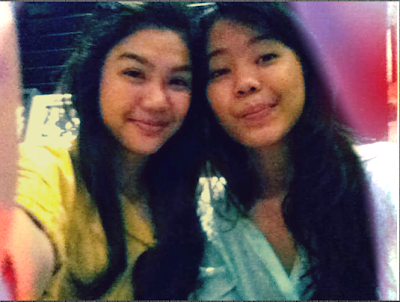 She was hungry for cakes so we got our butts into Ben's and devoured in chocolate cake and some apa crumble tah Najihah ordered. YUM. Mum called and I had to go :( Said our goodbyes and I left for home (asal emosi jak sentence aku ni).
Reached home only to leave about an hour later for Asia Cafe dekat Kota Damansara to 'watch' the game with Hatim, Olan, Farhan, Diyana, and Faiq (Farhan's brother who is the ultimate cutie pie). Dania and Kanda came later on. Of course I didn't watch the game due to my zilch knowledge in football so I chatted with Diyana and had my satay fix. YUM
Had a nice time laughing and playing the stupid games like how we would in KY -____- but all in all, twas a fun night. Diyana left before 12 and we just lingered around and headed upstairs because the boys wanted to play pool.
FAIQ IS THE CUTEST THING ALIIIIIIVE.
Ok dah bye night I'm feeling a bit nauseous from all the smoke and shisha up my face gah k see ya soon college todaaaaaaaaaaaaaaay
Oh chop. Speaking of college;
I know I've been (very) absent from my high school friends ever since college started last July and I have no one to blame but myself. I feel bad for having to decline every invite that comes my way but they're all to good and legit reasons, believe me so !!!! I sound like a broken record when I say I won't make it due to this and to that but it's all truth. I'm quite sorry for being pretty distant. College has kept me occupied and it doesn't help either when our holidays don't clash with one another :( So to Sarah, Suraya, Dina, Ila and Hafeez and everyone else, I'm sorry :( I'll make it up to you one fine day or many many many days in the future. But this semester is gonna be a hectic one since AS is in a couple of months so if any of you read this, I hope you understand that there's a solid and sound reason to all the 'Sorry babies!' or 'I want to but I can't' :( Please don't take it that I've been too busy with my KY friends, sumpah tak. They too don't see me outside of college. You lot will still be my best of friends even if I don't really show it as of now. I still love each and everyone of you and I sincerely hope you don't take it the wrong way when I don't go for outings. You have no idea just how much it means to me that you still make an effort to invite me :") I still love you girls very much so, the 6 ftw !!!!!!! Heh heh :")
K just had to go and blog that out.
Written (technically typed) by Nadia Zainudin at 1:52 AM