Ha Whatsapped me the other day and asked if I could be in charge of the Bangsawan costumes. I agreed.

After some complications, I decided to just rent out the costumes from Aron Nawi Creations and he was incredibly helpful though I thought I was being a pain in the neck for being extremely overbearing over e-mails, texts, and phone calls. But he was so nice about it so I'm glad :) Though the car ride to Sungai Besi and the carrying of 2 large bags and 2 plastic containers was exhausting, worth it ! Happy I could contribute to the Bangsawan production in one way or another. 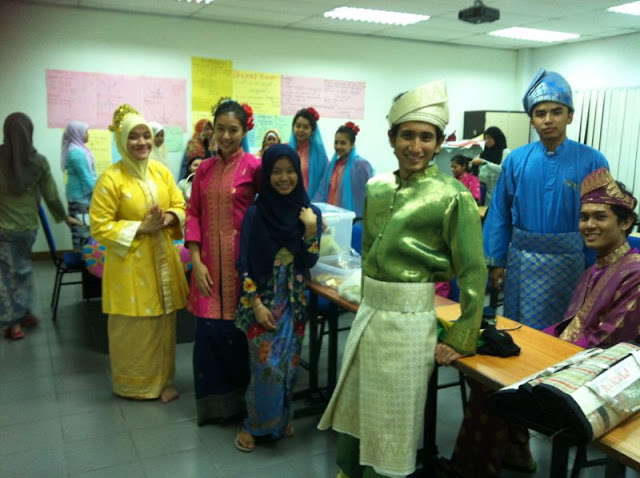 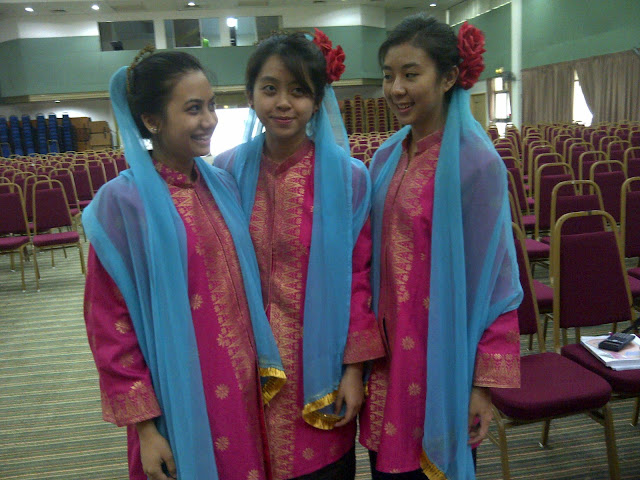 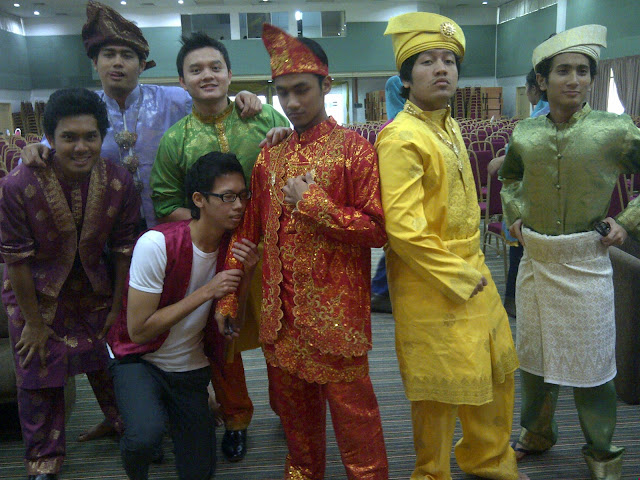 Bangsawan prep was tough because practice was at 530 everyday til 730 and then from 830 til 10-11. Even the minor of roles had to attend or else Ha would blow off her steam. First time tengok Ha so stressed out and so everyone tried to please her by coming to rehearsals everyday heh heh love you Ha. 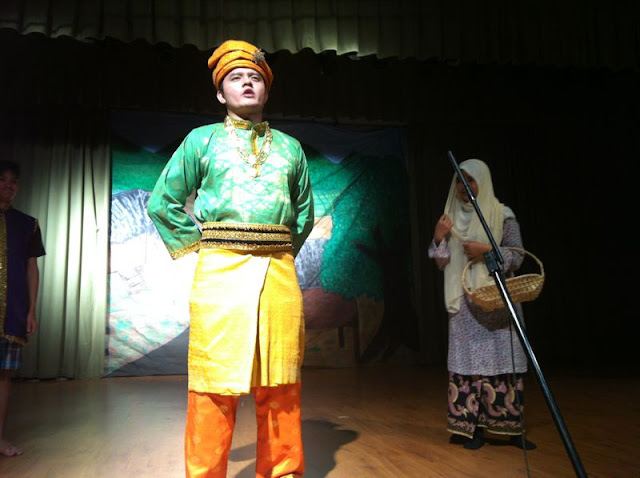 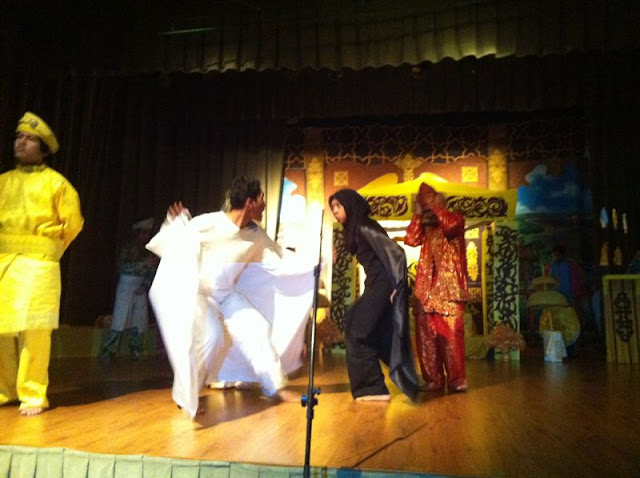 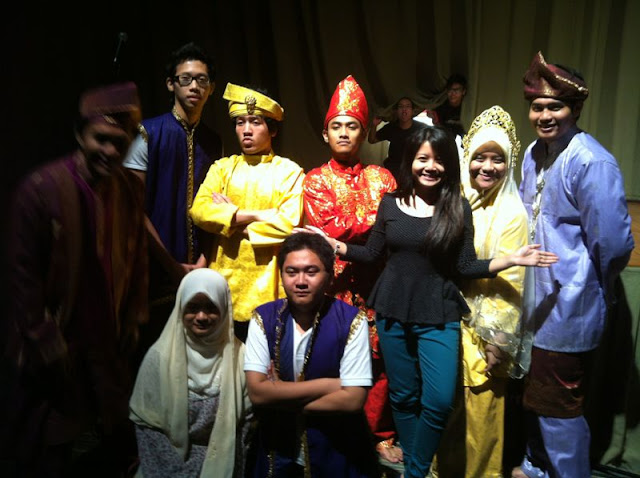 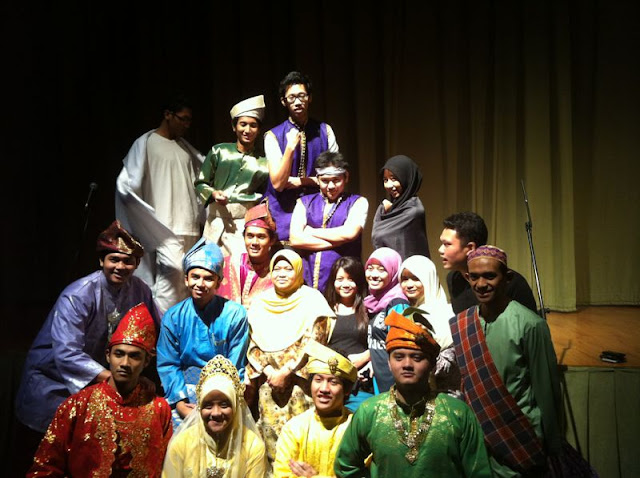 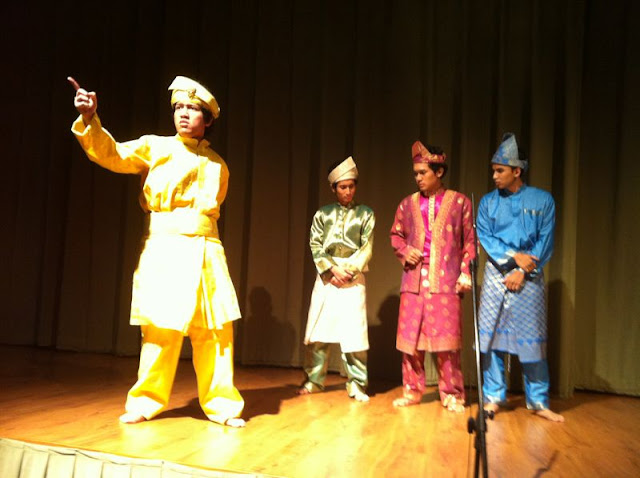 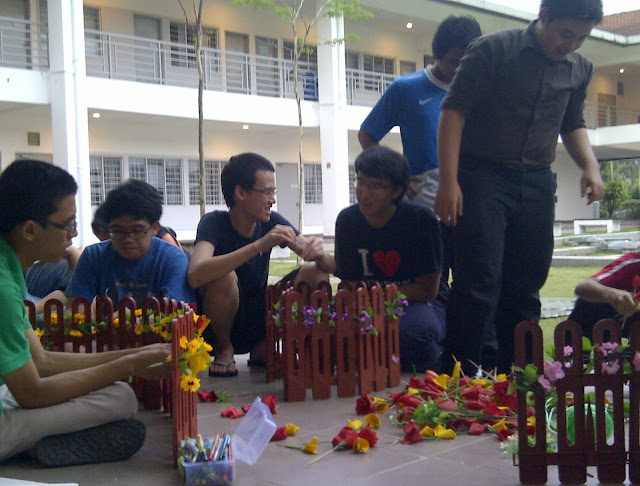 (Thanks Ha for the photos above!)

Full dressed rehearsal was stressful because we had to perform in front of Bonda and she's our toughest judge. By the end of our session, we all had to gather and she was quite nice and she and Mr Azman praised us for our acting though props could use a little touch up here and there. We basically, corrected what she told us to correct and hoped for the best.

We're third up, after Diamond and before Topaz. Our slot was supposed to be by 930 so we all had be at Acad 2 by 745. Nerves started to heighten as everyone got ready in the dark (yep, out of all night, Acad 2 had to be blacked out excluding one room on Bangsawan night!). 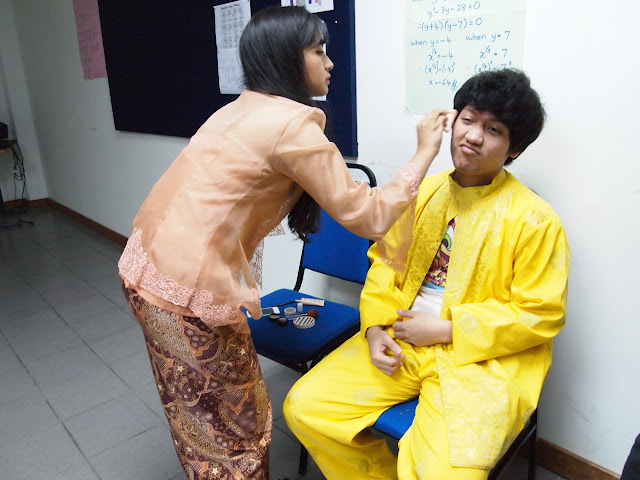 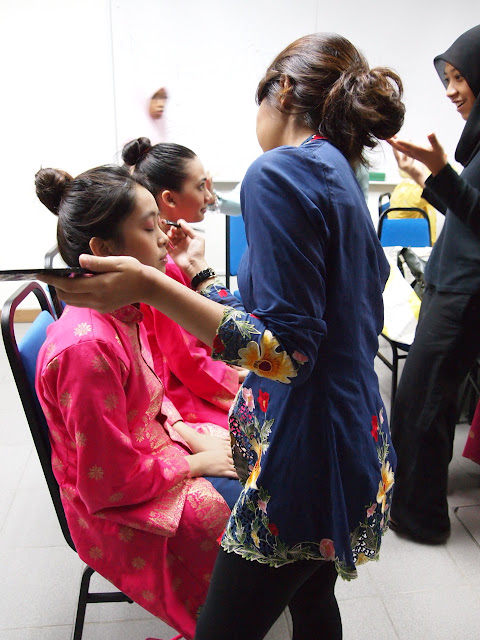 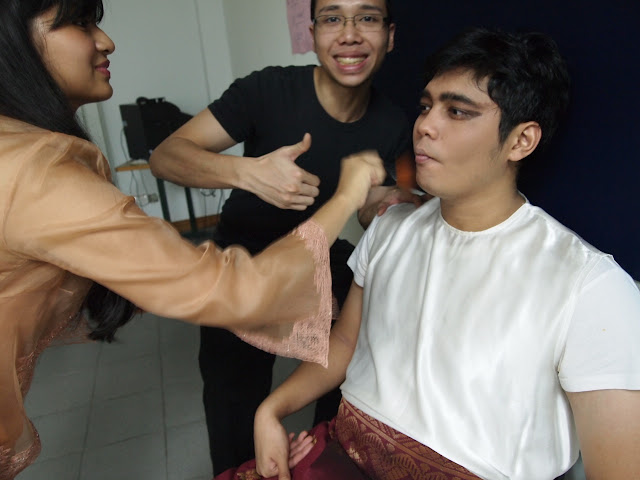 Diyana told Olan to suck in his cheeks so that she could apply bronzer on him. Too cute! 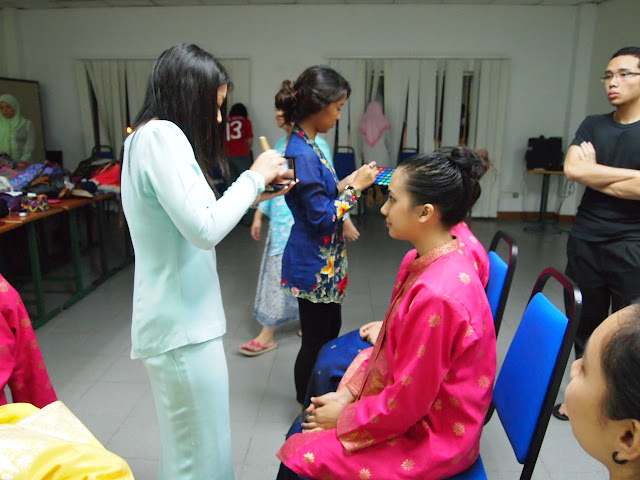 Can't recall exactly what time we had to be downstairs by the hall but everybody was a nervous wreck ! We just wanted it to be as smooth as possible. Before we got to go on stage, we had a sneak peek at Diamond's performance and from the looks of it, it was so good ! Their props were beautiful !!! And so grand !

Quite sad that we couldn't watch the earlier performances by Sapphire and Diamond because we had to get ready. Hoping that the RC produces a good quality video :( Funny how they have all this chunky big equipments but don't know heck when it comes to recording. Someone shove them a "How To Record Something On Stage" pamphlet !

Twas busy and hectic backstage. I think everyone was more nervous about the backdrop and the prop arrangements than they were for the actors acting !

Well, atleast I was. I had faith in the actors to pull off a great show but anything can happen with the props, right ?!?!?!

Moving on. Alhamdulillah. Things went well and everything went as smoothly as we had hoped for. Although the curtain was closed for a tad too long than we'd liked, the props went on as perfect as it could. Props to our props man, Ben and his Gang !!! The juniors outdid themselves by coming together and delegated the tasks like a pro they all are.

We had to rush away because Topaz was on our tails.

They too put up a great show. I especially loved Pipah and her dayang's part ! They were so cute and animated. It reminded me of those Beyonce-like ladies in Hercules who would sing all the time ! So comel.

Judges scurried out after Topaz had finished their show. Nerves settled in. Each house gathered according to their own. Garnet and Diamond on one side of the hall and Sapphire/Topaz on the other. Glad to see Ram and DZ make it to see us in action ! :")

The judges came in quite quickly after discussing. Which was quite surprising because they took FOREVER last year. I swear, I remembered we had so much free time after the last performance because the judges took a whole eternity to decide. 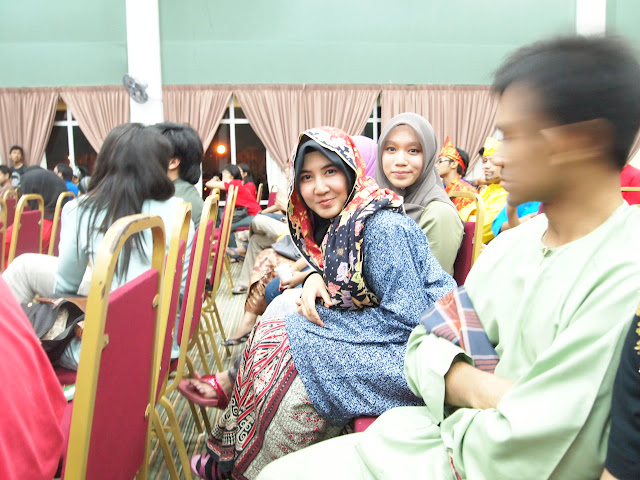 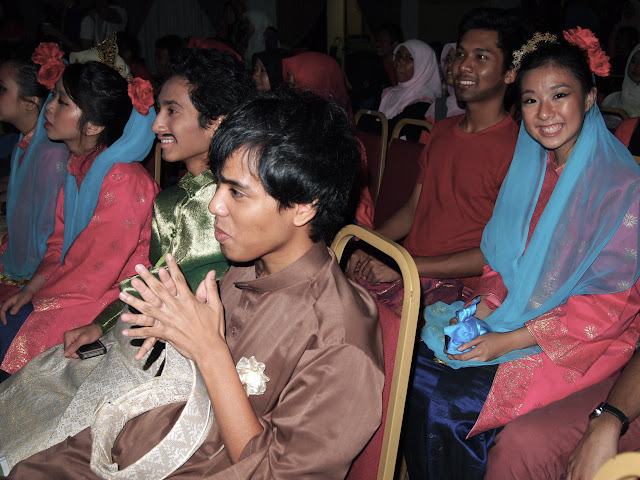 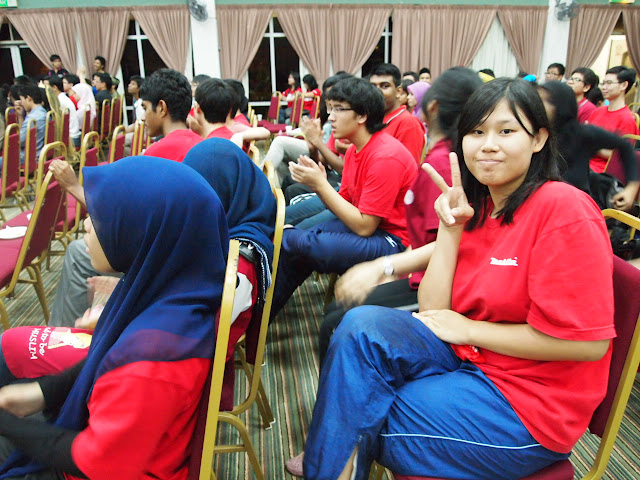 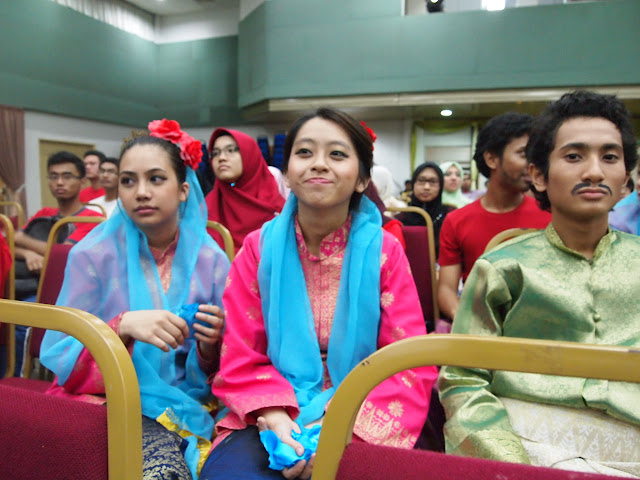 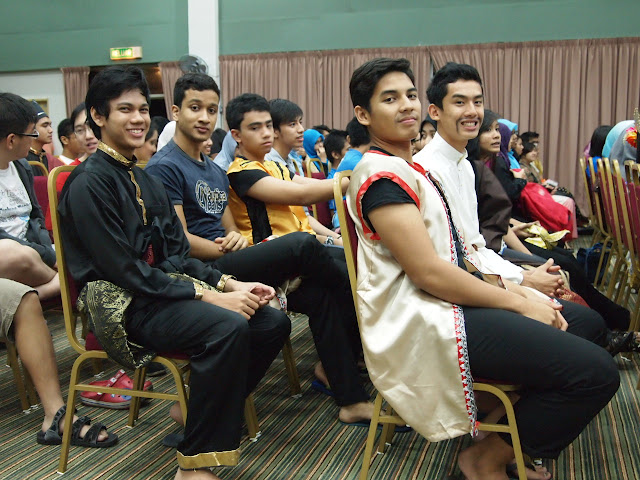 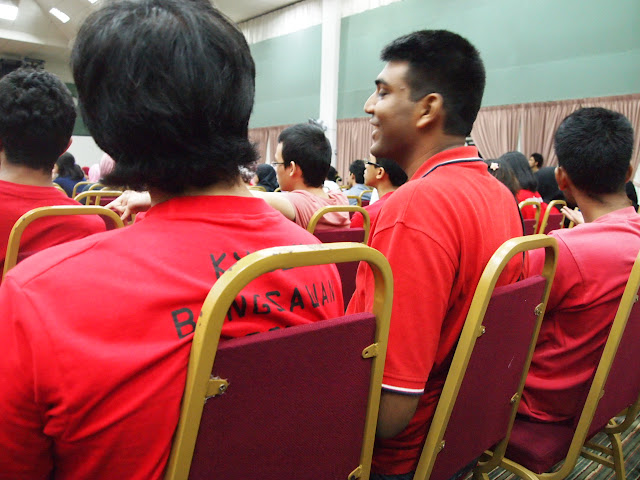 Ok, so maybe you can't tell the nerves from the photos but I swear everyone was shaking. I had to hold onto Amal ! Everyone was on the edge of their seats.. literally. I couldn't sit down in one place so I went around and took photos. But quickly sat down again when a judge took the mike and started to announce the winners.

Though I have to command him for commenting on the great hall and how it HAS to be upgraded by the college. Needless to say, that garnered him a lot of applause and love from the student body. Yes please, Mr Wilkinson.

... goes to Gar... net. That was exactly how he said it. We all couldn't really believe because let's be honest, our props did not come to par with everyone else's ! Surreal that we won !!!!!!! Nevertheless, we were all over the moon ! Garnet didn't win ANY award last year round so this was already a good start.

Can't remember what was next. But I'm just going to list who won what;

Best Antagonist : Nani from Diamond (she really deserved it because I saw a glimpse of her acting before going on stage and she really outdid herself. Such character! Her dressing was so apt too!)

LEZ GET TO BIZNESS

Best Actress : Our Queen, Diyanah !!!!!! SO proud !! She finally and successfully cried on stage ! Bravo!

Best Script goes to Garnet !!!!!!!!!!!!! Proud and super super excited for Ha, Aliah, Sherry and Bro who pulled long nights just to get the script right.

and the most awaited award is closing on us. Best Drama.

Before that, Amal whispered to me "It's going to be Topaz because if a house wins Best Director it means they won Best Drama too" in which I shh-ed her because WHO NEEDS TO HEAR THAT 10 SECONDS BEFORE WINNER IS ANNOUNCED ?!?!

They started with 4th place. And it's Diamond. Garnet is shocked to the core. Because we got word that the house to beat was Diamond. I wouldn't be all that surprised if they emerged as winners because last year kinda got them going. Had the best props around and best actors/actresses.

We all gave a standing ovation for Wahidah as she walked to the stage to receive her prize. Ha is such good friends with her so it's a conflict of interest because as much as we all want to win, we can't help but feel sad for your fellow director friend. I'm telling you, it's much easier if Bangsawan was an event battling against other colleges !!!! We wouldn't have to feel bipolar so much, sikit sikit sedih sebab tak menang but at the same time happy for our friend who got the award.

3rd place goes to Sapphire. Can't really say much because I didn't get to see their performance but I'm looking forward to watching the video because everyone's been saying Sarah and Irfan were such good lead actors.

First, the judge wanted to announce first place. But then he contemplates and says that he'll announce the 2nd place first. Which is pretty much the same thing lah kan.

and all I can remember was screaming and jumping and hugging and more screaming. I had to momentarily calm myself and get my camera to take a photo. I was thisclose to recording our reactions but then they'd be a bit obnoxious because it'd be like we were anticipating a win. But god, I wished I did! 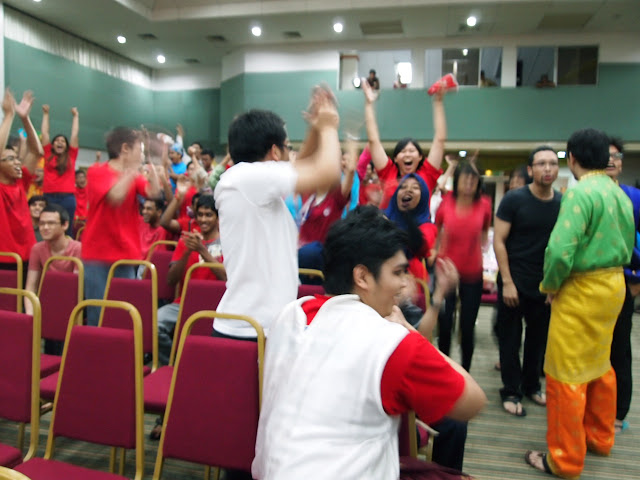 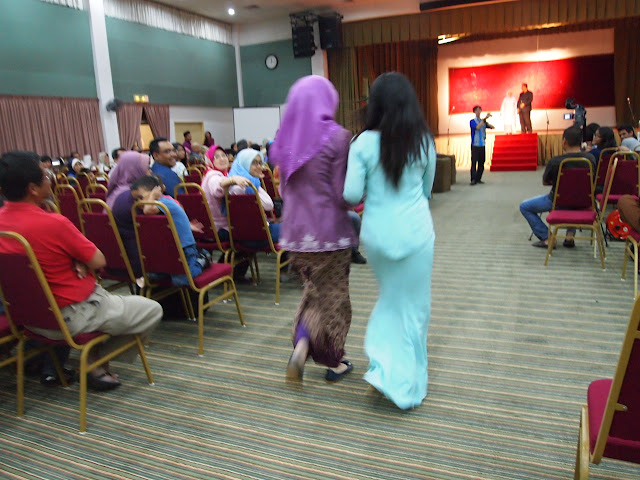 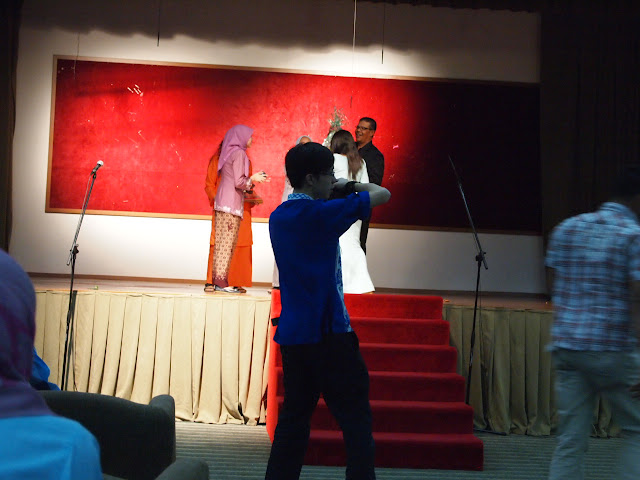 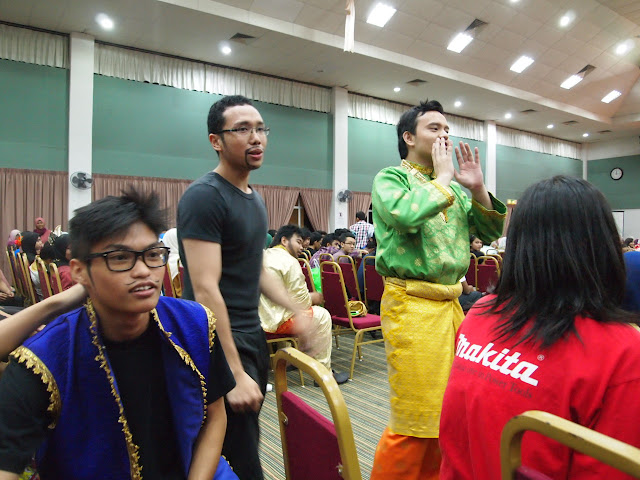 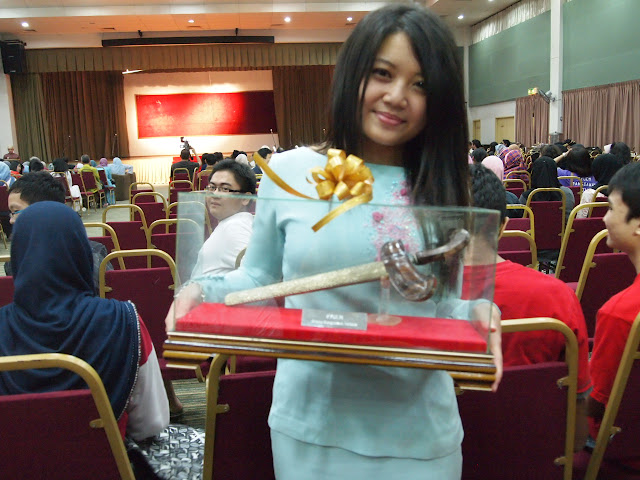 We were freaking over the freaking moon. So proud of Ha and her fellow directors and every thing she did for us was so worth it !!!!

But ultimately CONGRATULATIONS GARNET AND HA FOR WINNING BEST DRAMA !!!! 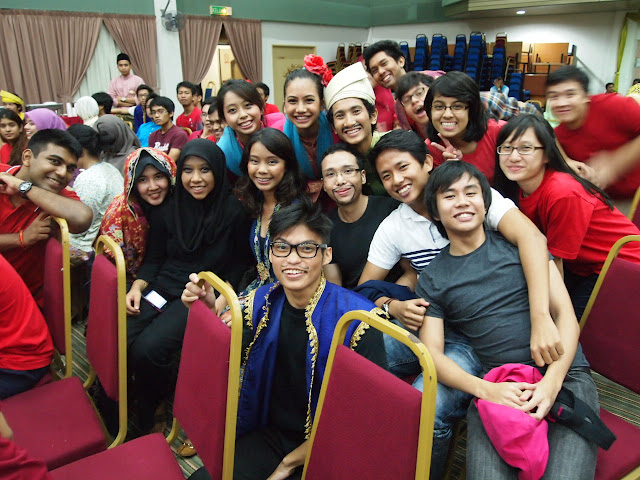 Love my Garnet members forever and ever and so proud of our win ! May we always be humble about everything we do and always help the other houses because at the end of the day, we leave KY as one community, not 4. 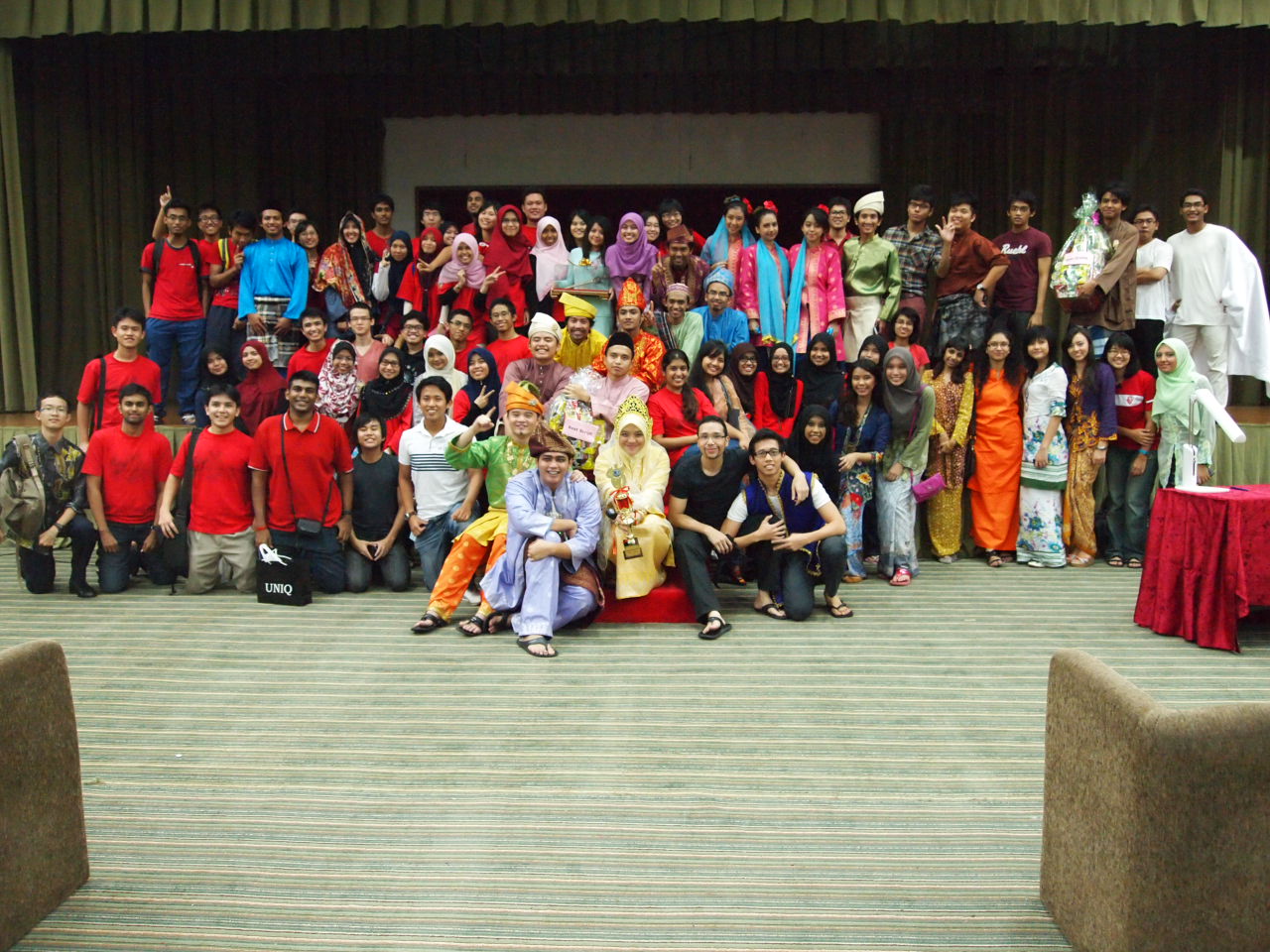