I think it's well known to my family and friends and whoever follows me on Twitter/reads this blog that I'm pretty obsessed with Suits. My mum calls it unhealthy obsession. I call it being a fan of this crazy good show. It's this new legal drama with only 2 baby seasons out (when I mean 'baby', I mean 12-16 episodes per season!) but I absolutely love it. I have to thank Olan for introducing it to me in the first place. So, thanks Olan.

So I was in the midst of going to the dining hall to have my lunch when I scrolled down my Twitter timeline to see a tweet by Patrick Adams who plays Mike Ross (the degree-less lawyer but brilliant all the more BECAUSE he's degree-less) saying he was coming down to Singapore, Malaysia and Manila. I didn't even bother to read the rest of the tweet because I was thisclose to screaming and letting loose the ugly fan girl side of me (though it's been let loose every Friday when a new episode is released).

This was last Monday and he and his lovely actress girlfriend Troian of Pretty Little Liars fame were said to arrive KL on that Friday.

And out of all weekends, I chose to not come back that weekend to 'study'. And also because we had just got back from a week's worth of home so I thought I'd toughen it out and stay the long weekend in college. Right.

So ok. He arrived Friday. And I was in Lembah Beringin. Alone in my chalet as all of my chaletmates had gone back home. He had posted photos up on his Instagram (@halfadams), photos of KL and I was sooooo upset because this is my favourite actor from my FAVOURITE TV SHOW we're talking about !!!!!!! And he's in my hometown when I am not !?!?!?!!?

I made peace with it... eventually. Didn't last long though. By night time, they were at BSC and guess where my family decided to have dinner at ?!?!?!?!

But they didn't get to see him because there was this big-ish event for him so he was surrounded by agents and sorts.

I cried. Legit cried my little peepers off!!!! I couldn't believe it that I was sobbing because I wasn't home.

The next day, the first thing I did was go on Twitter and I came across some girls twitter and she had posted a photo with Patrick and Troian at their hotel. Something in me (read: fumes and fires of jealousy) fueled me up and said

"You know what, you should atleast try"

and so I dialed Kanda's number and asked

(Thanks Kanda for not being difficult)

Decided to not tell anyone back home of my sudden change of plans to come home as they had might persuaded me not to. I was half regretting it myself while I was on the train because being the pessimist that I am, I thought that the chances of me meeting Patrick was zero.

Took the train to Rawang, got on another cab to my place and picked Tania up to go KLCC (because @xandriamorden, this lovely lovely girl whom I personally don't know and haven't met, was kind enough to inform me on Twitter that Patrick was in KLCC) and I half justified myself going to KLCC by saying "If all fails, I have 250 bucks worth of book vouchers to spend in Kinokuniya right?) (no).

Searched high and low but to no avail. Decided to leave for home after an early dinner at Ben's where I met Diy (who thinks I shouldn't blog about everything) (h8rs gon h8, gurl).


With revived enthusiasm, I woke up at 7:30 the next day (for someone who finds waking up at 11 as normal, a 7:30 alarm clock is really REALLY something) and woke Iman up because she was my teman for the day and left the hotel by 9, reaching KL Hilton by 9:30.

This is what we did.

Had expensive drinks for breakfast to look like we 'belong'.
Had many trips to the fancy looking washrooms of Le Meridien.
Walked to KL Sentral to have a quick bite at KFC.
Walked around KL Sentral somemore because as boring as it was, it was hella better than bumming around in a hotel.
Went back to Hilton. Had a croissant. Again, to make it look like we 'belong'.
Sat on several chairs around the hotel as I kept refreshing my Twitter to see if anyone had tweeted about the two.
Went up and down the lift.

Went to KLCC to get proper lunch and as we were looking for a parking spot, Iman read a tweet of Patrick thanking someone for something and she said

"I think we should go back to the hotel"

So we did. We left KLCC and headed back, only this time we parked at KL Sentral.

Tired and frustrated but strangely with a more unwavering feeling, we walked to KL Hilton and the door guy asked

He saw me before while I was munching on my croissant and aimlessly walking around like a fool.

"Um.. ada tak celebrities leaving this hotel? Have they left?"

"Celebrities?" he asked back, before asking the driver outside.

This sweet old Chinese man came up to me and Iman

"You stay here, they will be coming down in 5-10 minutes time"

So, I tried masking my excitement by chilling outside by their car but Iman stayed near the entrance to see if they were down yet. The next thing I know, the door man and the driver gestured Iman

"Dik dik, they're here!" and Iman just turned around to them and turned to me

A quick glimpse of them and I nearly freaked out when I saw these 2 tall actors in the hotel lobby posing for a photo for the other fans with them. I. FREAKING. FREAKED.
But in the midst of my freaking-out-ness, I managed to whip out my camera and headed straight into the hotel.

I was bombarded with feelings of sheer excitement and sheer relief because I had just spent 4 and a half hours circling around the hotel area waiting for this tall Canadian born actor whom I absolutely adore and I couldn't believe that he was right in front of me.

"Hey there! Come on over!" signaling us to come nearer and I nervously asked if I could take a photo with him and he of course said yes. 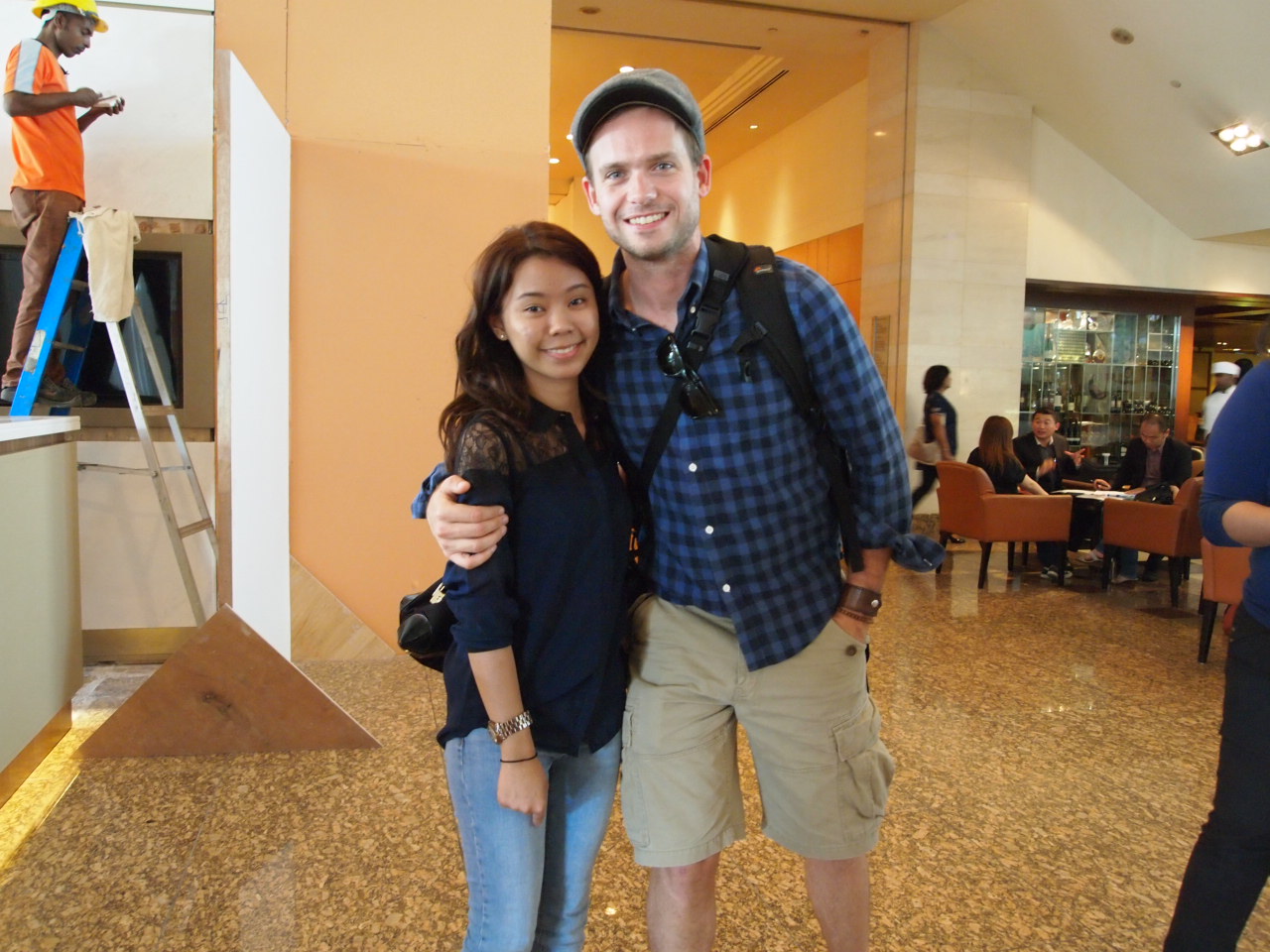 Having this photo printed, framed and plastered up my wall. Can't believe this still!!!!!!! 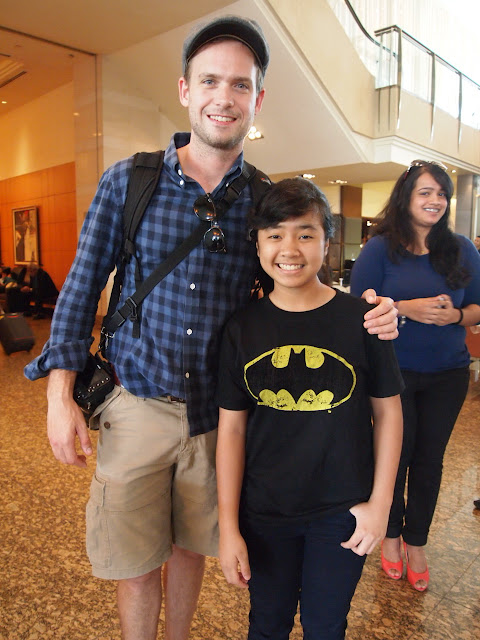 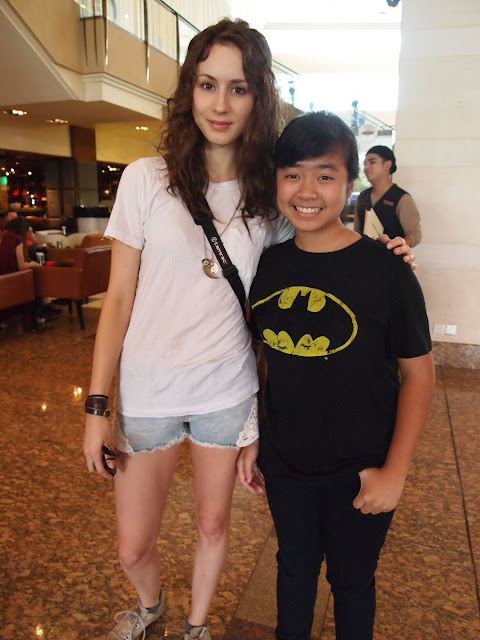 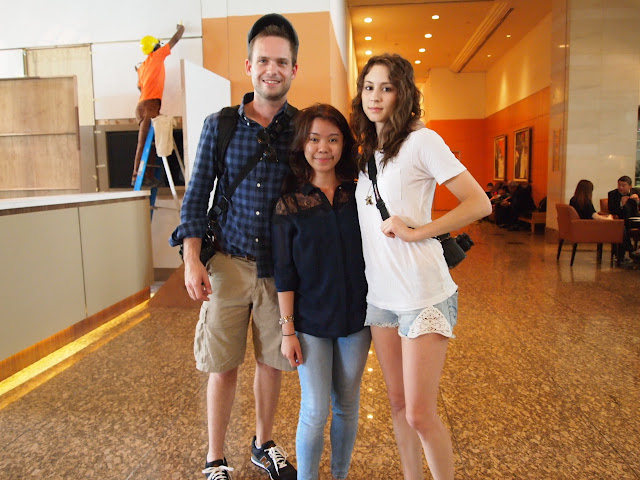 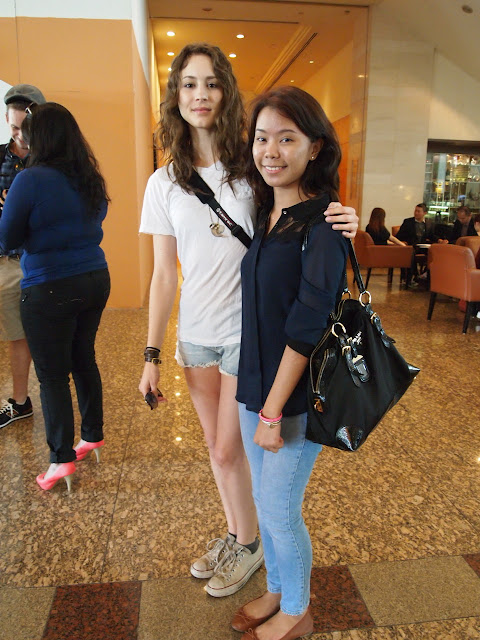 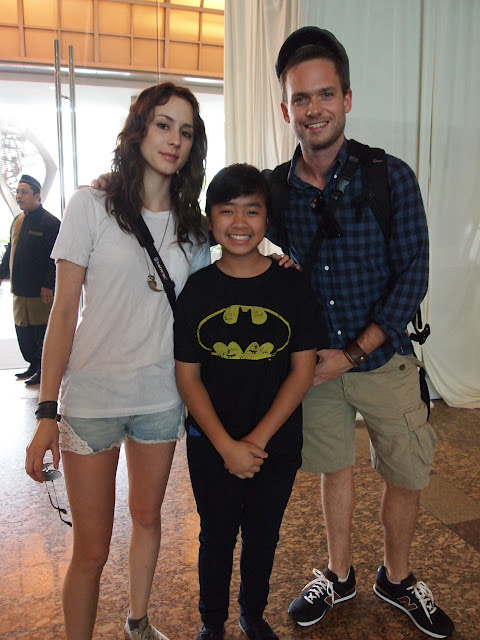 I asked things like how was the food, and the durian they tasted the day before and if they were going sightseeing and I even told them of my ordeal hahahaha Patrick said "Wow, that's so cool! Sorry for coming down so late!"

It's okay beb, I'd wait for ya rain or shine!

As we said our byes, we walked away and they walked to their car and Iman and I just looked at each other and said

Coming close to losing our battle to resist screams and shouts of thrill in the lobby of KL Hilton, we rushed to the car and headed home.

Guys.
I can finally say I met Mike Ross. I'm so happy you don't even know the half of it.


(Thanks Iman for being the best partner in crime (crime: stalking) and for being extremely patient with my uncertainness and for saying "I think we should go back to the hotel" when I really wanted to go back home and settle in my nest of frustration and disappointment. Thank you, my baby sister. I owe you one.)
Written (technically typed) by Nadia Zainudin at 1:05 AM