We dedicated this day to touring around Gangnam. Yes, that Gangnam. The Psy Gangnam. Gangnam is the district to shop if you're one of the rich and famous. We walked along Apgujeong Rodeo where you'd find your friendly ol' plastic surgery office after every 5 designer stores. We also came across the hair salon where Girls Generation would do their hair and make-up. Pretty surreal, guys!!!!!

Anyway, so the reason we made Day 6 all 'bout Gangnam because we wanted to be close to SM Town. What happened was, after leaving SM Town on our first trip there, Tania forgot to get something from the gift shop so we actually went back to SM Town after having late lunch at the Italian place just downstairs.

As she was paying for her things at the cashier, some of the employees were setting up this banner just next to it, about SHINee's new album. Tania looked and didn't think of it much because by then, the album has not yet been released. It was due to release on the 3rd of August. And she knew this because I had mentioned it to her earlier. What caught her eye was the date '5th of August'. She came out of the store and called me in to ask when the album was going to release. As I confirmed the 3rd of August, we both got a tiny weeny bit excited "... so if the album is releasing on the 3rd... what's on the 5th... ?" and she asked one of the employees to which she responded "fan signing upstairs".

Quite difficult to stay calm and composed knowing that SHINee will be just upstairs in a few days time. So we decided to come then on the 5th, but I kinda knew it would be difficult to get admission for the fan signing event. Regardless, we both still wanted to come to SM Town again. Thus, our trip to Gangnam!

So, first! We went to Gangnam but somehow, stopped at the wrong subway station and so we had to walk quite far to get to the tour bus stop. I persevered but survived only by complaining hahahaha I really really cannot stand heat, it's been like that always, I don't mean to be mengada or anything like that, I just really dislike heat, it's very suffocating and rimas for me. I pitied Tania who had to endure not just the heat but my complaining and whining but I mean, she's stuck with me for the rest of our lives anyway hahah

We had to go find the Gangnam Tourist Center which is where the kind lady told us of the tour options. The bus was leaving only an hour later so Tania and I had to go find lunch first. Damn. Susah. Nak. Cari. Makan. In the end we settled for a boring shrimp burger at McDonalds.

The lady at the counter couldn't understand my "Shrimp burger, please" and she was looking so confused 'til I altered my pronunciation to "She-rim bo-go, ju-se-yo!".

After eating and taking advantage of the cool a/c in McD, we headed out to the bus. Thank God the bus was also nice and comfortable with air-conditioner! We were the only ones aboard though, seeing how it was a weekday and it's not school holidays so tourist count is very low despite it being summer. The tour guide was an old man but he could speak English well and he showed us all the landmarks and bits of history about it which I genuinely found very interesting. Seeing how we were the only ones there, we could ask him questions personally. It felt like being on a private tour! 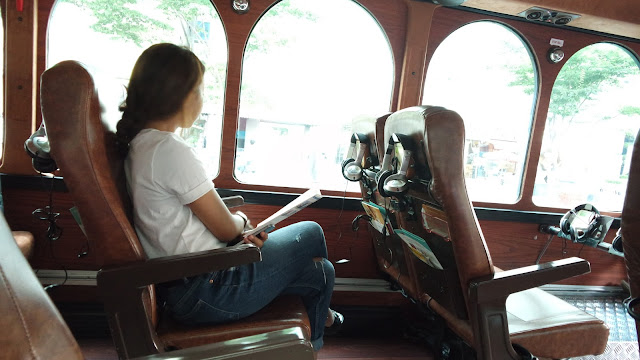 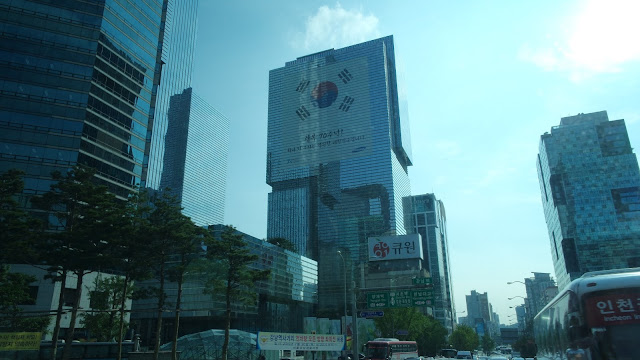 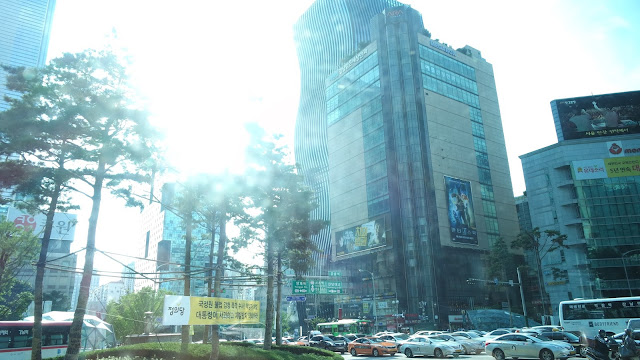 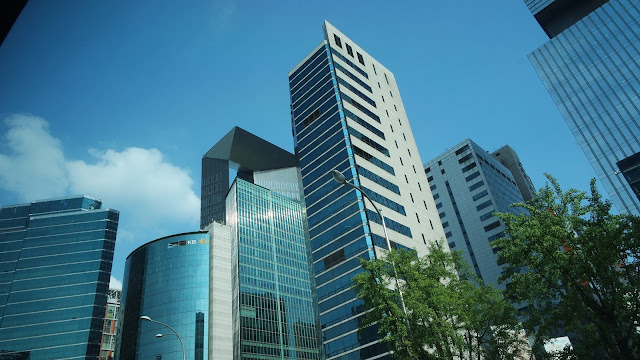 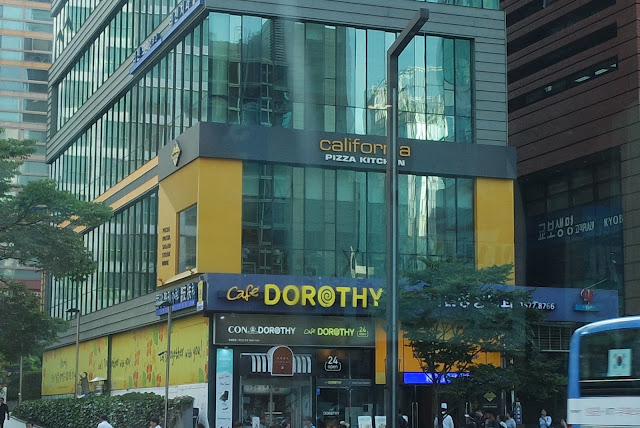 Hahaha I took this photo 'cause of CPK as it's a big family favourite for us. I remember going there EVERY Friday all the way in KLCC. Pity they've closed down, they had quality Italian food! 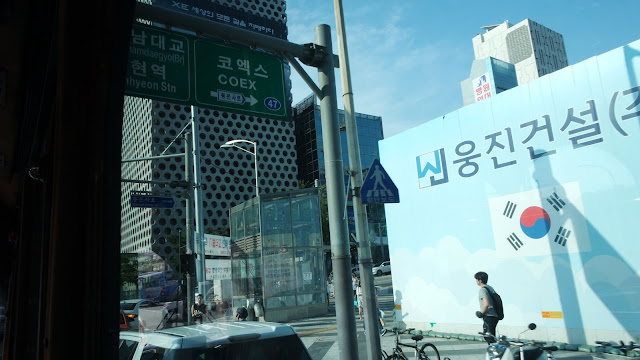 We finished both tour lines in about an hour and and 45 minutes, if I'm not mistaken. This one is not bad compared to the previous tour bus we took. This one at least we learned something and not completely in a daze hahaha

We then walked to Garosu-gil, another street of shopping. You can find A Land here and lots of skincare shops that you won't otherwise find in Myeongdong or Hongdae. There's also a 3CE standalone store. The whole street exuded such a cool vibe and I kinda regret not going there earlier  on the trip to spend more time there. There were so many pretty café's along the street too! 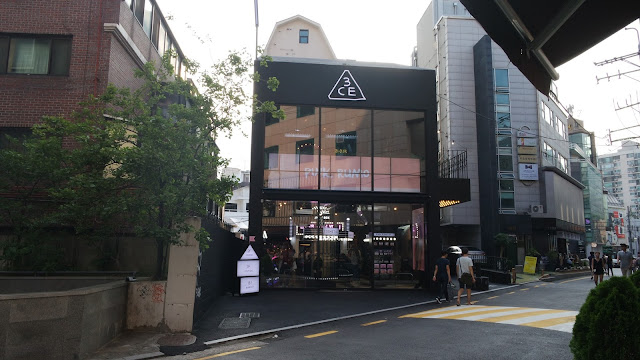 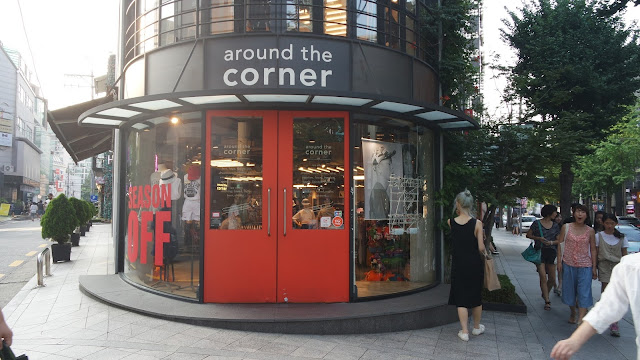 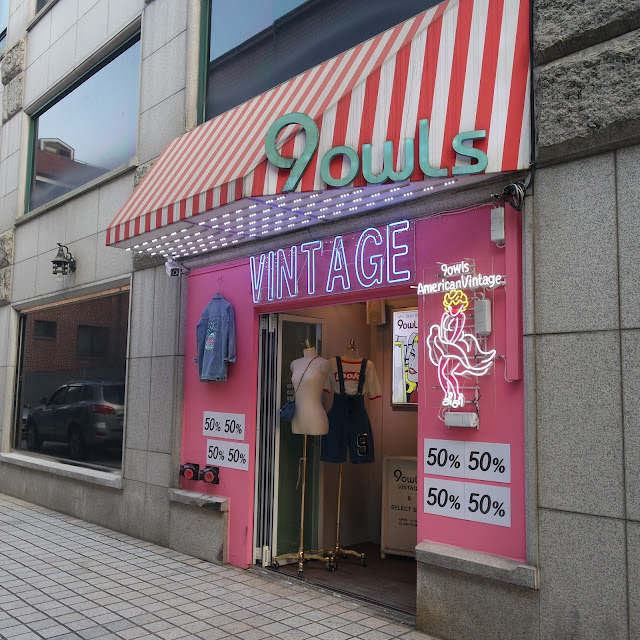 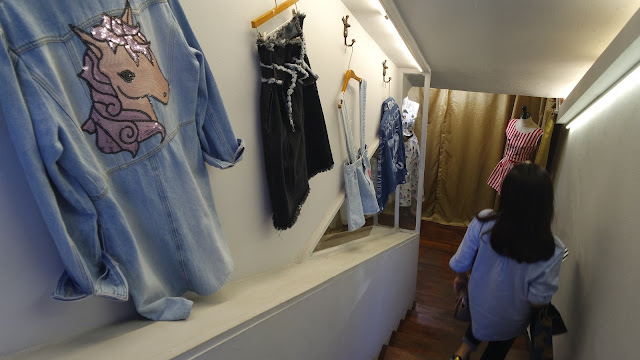 For some odd reason, we didn't take much photos whilst in Garosu-gil. Like I said, I wished I'd spend a longer time browsing through the shops. It's just a small street but really cool shops like the vintage one (above). Apparently it's where SHINee's stylists got their clothes for their Married to the Music photos (below). 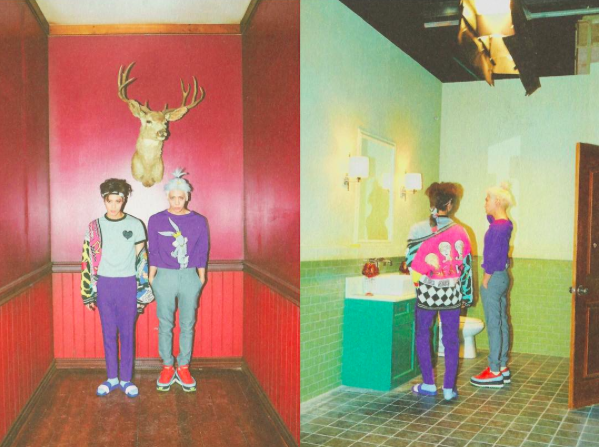 Which leads us to the highlight of the day...

So after Garosu-gil, we left for SM Town. It wasn't that far to travel to Coex because it was already just around the area.

We went at 730 I think and the event starts at 8, on the 5th floor. The escalator leading to the 5th floor was guarded by an employee so when Tania asked the girl, she said you had to register beforehand and obviously we wouldn't know how to do that.
Regardless, Tania and I chilled at the café on the fourth floor and we saw fans diligently writing notes and letters to the SHINee members. We would too IF WE KNEW HOW TO REGISTER?!?!?!

But it didn't matter, for me it was as long as I could just ***see*** them. So what we did was camp downstairs by the entrance because they had to leave the building one way or another, right?

As we expected, there were fans already downstairs although there weren't as many as we thought there would be, to be honest. There were fans who brought heavy-duty cameras and the girl next to me managed to take close-up photos of Jonghyun as they entered SM Town earlier.

We saw Amber too from f(x)! She was walking to the building and we later found out it was 'cause she was the MC of the event (we watched a live broadcast of it on our phones). I didn't think much when I saw her (because I didn't realise it was actually her) 'cause she was dressed down with a grey hoodie and capri pants, but found it suspicious that this person was escorted by a security guard. I love Amber, would have loved to see her up close!

We even saw some of the SM Rookies walk in, all wearing black with caps and masks to hide their identities. But they were all so fit and tall, it's impossible to not spot them. Some of the fangirls followed them in but Tania and I were too excited and nervous as we waited for SHINee.

They made their way down.

The guards all came down first and they had to do some serious crowd control, not that there was a massive crowd, but it only takes 2 fangirls (us) to chase after the members, don't it? Thankfully, Tania and I got to the front 'cause like I said, crowd wasn't huge so it was relatively easy to get to the front anyway.

FREAK THE HELL OUT, GUYS. You can watch it all on the video that we made (earlier post!) but here are some blurry photos of my happiness hahaha 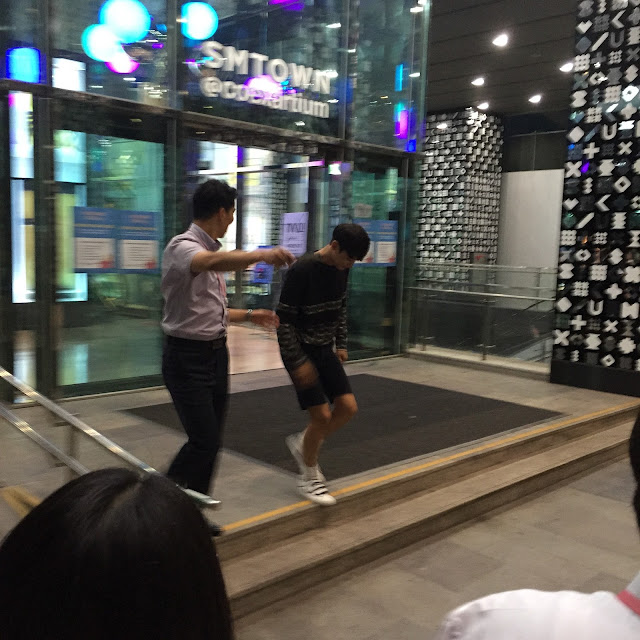 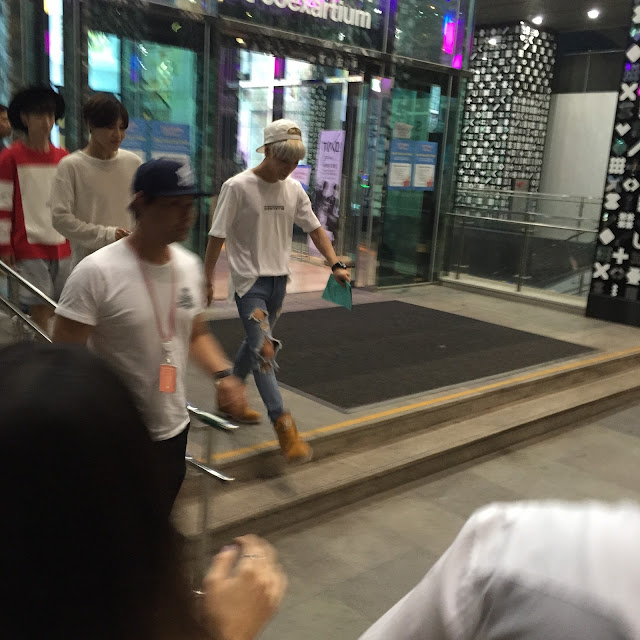 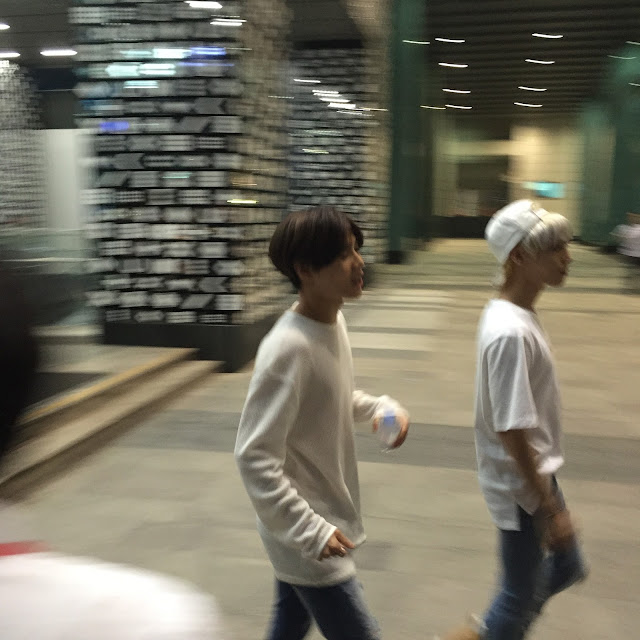 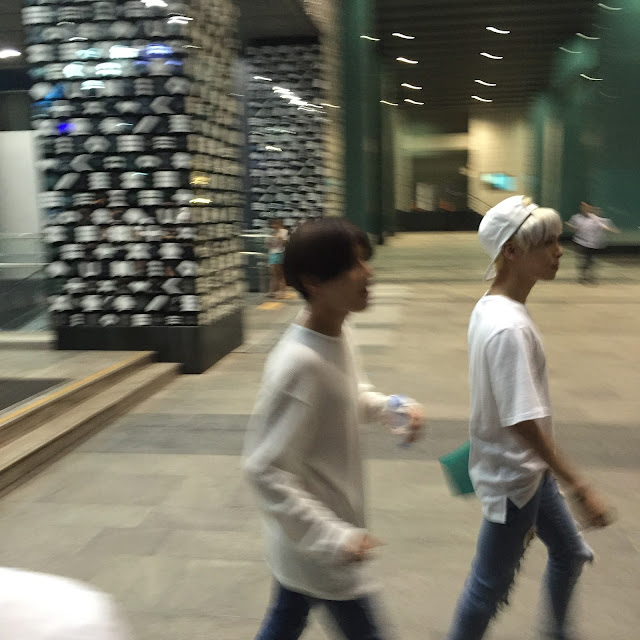 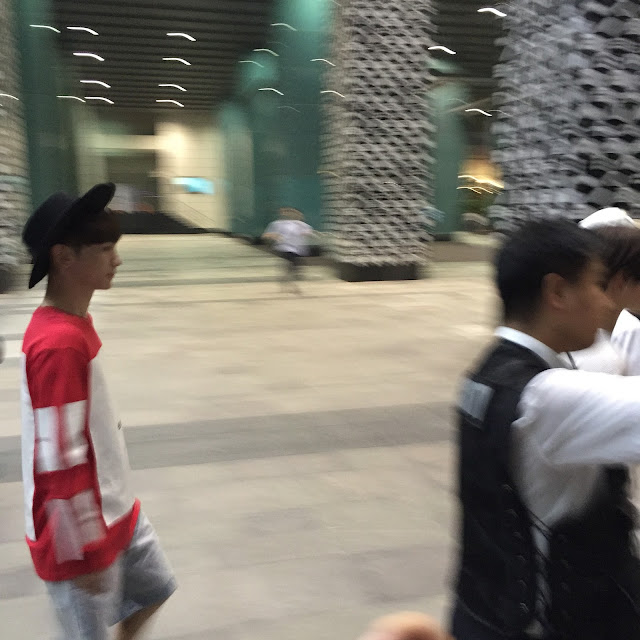 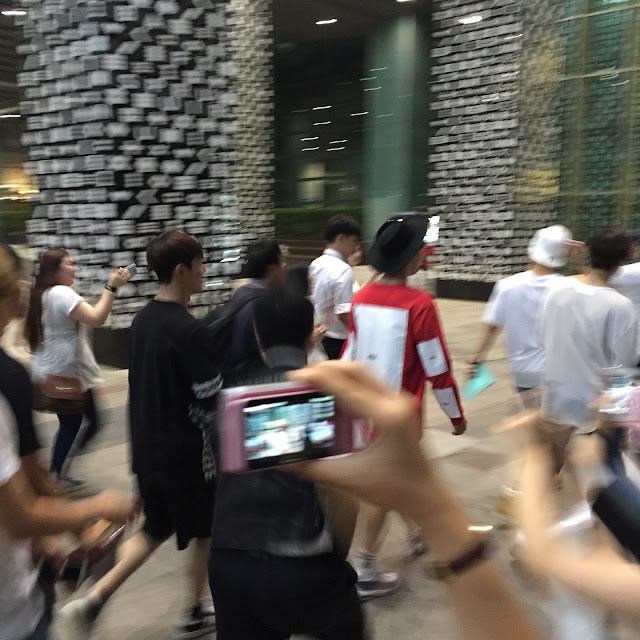 Onew was so sweet ok, he bowed to the fans !!!!!!! The others walked quite quickly to the car but Onew took the time to bow to us! How sweet!! 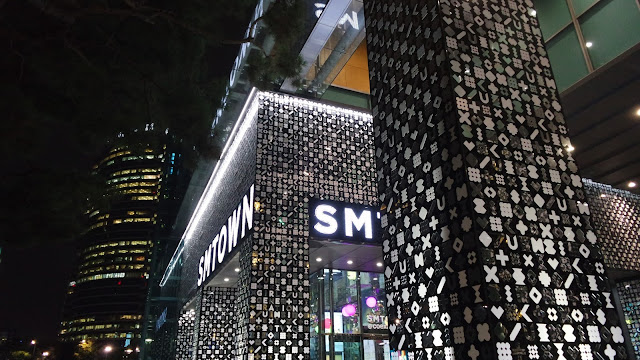 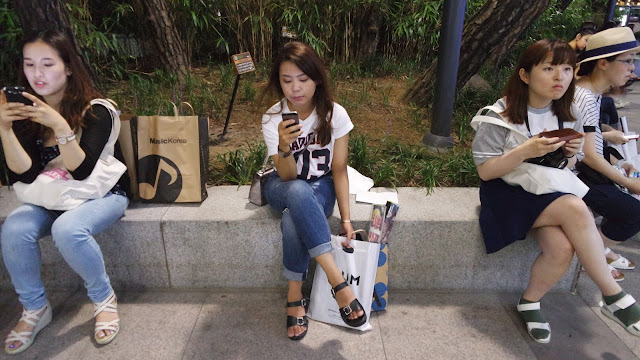 As I waited for them to come down, I kept myself occupied watching this... 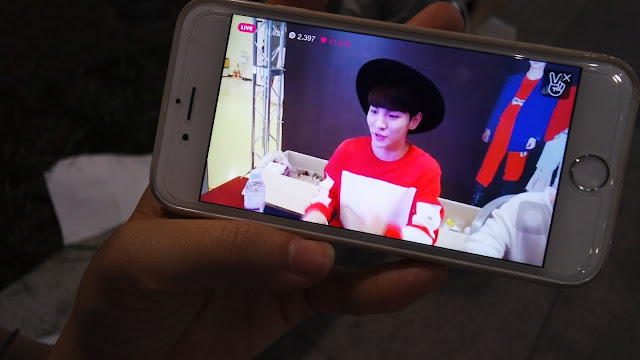 UGH THAT. WAS. SO. MUCH. FUN!!!! On cloud 9!!!! So surreal seeing them in person!!! Tania and I could hardly control our excitement along with the other fangirls. So freaking amazing and til this day, I still can't believe we saw them!!!!!

After completely losing it from seeing the boys walk pass us, we had dinner at the same Italian restaurant just downstairs and we had to calm ourselves down. We couldn't believe that we actually got to see them! We didn't have any expectations coming to Seoul to meet anyone but LO AND BEHOLD SHINEE ughhhh and for all SHINee fans, yes, they are as perfect as they look. So painful seeing Taemin omg I was just going to cry!!! We were ridiculously over the moon!

If you haven't already watched our Seoul vlog, please do go watch it! Our little frantic episode at SM Town was all caught on camera also hehe