We went to Myeongdong the first day and that was already so so so fun; skincare and make-up shops all just next to each other. Sales assistants are also SO SO helpful and they just lure you into their stores by giving you free things. And they're really generous with their free gifts.

ANYWAY, so on day 3 it was shopping day in Hongdae!!

As I've probably mentioned before in earlier posts, Tania and I are currently staying in an apartment in Hongdae so we didn't even have to take the subway anywhere for our shopping. We just literally cross the street and we're there!

We went on a Saturday so it was a given there were going to be loads of people. But I didn't mind it a bit. I usually try to avoid crowds as much as I can but this one, this crowd I particularly loved and enjoyed. It was hectic and there were just so many people but the atmosphere was amazing and so darn youthful. Music was blasting from all corners and people would just casually carry around a huge speaker and have loud music on (I obviously enjoyed their choices of music um hello Big Bang yes all day everyday) and they would just dance. It wasn't even for money y'know, it was just for them to have fun. Which was pretty amazing, their passion just showed so much it was really awesome to see that. One corner would have some guys dancing to Big Bang and in another corner, someone would be singing to a ballad in front of a crowd of girls. It was so freakin' fun to see and hang around there.

Hongdae is a combination of Hongik (the area) and Daehakgyo (which is university in Hangeul) so as you'd imagine, there were a lot of university students around the area and it was just so happening. Ugh I loved it so much!!!

So anyway, we browsed around 'til we got to an area where it was just streets and streets of shops. All so quaint but man, beautiful clothes. It was just completely my style and ugh the window displays were so damn cool and so the outfits were all so well put-together. It was so difficult to leave a store without buying something. 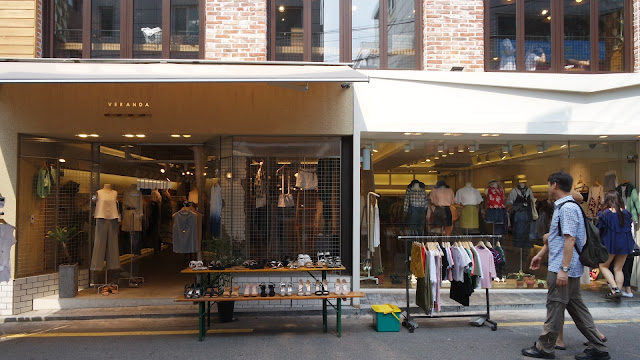 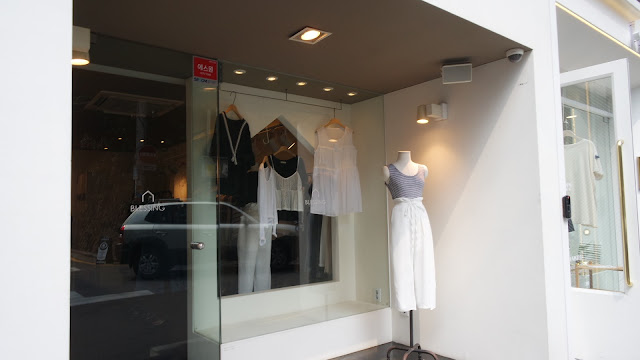 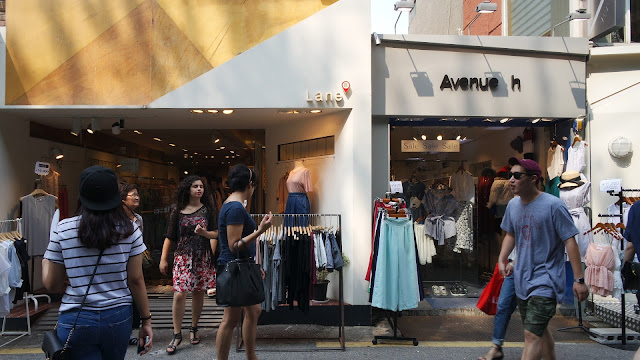 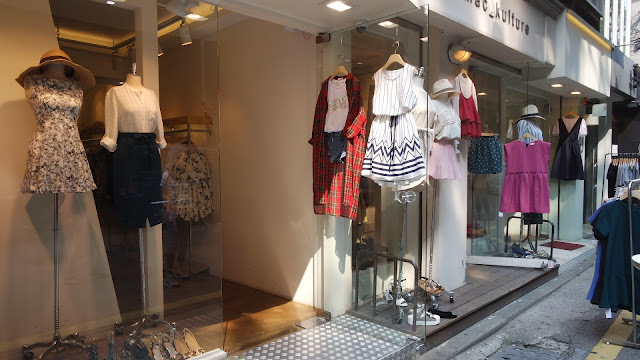 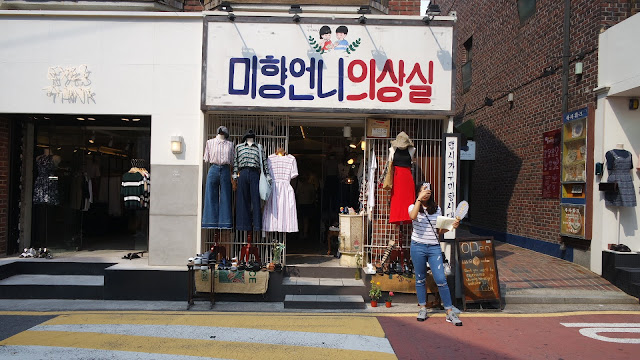 And the shop assistants are just something else lah. They're so helpful and they help you coordinate your outfit. So just say, you're eyeing a top right, and they see you looking at that top, and before you know it, they bring you a skirt and a pair of pants to match with that. It's really cool how they help you out. I try my best to communicate with them with what little Korean I know (my favourite thing of the day was being complimented on how good my Hangeul was by one of the unnie's in the store!! Hehe) and if you don't speak a word of Korean, I admit that it can be quite difficult to communicate but you just figure things out along the way. Tania doesn't speak Korean so whenever she's alone with the sales assistant, I could see that it was quite difficult for one to understand the other and I would often try my best to translate and understand the other hahaha I sound like I'm such a pro, I promise you I'm not but after learning Korean for 8 months now you kinda get the gist of what they're saying (won't lie, it was kindve an amazing feeling!).

But yeah, this was shopping HEAVEN for Tania and I. I loved everything about it. The clothes were all so simple yet so so chic and just so effortless. My main thing to get whilst I'm here is pants. It's so difficult to get nice fitted pants in KL and I'm so bored with my old pair of jeans. So I'm planning to get more in the next few days hehe ugh even thinking about going shopping in Hongdae is making me so freakin excited?!?!?!

And then we found StyleNanda. To those who don't know what StyleNanda is, it's essentially the biggest embodiment of what Korean fashion currently is. It's a Korean store with just about the sickest clothes (atleast to me) and I always go on their website to see what they have in store but I don't buy them because it's quite pricey (but it's still really cool to go see how they style clothes so if you need some inspiration, go to StyleNanda now!!). They have their flagship store in Hongdae so we had to go! I didn't buy any of the clothes or accessories, but we did buy loads of 3CE things which was so so so so ace!!!! I didn't expect it to be that affordable seeing how it is still StyleNanda. But they had so many cool things and the colours were beautiful to play around. Was quite difficult to not buy everything I swatched!!! 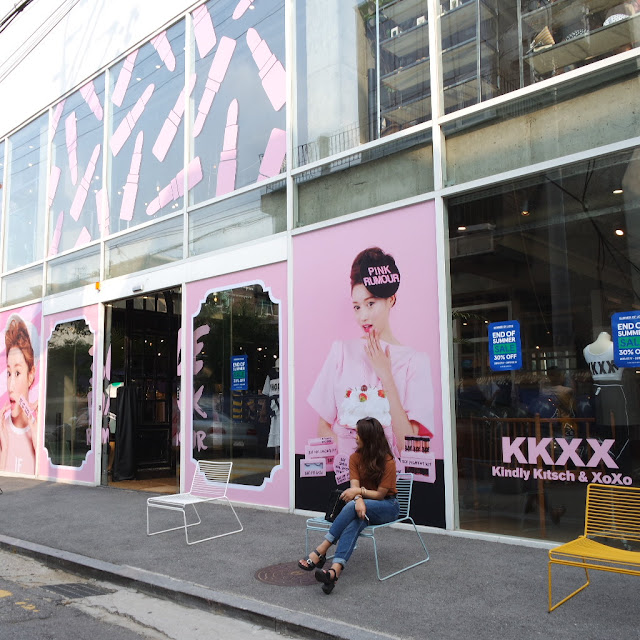 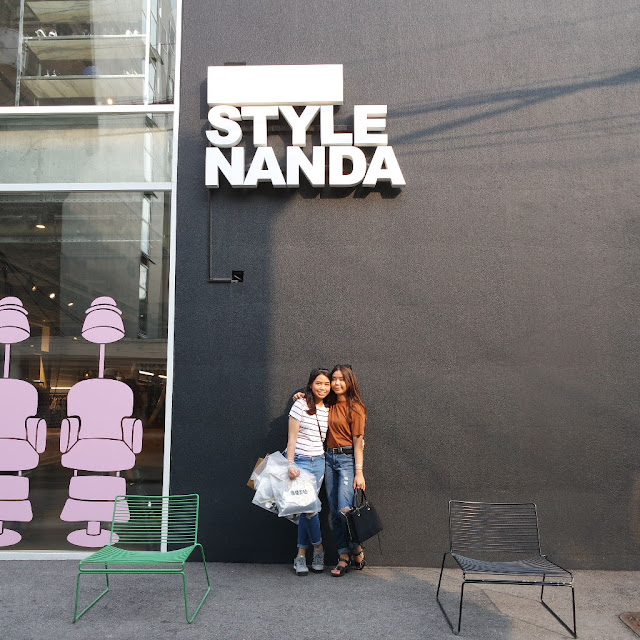 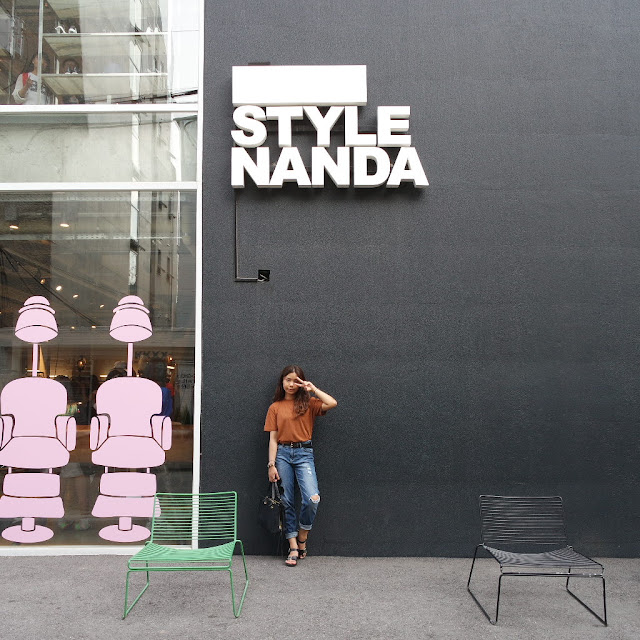 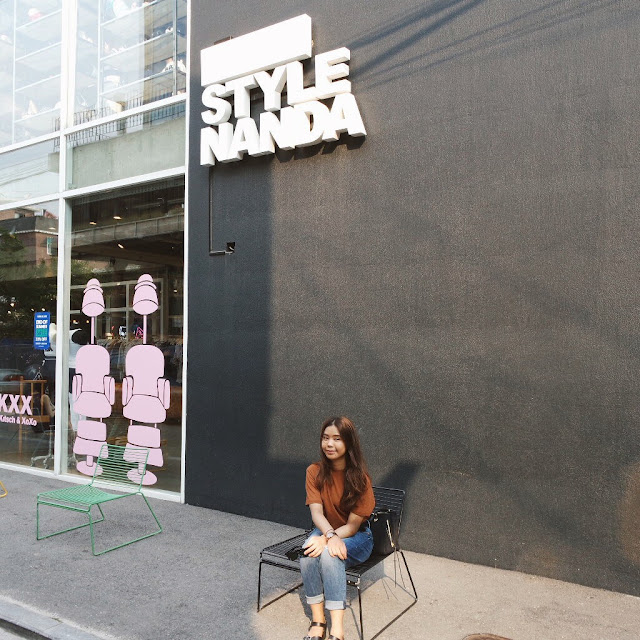 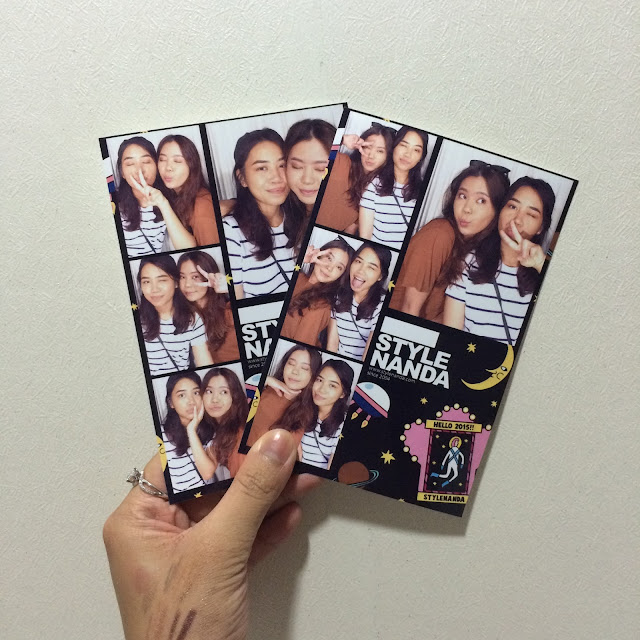 I had so much fun shopping to be honest! I haven't had that feeling in a while because there hasn't been anything in the shops anymore, both here in KL and in the UK, that has excited me like how Hongdae has. Really really fun and I strongly recommend Seoul your next shopping destination! We then hung around Hongdae before going back to our home. Hongdae is perhaps the liveliest and most happening place I've been. It was just bursting with excitement and loud music and people dancing here and singing there and just in general, having loads of fun. The streets of Hongdae was just full with restaurants and cafe's and karaoke places and clothes shops, it was absolutely amazing!!

Clothes were all so cheap also, at the 20,000W - 40,000W mark (roughly RM80-120 at the most!) for really really quality clothes you can't and won't find here in KL. Think Telawi minus the stairs and much much more variety. And the shop assistants are just daebak (Korean for 'awesome) ; if you see a top, they'll immediately pull out the same one only in 2 different colours or they'll bring you a pair of pants or skirt to match the top with. You can't typically try out clothes on though however most of em are in free sizes (even pants) so it may be difficult for those who have weird sizing. You still gotta ask if they have it in S, M or L. And they aren't as English friendly as one would think, they'd welcome you in Korean and once you start spurting out basic Korean shopping phrases you found online, they'll just go ahead and converse with you in full Korean so if you can't speak, just don't speak hahaha.

Hongdae was a dreammmmmm and we were already planning on going again seeing how we live just so nearby!