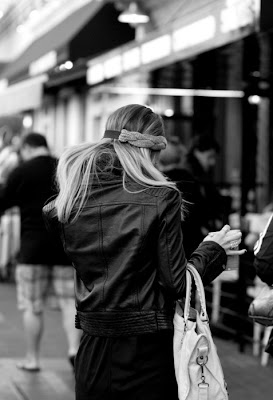 Went to OU close to 1. And I got my watch back !!!!!! :') It's about time. Lama gila bapak nak pergi repair. Anyhoo
Met Hafiz Ismail ! Cheh, pakai leather jacket lagi tuuu. Hahahaha. Told me about his trip to London and Switzerland while waiting for the others. Met up with Marc and Shahrain at Carls Jr. And soon after, Johann, Ashley, Nikki and Brenda and Belinda came. Since they wanted Subway for lunch, we all tagged along. For some reason, we had to wait before we could order because they had to mop the place first so we went in the pet shop opposite. The Chow Chow (was it?) was so cute, Nikki was in love :') It's your dog kan, Debra ? Lucky girl !
Then, we got to Subway and Hisham and Aidit were there. Had difficulty ordering seeing how it's my first time (I'm a Subway virgin). So with the help of Jo, got a Roast Beef one. Was ok ok though, and I didn't even finish it (it was 6 inches, how anyone can down a foot long is wild) so Jo ate the rest. Nikki and Ashley went to play snooker/pool, I don't know the difference and the boys went to OSC. So waited for the twins to finish their sandwich and we went up to GSC. Bought tickets for New Moon and played snooker/pool. Huge surprise that I suck at it. So ! Ate ice cream and met up with Marwan and Hafiz's friend who I swore thought was the same batch as us but turned out to be 4 years younger. Ate at the Jetty to burn time. Went in the theater just in time for the movie to start, no torturous long commercials. OK, so the movie was ok ok. But I do stand by the fact that it was still slow paced at times. But asalkan dapat tengok Taylor Lautner. Macam tak suka pulak Edward. Haha. Team Jacob lah.
Then everybody went back and it was Aidit, Shahrain, Hafiz, Asif and I. We talked about stuffs, and for some reason, standing outside of FCUK was the best thing to do so. Went outside after I got a call from my mum saying she's on the way and there was this M-150 thingy outside and the host, I guess you could call it came up to us because memang tempat tu 'happening' gila. And he asked us a question 'Who are the two personalities that are coming here?' and he gave us clues like 'She's from 8TV and she hosted One In A Million' and I answered Cheryl Samad because I thought she was from 8TV and hosted the show. I got it wrong and the host must have been that desperate to tell us 'Ok ok, her name starts with the letter M?' and we, being total airheads, were still figuring it out until the host then tirelessly helped '.. and ends with an N' and then, baru lah otak berfungsi sikit and I said 'MARION!'. Kah kah. Nasib tak banyak orang. Got 2 cans of.. ok, I don't know what exactly. Macam Power Root Ali tu ke apa benda lah. Hahaha. Then, I went back while the rest got dragged by the host to some Wheel Of Fortune thingamajig.
And I had Otai burger for dinner. (Y) Tomorrow's another outing. I haven't exactly told my mum haha. See you girls & guys tomorrow, can't wait x
Written (technically typed) by Nadia Zainudin at 9:39 PM