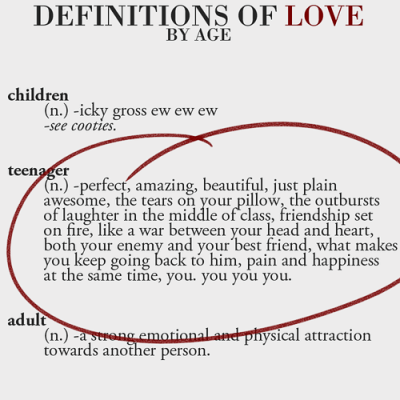 Why won't I have a boyfriend ?
Because I'm 16 and I've pledged to myself not to have one til I hit 17 or well looking at the circumstances (SPM, for those late catchers), I'm delaying it to a year now so, 18. I want to have to figure out myself first and even if that came off as cliche and corny, it's entirely genuine. I want to know what I'm good at and what I'm capable to do and what I want to do before figuring out anyone else's. I have only respect and admiration to my friends and others who have had a boyfriend for a long period of time because it shows me loyalty really exists *cue fake gasps. C'mon, it's no big secret that there's people among us who have had ridiculously short lived relationship, I have a friend whose 'relationship' lasted overnight.. which is as ridiculous as ridicule can stoop. They don't count as an ex, they're just acquaintances that you decided to 'like' because they i) are good looking ii) liked you in the first place which makes you feel all proud and mighty so you returned the favour by liking (give or take) him/her back iii) sweet talk you into a relationship.
'I Love You' has become a trivial phrase. It, to me, does not bring any significant meaning as I hoped to because people here abuse it. After a 3 day non stop texting frenzy, you decide to 'love' this person and ergo 'I love you'. And with that, you're a couple and before you know it, a week later, you're broken up and you're drenched in your own tears and the whole 'I want to kill myself' jig goes up. I'm not committed just yet so for me, relationships are saved for later. There's no shame of flying solo, I've been doing it all my life and I'm doing great. So I laugh at the idea of some people and their obsessive need to have a boyfriend/girlfriend. It sounds a bit foolish when you get asked 'How many relationships have you been in?' and you take 5 minutes to count. Texting doesn't make you a couple, and so does internet chatting btw. If I do get involved, I want my relationship to be full of love, laughs, disagreements (because that's where it gets fun) and arguments, loyalty and honesty. I want to be someone when I'm at total ease with and I can talk to about anything in the world without feeling forced. Unfortunate for me, my crushes are pretty much a one way road thing, I don't get the mutual feeling from the opposite party because well, that's the whole idea of a crush, you just adore from afar and I'm too much of a coward to initiate the first move. Or maybe I don't want to be in a relationship because of the messy post break up. What I really really really find attractive in a guy is his easy going, laid back attitude, who is intellectual and different and I'm very old fashion so I always think those who have a loving relationship with his family pleases me to no apparent end. I love a real relationship and one that goes on seemingly forever and it tickles my fancy when I see a couple who has been together at what seems to be an eternity so that's what I want and if that takes me a couple more years to open my heart and establish a romantic relationship, then so be it.
No offense at all to anyone because this is not aimed at any of my friends, I'm just saying in general because I know a friend of a friend of a friend of a friend of a friend of a friend who indulges in being in a couple.. constantly.
And I have this Hari Koko at school tomorrow so I'm sleeping in 3.. 2.. 1.
Written (technically typed) by Nadia Zainudin at 1:37 AM