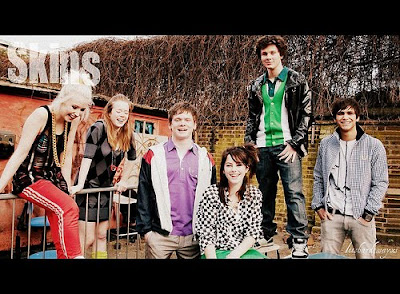 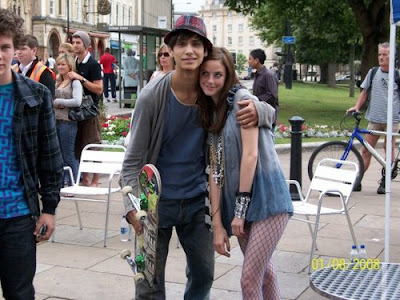 Ok, now that I'm done watching Skins (I'm tearing up inside, the next season is in 2010, motherfreakin sad k for me) I can finally do some other things, some productive things. I've been cooped up in my room ever since I watched Skins, first season, first episode, first part. I'm addicted to tv shows, it's mental.
ANYWAY, omg Skins Season 3 best gila but again, not for them people who aren't as open minded as us (Amy and I). Less humor though, more drama and at first it was a bore but it got alright in the end. Man, I freakin love Freddie and Effy together. Cook decided to become all vulnerable in the end which is so typical of tv shows to do that and when *SPOILER! SKIP THIS PERENGGAN IF YOU ARE A FAN AND HAVEN'T REACHED THIS PART OF THE SERIES* JJ assembled 'The 3 musketeers" and Effy (basically, the object of their affections, yeah all three of em), JJ asked Effy to choose between Cook and Freddie and Effy gives a longing look to Freds which made Cook get the idea that she chooses Freddie over him and stormed off. Ntah kenapa tapi sweet gila baaaaaaaaaaabs. He's also the more sensible one and well, Cook's an arse.
But HEHE, JJ so cute la with his Asperger syndrome and all :') OH ada one time tu, when it was their first class in college and were asked to introduce themself, Freddie said, "I'm Freddie and I met a girl I liked today. She's beautiful." Tahu ntahpape but this freakin Skins k, not The Notebook so no sappy love scenes, this is the best you could get out of them. But man oh man, I don't mind having a lad like Freddie McLair as a boyfriend. He's the sweetest la weiiiiiiiii, ee geram. But the show's goes around smoking weed (a hell lot), drugs, screwing each other, swearing on an average of 100 times a scene and looking so messed up, but it's a change from the usual on tv (not that I'm complaining, GOSSIP GIRL FTW).
But I don't know which season I like best because after seeing Freddie and Eff, rasa macam best pulak haha. Bosan la pulak takde Skins dah :'( Bukan takde lagi, tapi for the next season (yang ada 8 episodes je wtf?!) to come out in 2010 is quite crazy. Gila tak sabar. There's going to be the American version, wonder if it's any good.
Conclusion : Skins is on my list of Choice TV Shows, Elizabeth Stonem and Freddie McLair have become one of my favourite couples (I don't even know if they officially are one seeing how Cook's being a bitch about it and baru sekarang nak fall in love dengan Effy padahal Freddie dari day one dah head over heel over her k !), and I have one more line to habis hafal pidato tapi first line dah lupa -_____- THIS IS NOT CALLED PROGRESS.
Yeay tomorrow sekolah woohoo
Written (technically typed) by Nadia Zainudin at 11:36 PM