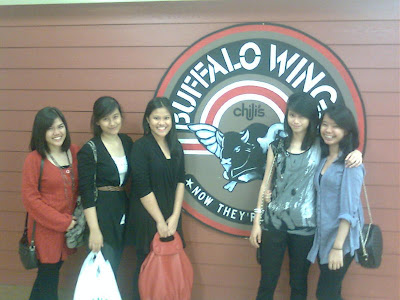 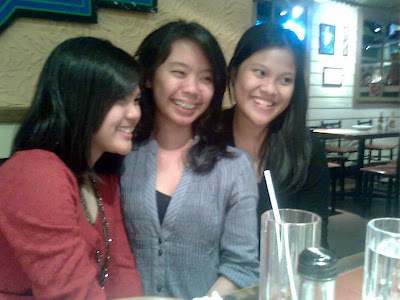 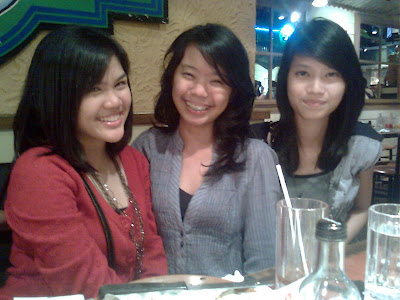 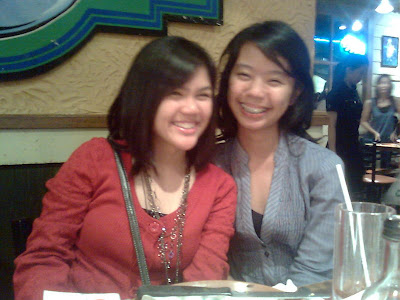 I finally went out with the budak asrama :) Berkurun tak jumpa Najihah, Suraya :')
SO OK
At 2.30, I left the house and headed to the library to meet Suraya because I called her house previously and someone told me she was over there so I decided to pop in and surprise her haha. After that, I went to OU and met up with Ila, Hafeez, Hafiz Ismail, Haris and Hanif. Ila went back short after I came. Met with Hafeez for what ? 10 seconds before he went some place else. Heh. Walked around aimlessly with the three boys and contemplated on watching a movie but couldn't decide on what to watch so in the end, I didn't join them watching The Proposal because Suraya was coming later so nanti dia sorang pulak. Had a good time going around with Suraya, I'VE MISSED HER :'( Went around for her baju hahaha, and talked a whole lot regarding everything there is to tell. At around 5 (or was it 6?), met up with Aimi, Najihah and Sarah at GSC. Settled at Chillis by then since they don't take reservations. Met up with Najihah's parents and we sat all the way back. Ordered our food and it arrived 5-10 minutes before Maghrib. Bila dah buka tu, sedap gila babi pulak kan the food hahaha. Nampak sangat lapar :') When I was with Suraya, we listed so many things to eat tapi lepas makan kat Chillis, we couldn't be bothered dah. Didn't meet anyone in particular and seeing how it WAS a Tuesday, not so surprising haha. Had a good share of laughs and catching up amongst us. Went to a bunch of shops after that and met Kai Wen at Forever 21. Damn son, you see her and her too flat of a tummy, you'll feel huge. Stay away from her if you know what's best for your self esteem.
Suraya and I were too lazy unlike the others, to try on clothes so we just hung around. I was already too bloated and tired to think. Met Sha on the way with her sister. Went to Topshop and my mum called so I had to leave.
All in all, it was a good outing :') I've missed my girls a whole lot. Haris Hanif Hafiz tak yah rindu la, dah jumpa selalu kat sekolah kan :) Heheh.
P/S : I went to the watch shop to change my watch battery when it decided to ditch me at my time of need (i.e. Test !) but the lady said something's wrong with the circuit so I now have to go to the Juicy Couture store in Pavilion and we're going this Thurrrrrrrrrrssssdaaaaay. The thought of going there always cheers me up hahahaha. RAYA SHOPPING (Y)
Written (technically typed) by Nadia Zainudin at 6:29 AM